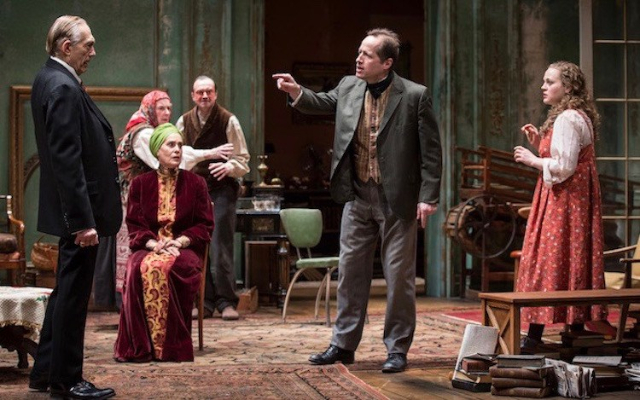 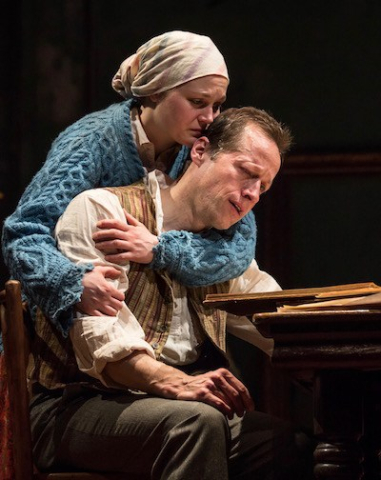 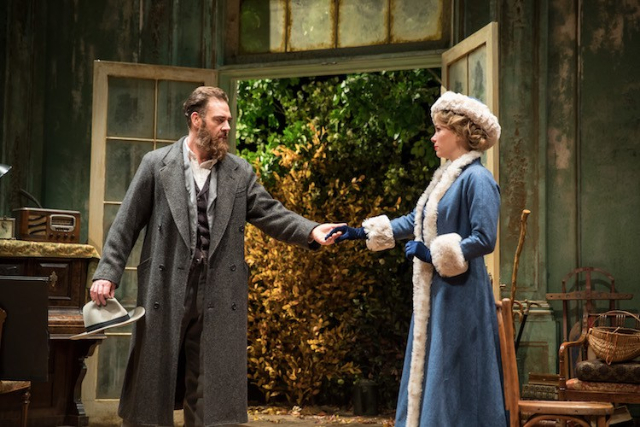 Chicago has been blessed with several visits by Anton Chekhov’s Uncle Vanya in recent years. Some of them have been fairly traditional renditions (Tuta Theatre Chicago in 2009 and Strawdog Theatre and a Russian touring company at Chicago Shakespeare in 2010). Life Sucks by Aaron Posner at Lookingglass Theatre last September reimagined Chekhov’s characters and language. And farthest afield, Vanya and Sonia and Masha and Spike, the Christopher Durang comic turn at Goodman Theatre in 2015, put Chekhov’s ingredients into a blender and chopped them into new characters and plot points.

The truest and most palpably Chekhovian version of Vanya may well be Annie Baker’s new translation/adaptation, which opened this week at the Goodman Theatre, directed by Robert Falls. Baker says she wanted her contemporized language to sound to us the way it probably did to Russian ears in the play’s first production in 1899. She has written a conversational and naturalistic script that does fall easily on our ears, while retaining Russian literary and historical references.

Uncle Vanya is the story of several branches of a Russian family living in a country house, trying to survive and retain their landed-gentry way of life. It’s also a story of love and rejection, but everyone seems to be in love with the wrong person.

Vanya (Tim Hopper) and his niece Sonya (Caroline Neff) manage the property and servants and send income to her father Alexander Serebryakov (David Darlow), an elderly professor married to his second wife, 27-year-old Yelena (Kristen Bush). (His late first wife was Sonya’s mother.) Now Alexander and Yelena have come to stay at the country house, causing chaos in the family routine.

Marina (Mary Ann Thebus), the nanny, says, “We used to have lunch at one, like normal people. Now we eat at six or seven …. Then at night the professor wants to read and write but at two a.m. he’s calling for me …. To wake everyone and put on the samovar.”

But most of all their visit causes emotional turmoil because Vanya and Dr. Astrov (Marton Csokas) both fall in love and lust with Yelena.

Meanwhile Sonya admits she’s in love with Dr. Astrov. Yelena befriends her and decides she can help Sonia by confronting Astrov to find out if he does or can love Sonia. (Not so secretly, Yelena has fallen in love with Astrov too. She’s bored to death living in the country.)

The emotional disarray comes to a head when the professor announces they should sell the house to provide enough income for he and Yelena to live properly in the city. This brings the family feud front and center and Vanya explodes. But since the house by lineage belongs to Sonya, the sale won’t happen. Alexander and Yelena leave for the city.

When I reviewed Life Sucks, I said it’s a story “in which members of the rural bourgeoisie loll about, falling in love with the wrong people and longing to change their miserable lives.” Whether Uncle Vanya is played traditionally or reimagined, that is its story. Living amongst beauty and bored to tears, the characters each in his or her own way eventually face the meaning of their lives.

Director Falls has assembled an outstanding cast of actors from Chicago and beyond. Hopper plays a soulful and sympathetic Vanya, while New Zealand native Marton Csokas gives a strong performance as his friend Astrov. Neff and Bush create mesmerizing characters in Sonya and Yelena. Falls’ direction of the 2-hour-45-minute play is smooth and naturalistic, befitting Baker’s adaptation.

Todd Rosenthal’s set design is a lovely terrace of the country house, opening on to a garden. Ana Kuzmanic’s costumes range from traditional long gowns and ethnic wear for servants to more modern short dresses for Yelena and quite modern-looking suits for male leads. Scene changes were accompanied by lively Russian melodies.