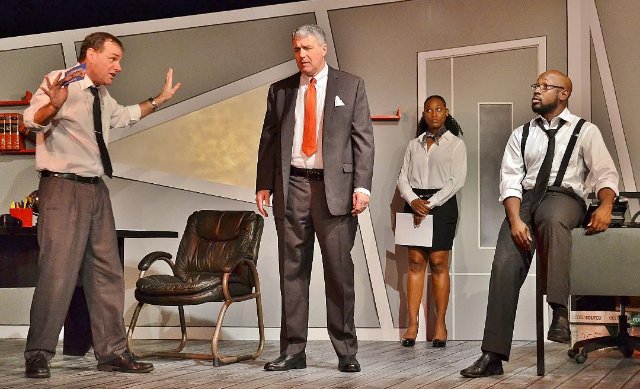 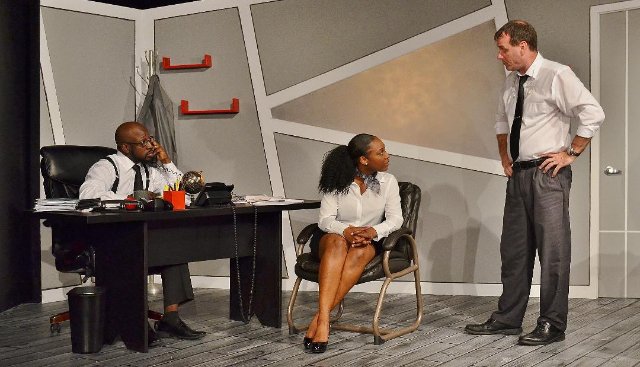 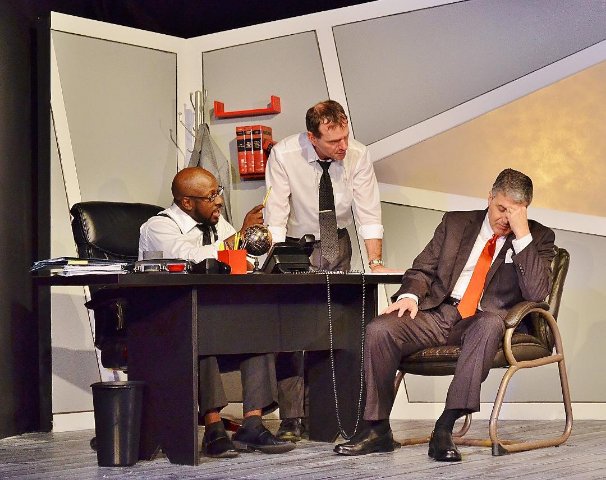 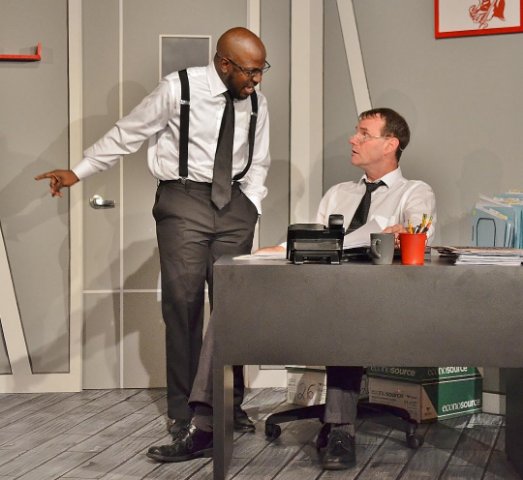 Specifically, at the very beginning of the production, rape defendant Charles Strickland enters the law office of Brown and Lawson. He extends his hand to black attorney Henry Brown. But, the lawyer refuses to shake the man’s hand. That is, despite Stickland keeping his extended.

True, Brown doesn’t say why he keeps his hand to himself. However, the answer, many might conclude, is race.

To be sure, the mammoth issue of race has plagued society since most people can remember. But when Race premiered in 2009, Americans were celebrating after electing Barack Obama, the first black U.S. president. Today, that seems like ancient history. Indeed, to some, it may seem like we’re now living through a second Civil War.

Put aside the fact, for a moment, that theaters often stage African-American themed plays in February -- Black History Month. Instead, consider that shortly after an Alabama newspaper editor recently urged the Ku Klux Klan to “ride again,” and essentially advocated for lynching to return, we sorely need to see a play like Race. We need it to disturb us, to keep us from complacency.

The cast and crew treat Race with the unapologetic frankness, urgency and steak knife-sharp satire with which Mamet wrote his play. As a result, we gasp and squirm in our seats. Of course, the hope is that this dizzyingly complex play will move us to examine our own prejudices and do our part to heal the wounds inflicted by racism.

Although Mamet has written parts of Race in a highly intellectual manner, this production keeps us riveted to the stage. The pace is brisk and the suspense is steady. Even as we laugh and squirm at the same time, we feel as though we’re reading a page-turner with twists and turns.

Credit must also go to Williams and his cast for nailing “Mamet Speak.” That’s the distinct style of dialogue for which the Pulitzer Prize-winning playwright is known. It’s terse and clipped. Dialogue overlaps, with characters cutting each other off. The playwright emphasizes certain words to reinforce a satiric statement, or to simply highlight a word to make a point.

No doubt, a highly-competitive environment exists in the law office where the play is set. We especially sense that through Christopher Dreeson’s terrific portrayal of white lawyer Jack Lawson. It amounts to some of the best acting you’ll witness on a stage. Except, you never sense that it’s “acting.” Indeed, Dreeson lives and breathes Lawson, slipping into him and disappearing into the character.

Dreeson invests each and every word, gesture and facial expression with shocking spontaneity. Whether he speaks in a sing-songy, sarcastic tone, widens his eyes in a startled state or speaks in a growling whisper, conveying a mix of anger, disbelief and perturbation, nothing ever feels forced.

You always sense that a scheming, quick-thinking, aggressive, showy attorney who loves an audience is hard at work, preparing for his next case.

Meanwhile, Keith Oliver gives us a no-nonsense, street smart, confident and brutally honest Brown. And, like Dreeson, Oliver lends Brown an urgent intensity. This is particularly true when the character aggressively leans into Strickland’s face.

Speaking of the rape defendant, Brian McCormack injects him with noticeable nervous energy. He shifts uncomfortably in a chair and fidgets. But at other times, it is clear this defendant will not let these lawyers intimidate him.

For that matter, neither will their assistant, Susan. At the start of the play, Trittney Huzzie plays her with an open-minded, eager-to-listen aura. It’s as though she’s an attentive yet quiet law student. But as the play progresses, Huzzie’s Susan casts suspicious and accusing glances at her bosses. As Huzzie portrays her, Susan gains more confidence as the production progresses. To say much more about Susan, the only character to whom Mamet does not give a last name, would be to spoil the story.

Race deals with a host of issues, including gender and racial bias in the workplace. Also, the unabashedly direct, often vulgar, yet poetic Mamet (his “profane poetry” can leave us winded) constructs a labyrinth of bias, hubris, shame, guilt, deception, regret, perception, exploitation and ambiguity.

After all, whoever said race is a neat, simplistic, straightforward concept? No, it’s a simmering volcano, and it has erupted countless times, with often devastating consequences.

As a matter of fact, one might compare the topic of race to the sequins sporting the supposed rape victim’s dress.

“Somebody sneezes, those sequins are coming off that dress like rain,” Lawson says.

Meanwhile, in our divisive society, simply breathing the wrong way during a discussion of race could lead to a spilling of secrets, finger pointing or a pouring forth of accusations, related or unrelated to the discussion.

Also, perhaps Jade Mesa’s scenic design symbolically suggests how race is anything but a straightforward topic. One of the set’s walls descends in a downward slope, suggesting an off-kilter appearance.

Needless to say, we live in a world that is off-kilter in many ways.

Main Street Players’ production of Race continues through March 17 at the Main Street Playhouse, 6766 Main St. in Miami Lakes. Show times are 8 p.m. Friday and Saturday as well as 2 p.m. Sunday. Tickets are $30 (general admission) and $25 for students and seniors. Call (305) 558-3737 or visit www.mainstreetplayers.com.