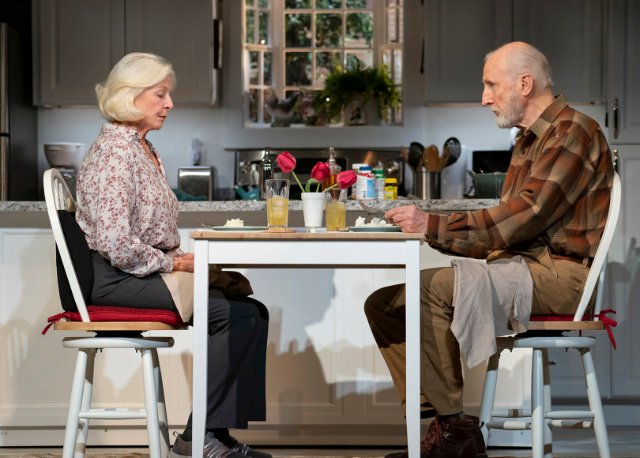 About ten minutes in to Grand Horizons by Bess Wohl, the play currently at the Helen Hayes Theatre, I want either the Nancy or Bill to tell their two self-absorbed adults sons that it really isn’t any of their business and to butt out.

Of course, that would have meant a very short play, and to be truthful, the sons do have an emotional involvement.

The couple, married over 50 years and now living in an independent living house, have told their sons they will be getting a divorce.

Actually it is Nancy who matter of factly says “I want a divorce” over lunch.

In the next scene the two late 20s – early 30s sons, Ben and Brian as well as Ben’s wife Jess are all in the living room. They don’t necessarily want to understand why this is happening; they just want to stop it because it will cause them to reexamine their perceptions and memories.

That Nancy and Bill don’t force them to leave, is difficult to understand. The two allow themselves to be pressured into discussions, hand holding, and more. Some of it borders on bullying.

Wohl, apparently thinks it is OK for adult children to bully elderly parents.

Unfortunately, after the set up not all that much happens. There are some amusing moments: Brian’s neediness (he is the younger son), Ben’s take charge attitude, the cracks in the marriage between Ben and the very pregnant Jess, who is some sort of therapist and more. Of course, there is the surprise at the end of the first act.

There is more of the same in the second act. The funniest moments are when Nancy tells Brian of her first love and graphically describes a rendezvous with him that occurred when Brian was a child. Like all children, Brian does everything to try to avoid hearing the details. The image of it will undoubtedly remain with him forever.

Another moment worth seeing is Carla, played by Priscilla Lopez and Nancy talking. Carla, another resident of the complex, is Bill’s girlfriend. In the friendliest way possible, Nancy lets Carla know of her future with Bill, who has had a stroke.

The ending is conventional.

What sets this apart are the fine performances. Any chance you get to see Jane Alexander on stage is one to take advantage of and treasure. Her Nancy exudes both steeliness and calmness. And certainly, seeing Priscilla Lopez in what is almost a cameo is another delight. As she begins to realize how her life would change if Bill moved in with her, a range of emotions flicker across her face.

The entire cast is excellent. James Cromwell as Bill, Ben McKenzie as the officious and smug Ben, Ashley Park as Jess his wife, and Michael Urie as the needy son. Brian make these characters come alive, in ways that may not be in the script.

Grand Horizons, however, missed the opportunity to provide us with something to think about.

Grand Horizons is at the Helen Hayes Theatre through March 1. It is a production of 2nd Stage. For tickets visit Second Stage