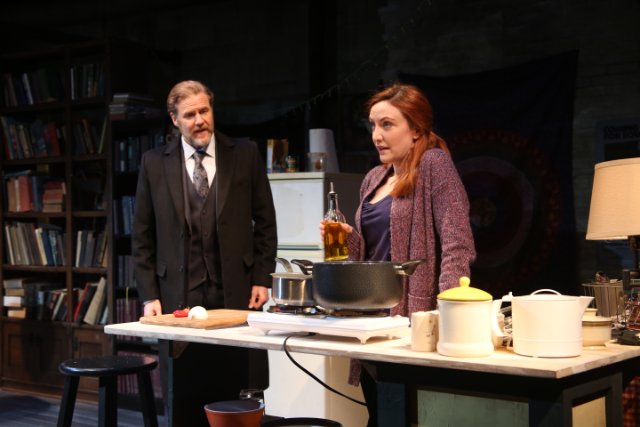 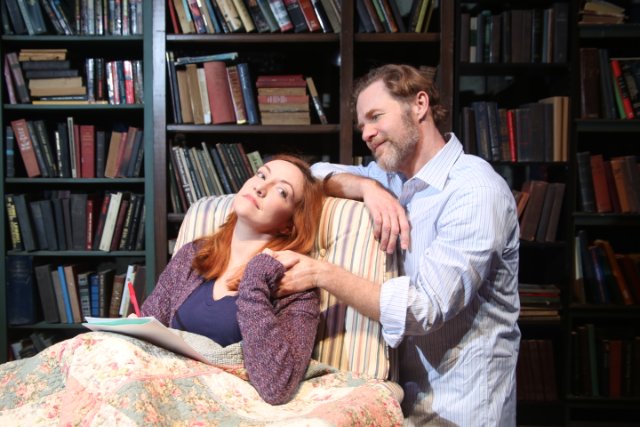 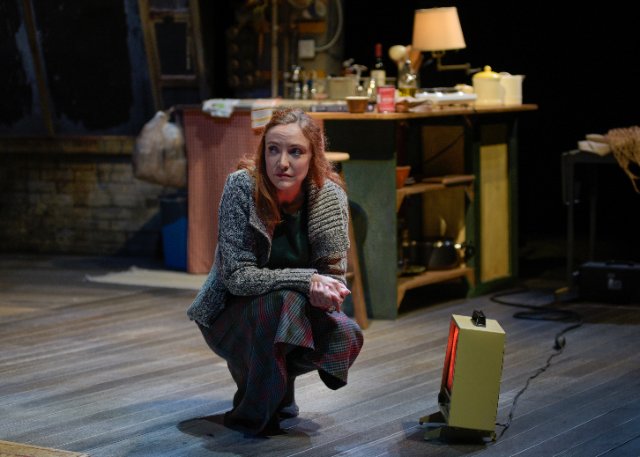 Echoes of Henry Higgins and Eliza Dolittle emanate from the stage in Skylight.

It is the curious title to British playwright Sir David Hare’s complex, compelling, Olivier Award-winning play, set in post-Thatcher England. The piece centers on former lovers trying to rekindle feelings they once had for each other.

But in order to do that, they will have to at least tolerate each other’s widely divergent views.

Specifically, Kyra and Tom differ on topics such as class, sex, politics, morality, people’s worth, privilege guilt, happiness, success, and our responsibility to each other.

Clearly, converting each other to an opposing viewpoint will be harder than Higgins’ effort to transform Dolittle into a lady.

The comparison to Pygmalion/My Fair Lady’s much-loved characters isn’t far-fetched. That is, if you watch and listen closely.

South Florida theatergoers have the chance to witness Skylight, thanks to Palm Beach Dramaworks’ intense, heartfelt production. It runs through March 1 in the non-profit, professional company’s intimate playing space.

The performers, many of whom possess New York credits, prove they’re at the top of their craft. Their line readings sound impressively spontaneous and they inject nuance as well as intensity into their performances.

Sergeant isn’t that far a leap from My Fair Lady’s confirmed bachelor.

True, Skylight’s character has let not one, but two women in his life. They are Alice, Sergeant’s wife, who, when the play begins, has been dead for a year.

Another of Sergeant’s women is Kyra Hollis, who carried on a six-year affair with him. The romance took place while Hollis lived with Sergeant’s family, with whom she grew close. Kyra, a schoolteacher, is roughly 20 years younger than Tom Sergeant, a restaurateur.  Unfortunately for the lovers, Alice learned about her husband’s infidelity. As a result, Kyra left the family to start a new life.

Apparently, after a while, Tom grew accustomed to Kyra’s face. And so, he arrives, unexpectedly, to Kyra’s worn-looking flat in a run-down London neighborhood. He wants to reconcile their relationship.

However, each character’s firmly-held beliefs stand in the way, resulting in intense conflict.

The mostly-plotless Skylight features erudite writing, as well as stinging dry humor and irony. The fast-paced, character-revealing dialogue, and alternating monologues, allow the nuanced viewpoints of these three-dimensional people to shine through.

Hare allows Tom, who espouses conservative views, and Kyra, liberal, to fully and articulately express their stances. Meanwhile, the knighted, prolific playwright refuses to champion one character over the other, or take their side. In fact, you may find yourself frequently shifting alliances between characters.

One cannot easily lump Tom and Kyra into neat categories such as “protagonist’ or “antagonist.” Rather, they are rich and complex characters. For instance, Tom ensured that his dying wife spent her last days in a room with a view of nature and a skylight over her bed. It becomes clear that he genuinely loved her. Yet, he carried on a six-year affair with Kyra.

Speaking of her, Tom admits that during Alice’s illness, he longed for Kyra because “she’d know what to do.”

So, he obviously valued Kyra as more than a sex object.

However, Tom places much less value on others.

Kyra to Tom: You used to tell me you had this great gift. I remember, you prided yourself on what you called your man-management skills. And yet you still treat people as if they were no better than objects.

Tom: You ran and left us.

Tom: You did what you said people never should do.

Kyra: I had no alternative. I had to get out of Alice’s way. I had to make a new life of my own.

He is referring to his ex-lover’s near-poverty living conditions. Why, he wonders, does Kyra choose to live like this.

In a way, Kyra is the opposite of Eliza Dolittle. That character hailed from poor beginnings and desired to live as a proper, wealthy lady. Contrastingly, Kyra grew up privileged, attained a university degree and yet she chooses to live in her worn flat (designed to look shabby and with detail by Bill Clarke).

Tom: You’re the only person who has fought so hard to get into (the neighborhood), when everyone else is desperate to get out!

Yet Kyra, like Eliza Dolittle, is passionate. In addition, she wishes that others treat her with respect. And she defends herself against Tom’s smart-alecky, sometimes arrogant and belittling comments.

As the play progresses, the heat intensifies as these characters passionately argue their position.

To her credit, director Vanessa Morosco slowly builds to an intense and tense atmosphere. In fact, at first, the mood is laid back and charming. As a result, Morosco achieves variety in the pacing and staging.

Acting wise, the performers excel. The fact that they perform various actions as they talk helps them achieve spontaneity.

Sarah Street delivers a multi-faceted performance as Kyra. Street endows her character with charm and a free-spirited aura during her opening scenes with Tom. Eventually, she smoothly segues into a fervent, confident woman who refuses to let Tom demean her.

Street’s performance, like the others, never feels forced. Playing Kyra is extra challenging since she cooks a meal onstage. To her credit, Street handles props with ease and prepares food like a veteran in the kitchen.

Meanwhile, as Tom, Peter Simon Hilton drips arrogance and smugness. But he also finds his character’s vulnerability. And the performer’s expressive eyebrows help etch expressions of pain into his face. this comes handy as he talks, for instance, about his late wife’s last moments.

In order for this play to truly work, we must sense that, despite their verbal sparring, Tom and Kyra still harbor affectionate feelings for each other. The actors make us sense that underlying affection. The push and pull between the characters’ verbal war and their affection keeps us in suspense. Specifically, we wonder whether, in the end, they can rekindle their relationship by putting aside their differences enough to become a couple.

Scenes between Kyra and Tom’s son, Edward, bookend this play. Edward is a smaller, yet important role; the presence of the young man allows him to air his feelings as to how Kyra leaving his family affected him. After all, she was sort of a sister-figure to Edward.

Harrison Bryan, as Edward, conveys credible hurt as he accuses Kyra of abandoning him and his family. Also, Edward communicates his feelings about his father. Subsequent scenes allow us to make up our own mind about Tom.

Meanwhile, it’s easy to quickly draw conclusions about Edward. At first glance, one might brand the younger man a slacker. Bryan plays him with a hint of rebellion. Bryan’s Edward is a young man who talks loudly and can barely remain still. And he speaks with more of a cockney accent than his polished dad.

In keeping with Palm Beach Dramaworks’ tagline, “Theatre to Think About,” Skylight offers plenty for audiences to ponder well after the curtain closes.  From forgiveness to betrayal, parenting to education, methods of grieving, perspective, politics, and moral ambiguity, this play is packed with big ideas. Unquestionably, they stimulate the mind.

A quibble: Skylight needs a better title. With all that Hare discusses, it’s a wonder that he titled the play after the skylight above Alice’s deathbed.

With that said, Hare’s clever wit and a first-rate Dramaworks production adds up to a vastly entertaining and thoughtful evening of theater.