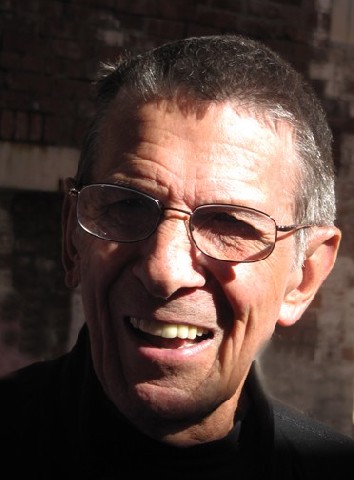 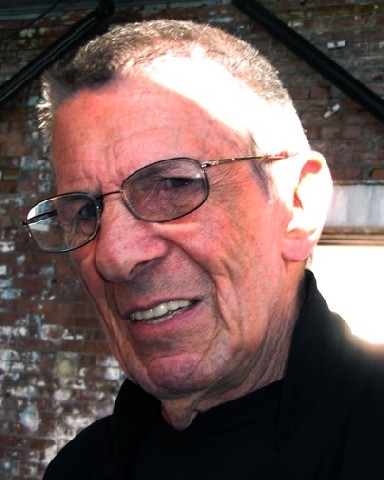 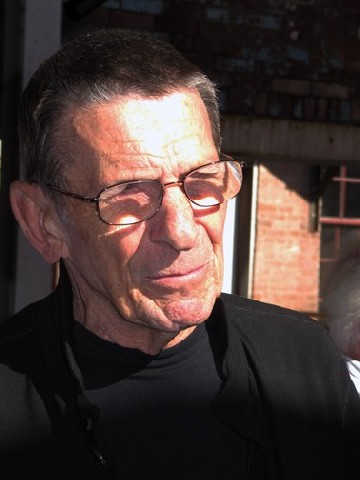 There was much more to Leonard Nimoy than the pointy ears he wore as the wise and dispassionate Mr. Spock in the popular Sci Fi television series Star Trek.

The renowned actor and playwright was born in Boston on March 26, 1931. Although he quit smoking some 30 years ago he died this week from complications of COPD.

While remaining active with creative projects he cut back on public appearances because of poor health in recent years.

During the summer of 2010 he thrilled an enthusiastic group of Berkshire Trekkies when he interacted during an exhibition of his photographyn exhibition Secret Self at Mass MoCA.

That was August. He was scheduled to return for a lecture on  Thursday, October 21, 2010 at 5 PM. That was abruptly cancelled when he was taken to the emergency room of North Adams Regional Hospital. As is all too typical it took forever to be treated. A concerned call from Mass MoCA director, Joe Thompson, moved things along.

What follows is an account of our encounter with Nimoy.

Leonard Nimoy, 79, best known as the Vulcan, Mr. Spock, from Star Trek has been a dedicated photographer since he was a child.

Yesterday, he opened his first museum level exhibition, a series of images comprising the project Secret Selves, at the very prestigious Mass MoCA. Why not start at the top.

In an ongoing photo shoot Nimoy invited models, everyday people, to act out fantasies. By day, Clark Kent, mild mannered reporter, but popping into a phone booth (remember them?) he is transformed. Look, up in the sky, it’s a bird, it’s a plane, no it’s Superman.

One subject was transformed into an ersatz Nijinski as a fawn. A Rabbi appeared in leather. The video in the museum lobby showed a guy in his jockey shorts flailing away at a guitar like an ersatz rocker.

There is a benign sense of exhibitionism in this display of large scale photographs. Overall, the production values are superb. The prints are large, impeccable and impressively presented.

Like much celebrity generated work it is the best art that money can buy.

In this sense Nimoy is hardly unique. But he ain’t no Cindy Sherman.

Still I decided to mosey by and check it out.

Me and a mob of others.

On a gorgeous summer afternoon, when most folks head for the beach, the parking lot at MoCA was packed. And the one across the street. I lucked out as somebody was pulling out.

Seems it was also the annual Bang on the Can event which is a big draw.

Chatting with Tami Daniels of I Berkshires.com she parked at Big Y and walked down. There were other reporters milling about. One had his note pad out and was asking questions of visitors a number of whom were subjects of the images on display.

I talked with a family involved with the project. The father’s fantasy was to pose as a made guy from Brooklyn. His rather tall son with rasta dreds had put a bag over his head as an ersatz shark. They were all decked out in Nimoy’s T-shirts including Mom who was not in the picture.

Staff assured a lady waiting beside me that she would get a T-shirt and catalogue. She was a part of the project and was excited to see him again. There was discussion of her size. A small shopping bag with the goods was presented to her.

There was a pile of these bags set up on a table attended by a young lady with a cash box. An autographed catalogue, T-shirt, and shopping bag was on sale for a hundred bucks. The shirts were not for sale separately. That seemed steep for the package. I considered it but decided not. I have too many catalogues and T-shirts as it is.

A woman asked me if I was in one of the pictures. No I answered but excitedly she said that she was.

The event on the porch was scheduled from 4 to 6. It was for members only and those on Nimoy’s guest list. But it seemed that a mob just flooded in.

Between 4 and 5 nada. No Spock sighting although reports circulated that he was in orbit. Beam me down Scottie.

At some point you start to feel a bit foolish.

Like what the heck am I doing at a Star Trek convention with all the other groupies? Everyone had a camera and a pen at the ready.

We munched on chips and dips. I passed on the wine as we had theatre last night.

I chatted with friends including installer Richard Criddle. No, I did not take a picture of him with a drink in his hand. He was cleaned up. Not wearing his cap. He told me that it had been great to work with Nimoy who is a regular guy. I believe him.

It was getting late and I considered leaving. Had to get home, make dinner, and be off to Lenox. Time was getting tight.

Then he arrived. I got my shots.

There was a mob behind me waiting to interact.

Nimoy spotted a friend back in the lobby. He left the terrace.

After a moment I decided to follow and shoot with different light.

I got off a couple of shots and then a security guard pounced on me.

“No pictures and no autographs” he said in a cop like manner. Better to sell those hundred buck goody bags. How Hollywood.

“Oh really” I replied in an annoyed manner. Try to tell that to the horde of fans with their point and shoots.

Muttering “buzz off mate” I made my way out of the parking lot at warp speed.

The rest, as they say, is history.