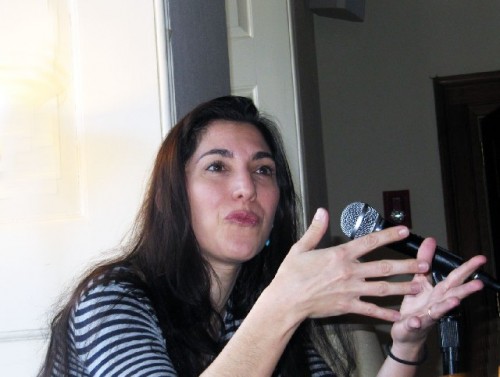 What if a family of Guys and Dolls-style gangsters moved to Downton Abbey-style London in order to escape certain, shall we say, entanglements? What if two of these wise guys fell hard for two tough dolls? And what if the formidable dame who runs the aforementioned criminal family developed an appetite for cucumber sandwiches? Director David Hyde Pierce gives us Oscar Wilde’s hilarious high society satire in a very new way. Welcome to the family.

Cathy Whitaker seems to be the picture-perfect wife and mother in 1957 suburban Connecticut.  But roiling beneath the surface, secret longings and forbidden desires cause her world to unravel – with incendiary consequences.  With a lush score that is both jazz-inflected and hauntingly lyrical, Far From Heaven is a powerful story of romance, betrayal, intolerance, and a woman grappling with her own identity in a society on the verge of great upheaval.

It looks to be a long life of sylvan contentment for 29-year-old Natalya, who is comfortably married with a young son.  One day, without warning, she falls under the influence of a force she has never known before: desire.  Suddenly, her simple, predictable world is irrevocably changed. Both romantic and psychologically compelling, this rare production of Turgenev’s masterful A Month in the Country honors the Festival’s tradition of celebrating great works of Russian drama with some of America’s greatest actors.  This revelatory new translation is the first collaboration between playwright Richard Nelson and Richard Pevear & Larissa Volokhonsky, the foremost contemporary translators of classic Russian literature (War and Peace, The Brothers Karamozov, and the best-selling Oprah’s Book Club selection, Anna Karenina).

Though only in her twenties, Lila Miller is stuck, while her mother, Grace, is perpetually in motion. When Lila returns home to her family's exquisite Hamptons house and garden with only a plastic bag and a broken heart, there's no nurturing to be found, except as pertains to horticulture. The same painful history that threatens to drive mother and daughter permanently apart ultimately evolves into the one realm where reconnection might be possible. The Blue Deep is an achingly honest and funny play about loss, growing up, and the benefits of aquaerobics.

Meet Barney Cashman. He’s a middle-aged restaurant manager who has a very nice married existence.  But he’s tired of existing; he wants to live - before it’s too late.  Maybe one afternoon of passion could be so exhilarating, so vivid, that the memory alone would sate his desire for more. Three women, three afternoons, three shots at living in Technicolor.  As she did with her lauded WTF production of A Funny Thing Happened on the Way to the Forum, director Jessica Stone reveals the humanity and the hilarity of this oft-overlooked early work of Neil Simon.

One-percenter Eden Higgenbotham lives a cushy Upper-East-Side life surrounded by equally affluent, vain, and snobbish friends.  When a sudden stroke causes her to contract the very rare Foreign Accent Syndrome, which makes her speak uncontrollably with a Jamaican accent, she’s forced to embrace a dramatically altered identity.  Irreverent and hilarious, WHADDABLOODCLOT!!! is a searing satire of race and class by the Olivier Award-winning writer of The Mountaintop, Katori Hall.

Celebrating its 25th anniversary with the return of Sherlock Holmes, the Free Theatre will present The Valley Of Fear, adapted by WTF veteran Steve Lawson from the novel by Sir Arthur Conan Doyle.  A Study in Scarlet, the first Sherlock Holmes saga, launched the Free Theatre in 1987, and now the legendary sleuth returns in this new theatrical version of Conan Doyle's final novel. Spectators will don their crime-solving caps and lend Holmes and Dr. Watson a hand, with gasps and laughs guaranteed for all.  Presented under the stars at Poker Flats Field.

Single tickets for the 2012 Williamstown Theatre Festival season will be available in April through the WTF website and by mail order using WTF's season brochure (call 413-597-3400 to join the mailing list).  The WTF Box Office will open on June 5th at which point tickets may be purchased online, by phone or in person at the '62 Center for Theatre and Dance Box Office at 1000 Main St (Route 2), Williamstown, MA 02167.