Falstaff at the Met 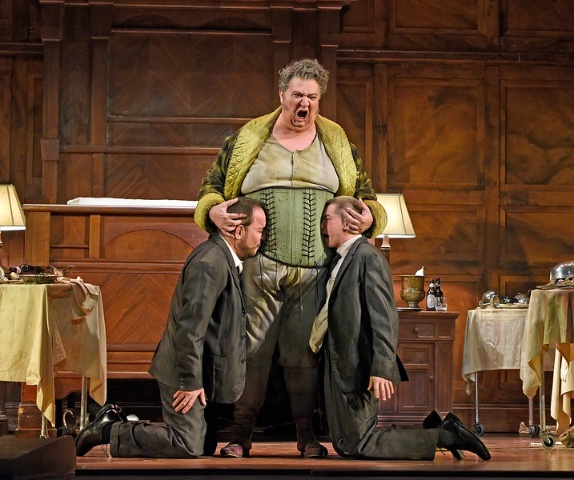 Verdi's Falstaff at the Metropolitan Opera

"It's not going to be my favorite Verdi opera." This, from an attendee on the 1 train riding away from Lincoln Center after the Metropolitan Opera's Wednesday night performance of Falstaff, efficiently sums up the attitude of audiences toward the composer's final opera--and his only successful attempt at writing comedy. Falstaff is a masterwork, but one held in high regard not for its considerable qualities but for its place as Verdi's last musical utterance. On Wednesday night under the baton of Robert Carnes, the opera received a performance that just might change that gentleman's opinion.

This is the Met's second revival of Robert Carsen's handsome production, which updates the action to Edwardian England and uses a mobile unit set to create the Garter Inn, Ford's house and the enchanted forest at the work's end. In this performance, its revival proved to be one of the great successes of the spring season. It centers around the return of towering baritone Ambrogio Maestri in the title role. Mr. Maestri is a fine comedian, a good singer and from the first bars, an overwhelming and gross figure who spends much of the show clad only in a set of questionable long underwear. He knows every phrase, accent and mannerism, from his opening cries for more wine to the final fugue that rings down the curtain.

It's not just the costumes, the mannerism and the singing. It's how Maestri puts all those elements together to create a portrait of boundless energy, unquenchable thirst and a love for life and the simple pleasures that makes Plump Jack a memorable figure. Also, great Falstaffs (and he is one) must have a tinge of melancholy laced through all the rolling belly laughs, and that quality is present too particularly in short moments like "Va, vecchio John." (This opera, unique to Verdi has almost no arias, with much of it in short arioso and parlando form, the better to serve the text of the play.)

Jack's efforts at bettering his finances and his love life were thwarted by a stellar supporting cast. Ailyn Perez sparkled as Alice Ford, object of his affections and ringleader of the conspiracy that brings him low. She was matched by Jennifer Johnson Cano as Meg Page (an underwritten part, this opera's only flaw) and Golda Schultz, a formidable talent who soared to enviable vocal heights as Alice's daughter Nanetta. Her Act I duettino with Fenton (Francesco Demuro) has one of Verdi's most memorable and haunting melodies, a challenge for the high soprano register that Schultz simply floated up into the air. Marie-Nicole Lemieux held down the bottom end as Mistress Quickly, here rendered as a comical figure out of a fifties sitcom.

The men of Windsor were well represented too. Juan-Jesús Rodriguez was a fiery Ford, comic in his disguise as "Mr. Brook" but also snarling with the passion of a Renato in his jealous rage. Keith Jameson and Richard Bernstein paired nimbly as Bardolfo and Pistola, who are either Falstaff's conspirators or his betrayers depending on who holds the purse-strings. Fenton is a low-class waiter at the Garter Inn in this production, but Demuro held his own with Ms. Schultz in their brief and high-flying duets.

Verdi wrote Falstaff as a coda to a career dwelling in Spanish tragedies and historical figures. It was his twenty-eighth opera, following the huge success of Otello. Falstaff was his third opera based on Shakespeare and also his third collaboration with librettist Arrigo Boito, a composer in his own right. Boito used most of The Merry Wives of Windsor for his plot, streamlining that play and incorporating bits of Falstaff's wisdom from the two Henry IV history plays where the fat knight first appeared.

As Wednesday's performance rocketed to its conclusion (a rendezvous in Windsor Forest where Old John gets pocked, prodded and picked, one felt that this opera has in its own way, a ritualistic quality. Not just for the pagen evocations of the setting (a moonlit grove, a sacrifice wearing antlers) but for Verdi lovers themselves. Its conclusion: a wedding, a wooing and a reconciliation is unique among all of his works in that it ends in merriment instead of tears and death. All the world may be a joke but this night it was Maestri who laughed last, crying "Viva Verdi!" ad lib as the curtain rang down on a glorious Falstaff.  (Reprinted by permission from Superconductor).