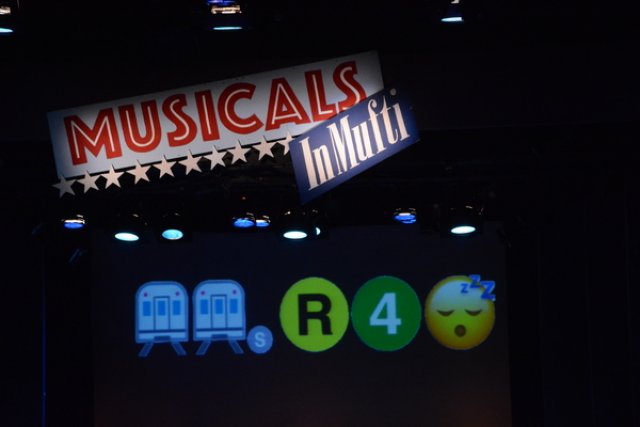 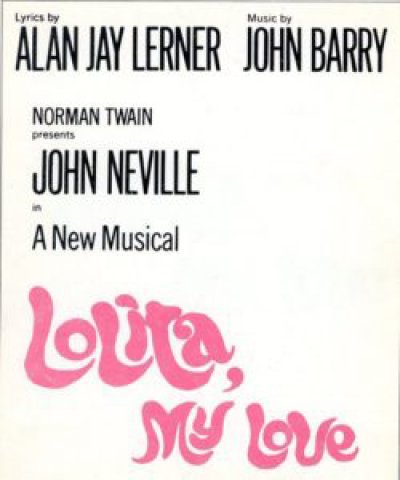 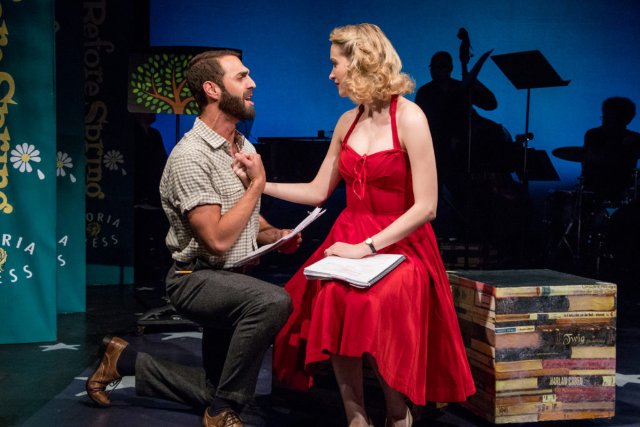 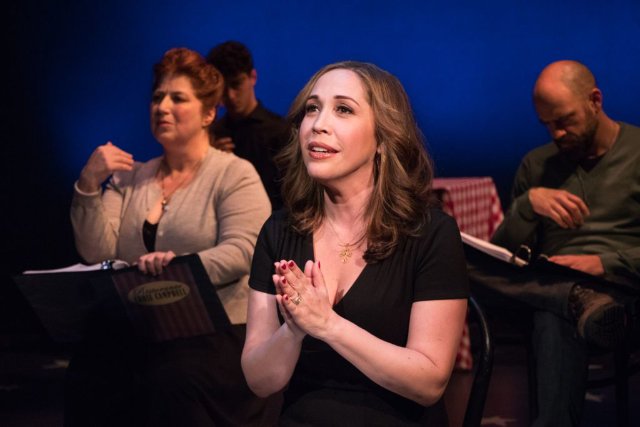 For 25 years, the York Theatre Company annually has done their “Musicals in Mufti” series featuring little know musicals, flops and those that closed out of town: Minimal sets/props/lighting, a small combo or just a piano, cast with script in hand and in their own clothes. Plus, the cast has just 30 hours to learn the show that most probably did not know existed before beginning rehearsals.

This year, focused on three musicals with book and lyrics by Alan Jay Lerner.

Carmelina is a musical that would be considered a “flop” – it ran less than 20 performances on Broadway in 1979.

Yet like many such shows, it has some charming moments. Thus it is deserving of the York Theatre’s production; actually, it is the third time in the series 25 years that the show has been done.

Carmelina is interesting also because long before Mama Mia! it used the same plot. That plot was also the basis for the earlier film, Buena Sera Mrs. Campbell that starred Gina Lollobridiga.

The setting is a small town in ; at the end of WWII, as the Americans liberated the town, a very young and alone Carmelina had brief relationships with three soldiers. When she realizes that she is pregnant, she truly doesn’t know which is the father, so she writes each and asks each to contribute to the baby’s care. They do. Seventeen years later, the regiment is returning for a reunion and Carmelina, now a respectable widow of the war hero Eddie Campbell, is terrified that the three men will learn the secret.

So complications ensue as the men do arrive, each meets the girl he considers “his” daughter and they all find out the truth. But there is a happy ending.

The original show was written by Lerner (lyrics and book), Joseph Stein (book) and (music). But this is a revised version.

After the show closed, Lerner was done with (though they had written On a Clear Day as well as the film Royal Wedding). So he gave permission to Lane and Stein to continue working on the show.  Barry Harman came on board to assist with the script and to write some additional lyrics, including some with Lerner.

So, this is NOT the show that opened on Broadway. Songs have been deleted, new songs added, new lyrics have been written for others, and a “frame” has been put around the show. It now opens with Vittorio Dela Marta, the local restaurant owner, welcoming us as tourists and setting the stage for telling the story of how the restaurant was named Eddie Campbell.

We then go back to 1961 when the reunion was about to occur.

Luckily the two of the best songs from the show were left alone: “One More Walk around the Garden” is the best of the best but “Someone in April” is also excellent. I’d really like to hear again the revised and new songs. I suspect there is a gem or two there.

The cast does an excellent job with both the plot (still a little clunky) and the music. Andréa Burns is excellent as Carmelina; her credits include In the Heights and On Your Feet. Joey Sorge has a great voice as Vittorio (who pines for Carmelina), but overdoes the Italian accent.  Antonio Cipriano, has a lovely voice and does a very good job as the daughter’s boyfriend. He also opens the show with “It’s Time for a Love Song” both singing it and playing the guitar. He is a very promising newcomer.

The three dads (Evan Harrington, Timothy John Smith and Jim Stanek) make the most of the song, “One More Walk…” as well as “The Image of Me.”

Carmelina will probably never get a Broadway revival because of its similarity to Mamma Mia! but it is well worth seeing.

“The Day Before Spring”

Alan Jay Lerner began collaborating with Frederick (Fritz) Loewe in 1942 with a musical staged in . The Day Before Spring was their second Broadway production (What’s Up which ran 60+ performances was the first). Spring ran a respectable 170+ performances but was not recorded and has seldom been heard since.

Yet there is delightful music and a plot that holds your interest. It involves a successful married couple in the late 1940s. The husband and his friend want to return to their small elite college for their 10th reunion. His wife doesn’t want to go, but is persuaded by the wife of the other man. Why is she reluctant? It seems that she almost eloped with a romantic fellow student (his car broke down); he has now written a best-selling book that is fictionalized account of their romance and what would have happened. She is feeling those “old feelings.”

You can guess what happens when they land at the reunion. It is somewhat predictable but Lerner and Loewe have added some unpredictable elements, such as the undergraduate who is “in love” with the husband.

Director and adaptor Marc Acito has made some changes. For one, he has moved the show from the late ‘40s to the late ‘50s. His reasons – that the show makes no mention of WWII which would have had impact on the characters – is valid but Arthur Miller’s Death of Salesman which is set in the same time makes no mention of either WWII (wouldn’t Biff and Happy been drafted) nor the Depression which is the period during the play’s flashbacks.  So while the change works, I’m not sure it was necessary.

Day Before Spring is a typical musical of the period; certainly it cannot compare with what the two produced later or what the best musicals of the period were doing. But it is enjoyable, and many of the Lerner & Loewe songs deserve to be heard more. The title tune is delightful as is “God’s Green World,” “A Jug of Wine,” and “I Love You This Morning.” This show deserves a recording.

Standouts in the cast include Madison Claire Parks as Katherine, the wife; Jesse Manocherian as Alex, the romantic author; Will Reynolds as Katherine’s husband; and Alyse Alan Louis as Christopher the young co-ed who does “My Love Is a Married Man.”

The most obscure of three shows is definitely Lolita, My Love. It had performances in Philadelphia (the announced five week run was cut short, so the creators could work on the show) and Boston (that run closed early also). The 1971 production never made it to .

Though Lerner continued to work on various drafts, the show sank quietly into the history books as one of the major flops of Broadway history. Yet a song or two survived.

Why did the show fail? First of all is the source material. Vladimir Nabokov’s novel Lolita was controversial when it was published; the movie was equally so and then Lerner and composer John Barry were attempting to make a musical out of a story of an older man who is attracted to a prepubescent girl. This was at time when the hit shows were You’re a Good Man, Charlie Brown; Jesus Christ, Superstar; No, No, Nanette; and Follies that was criticized as being “too dark.”

Also, how do you manage to translate Nabokov’s satire and humor?

After seeing this production, which was edited by Erik Haagensen from various versions, today it might find an audience, even in this day of #metoo and heightened awareness of sexual predators. The cynicism and satire could be more easily conveyed and understood.

Deniz Cordell reconstructed the score which contains some delightful numbers including “In the Broken Promise Land of Fifteen,” “Sur les Quais,” and “Farewell, Little Dram.”

Robert Sella is terrific as Humbert. He manages to project the ironic qualities of the character and bring out the elements that you can sympathize with. He makes him a vulnerable character which some may find inappropriate but which is part of the novel.  Caitlin Cohn is excellent as Lolita (she is in her early 20s but looks 15). This character is well aware of her effect on men and enjoys watching them try to manipulate her. Also excellent are George Abud as the other man after Lolita, Clare Quilty and Jessica Tyler Wright as Lolita’s scheming mother, Charlotte.

Cordell restored to the show a frame which Lerner had played with: Humbert is telling his story to a psychiatrist; he is in jail for killing Quilty. Thursday Ferrar as the psychiatrist may just be sitting on the side of the stage but her subtle expressions and gestures add a great deal to the show.

Lolita, My Love may not be ready for Broadway, but it certainly deserves more productions and a recording.