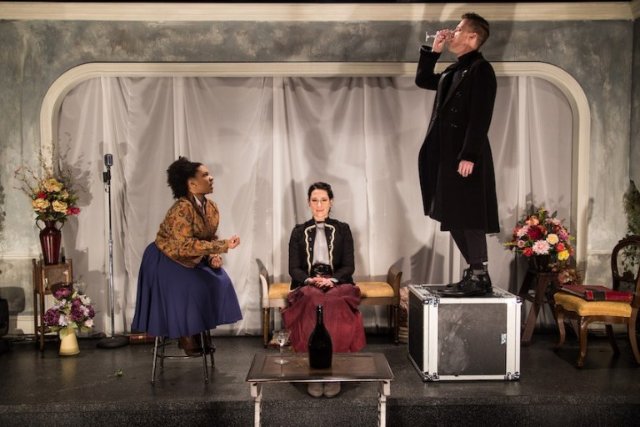 Hedda and Nora. The strong female characters in Henrik Ibsen’s two well-known plays—A Doll’s House (currently on stage at Raven Theatre) and Hedda Gabler—established him as a modern playwright of psychological realism. He famously wrote female characters that were more than decoration. Both Hedda and Nora are smart and headstrong—characteristics we can admire today.

The Tuta Theatre world premiere production of Hedda Gabler: A Play With Live Music is adapted and directed by Jacqueline Stone. The play is set in the early 1890s in Kristiania, now Oslo. The original modern and sometimes punklike music is composed by Wain Parham and played by a three-piece band, led by Parham on keys. The combination of the music, a stylized and somewhat stiff acting style, and some curious staging choices result in an expressionistic, not altogether successful, treatment of the 19th century classic story. It’s a production that will interest those who like to explore experimental theater. Don’t attend expecting a traditional treatment of Ibsen’s heroine.

Lauren Demerath as Hedda is an actor/singer who is able to handle the modernist songs (which she sings into a handheld mic) that accompany the classic text, as well as Hedda’s discontented, pouting persona. She’s reluctantly married to George Tesman (Huy Nguyen) and they’ve just returned from a long honeymoon. Their travel included a good deal of work and research time for George, who is pursuing an academic career and hoping for a promotion. They’re back in their home and Hedda isn’t happy with that either. She’s also not fond of George’s sweet Aunt Julie (Joan Merlo), who lives nearby and cares for her sister, who is in poor health. Hedda can barely manage to give Aunt Julie an awkward hug when they first greet each other.

As other men appear, we realize that Hedda lived a rather wild life before marriage. She has a flirtatious relationship with George’s friend, the lascivious Judge Brack (Tom Dacey Carr). There’s also her former lover, Eilert Lovborg (Kevin V. Smith), an academic who has published a successful book in George’s field. Now Eilert has written a sequel, which he believes will be his masterpiece. George fears Eilert’s work will gain him the academic position that George hopes for; George needs a salary suitable to support Hedda’s demands for decor and entertaining.

Hedda is jealous of Eilert’s collaboration on the book with Thea Elvsted, her old friend and schoolmate. (Aziza Macklin’s performance as Thea is the most natural of the cast.) Thea has left an unhappy rural marriage (a shadow of Nora’s act in Ibsen’s earlier play); she lives in town now and hopes to extend her collaboration with Eilert into marriage.

Ibsen’s MacGuffin is the handwritten manuscript for Eilert’s masterpiece, which he loses in a drunken stupor. (He’s a recovering alcoholic.) The manuscript is the point of contention, lies, tears, secrecy and destruction.

At the end, Hedda is focused on the beauty of a deliberate death. She says to Judge Brack, “It gives me a sense of freedom to know that a deed of deliberate courage is still possible in this world—a deed of spontaneous beauty.” Hedda Gabler ends with several deaths. (We know this will be the case because there’s a pistol in the first act. Thank you, Mr. Chekhov.)

For most of the play, the band, wearing white masks, is behind a white scrim. Eric Loughlin is on drums and Amy Gorelow, who also plays the maid Berta, is on guitar. In the dramatic ending, the musicians come to the front of the stage, still masked, and observe the final scene with Parham playing the eerie-sounding waterphone. The characters who died are also there, observing, wearing black and masked in white.

Scenic design by Martin Andrew is a traditional period design—Stone’s direction has characters frequently standing on chairs, tables and other furniture. Keith Parham sensitively lights the musicians behind the curtain, but his lighting is often simply very strong overhead lighting. Joe Court is sound designer. Rachel Sypniewski’s costumes go beyond the 19th century with shorter skirts and the white nightdress Hedda wears throughout the second act. By play’s end, George is in blue jeans and the Judge arrives in black topped with a black leather jacket. Before that, the men wear tailed frock coats and are dexterous at flipping up the tails when they sit down.

The world premiere of Hedda Gabler: A Play With Live Music by Tuta Theatre continues through March 29 at Strawdog Theatre, 1802 W. Berenice. Running time is 2.5 hours with one intermission. Tickets are $25-$40 for performances Thursday-Sunday. Free tickets are available for high school or college students through a donation by the Light a City Fund.