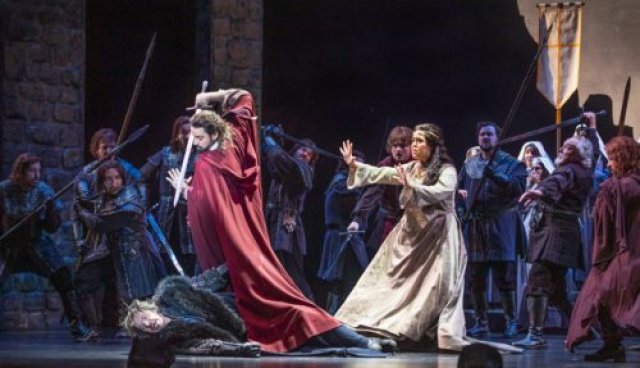 Firmly entrenched in the firmament of Verdi’s great middle period, Il Trovatore debuted in 1853 at the center of perhaps the greatest ever three opera sequence by a single composer – preceded by Rigoletto and prior to La Traviata. Critics often can’t resist nicking away at even the greatest, and some find structural flaws or character rigidity in Il Trovatore. True, the musical themes and tone may recur a bit often, but what music! The opera-going public has made it one of the most popular works of all time, owing to its powerful, driving music and its intense narrative. Opera San José’s production is simply superlative.

The opening storytelling of how the burning of a gypsy “witch” and the subsequent abduction of a Count’s son in retribution set their respective clans at war is relegated to a secondary character, Ferrando, a captain in the Count’s army, who is accompanied by the men’s chorus. But not only is this 10-minute piece delivered by bass Nathan Stark imposing, but it is merely the beginning of a highlight reel that runs from starting gate to finish line. Having seen over 300 live opera performances, I cannot remember one that has left me as breathless by intermission. The fireworks from the dark and lively music and the dramatic tension are relentless, and they are presented by OSJ with total authority.

Opera San José’s artistic and market position has been to support a stable of talented young artists and give them access to strong principal roles early in their careers. All of the leads in this performance exemplify that strategy. With strong presence and vocal power, Mackenzie Goucher portrays the title character Manrico, raised as a gypsy troubadour and not realizing that he is actually the abducted son of the now aged Count who had initiated the feud between nobles and gypsies. His singing of the role’s signature aria “Di quella pira” is commendable. Baritone Eugene Brancoveanu is a mainstay in the company’s current season, and here he plays the antagonist, the Count di Luna, with great relish. Rarely does a singer produce such rich, full sound with seeming ease.

The central plot line revolves around the conflict between Manrico and di Luna, who are unaware they are brothers. Their differences span politics, long simmering communal revenge, and the love of a woman. That woman is Leonora, a lady-in-waiting to the Princess of Aragon. I was disappointed to find that Kerriann Otaño, who was so brilliant as the mother and the witch in OSJ’s Hansel and Gretel, was ill and would not perform. But as is so often the case, the cover who awaits in the wings can really bring it as well. Such is the case with understudy Mary Evelyn Hangley. Verdi tests his soprano in this role. Along with the usual trills, runs, and leaps, the composer endows Leanora with great dynamic variation and an abundance of highly inflected vocalization. Hangley handles every challenge that Verdi throws at her, filling the house at the high end of her range yet caressing the delicate passages.

But what really distinguishes Il Trovatore is as gutsy and challenging a mezzo role as there is in the repertoire. The tragic and mournful gypsy Azucena has sought revenge ever since her mother was burned at the stake. It was she who kidnapped the Count’s son, and she who would name Manrico and raise him as her own. Daryl Freedman is Azucena, and I mean, she is Azucena – totally inhabiting the role. Her intensity is off the charts, and when she is on stage, her magnetism dominates the action. Her ability to swell and ebb, and to sustain the vocal volume she puts into the role with a low tessitura and frequent dives into chest voice is remarkable.

The great Enrico Caruso once noted that all you need to make Il Trovatore a success is to cast the four greatest singers in the world.  The four leads wouldn’t fill those shoes, but collectively, they are equal to the task of providing vocal excellence, along with fine acting.  Apart from the principals, conductor and chorus master Cristopher James Ray commands the baton with great skill, and the chorus acquits itself well, especially with the famous “Anvil chorus.” But stage director Brad Dalton and the creative designers deserve equal credit. Stephen Kemp gives versatility to his basic stage design by the use of a large, low-slung, mobile, exterior steps fixture that is repositioned according to the location of each scene. The set also acts as a fine receptacle for Elizabeth Poindexter’s colorful costumery and Michael Palumbo’s dramatic lighting. Together with Dalton’s management of the movement on stage, the production gives the effect of being larger than the physical space it occupies.

Although the production reveals a couple of minor glitches, the overall effect is so scintillating that the flaws are not worth discussing.  It is a remarkable production of a remarkable opera.

Il Trovatore with music by Giuseppe Verdi and lyrics by Salvadore Cammarone and Emanuele Bardare is produced by Opera San José and plays at the California Theatre, 345 South First Street, San Jose, CA through March 1, 2020.

Posted from For All Events,