From the Domestic Life of Strauss to Widmann's Streets of Babylon 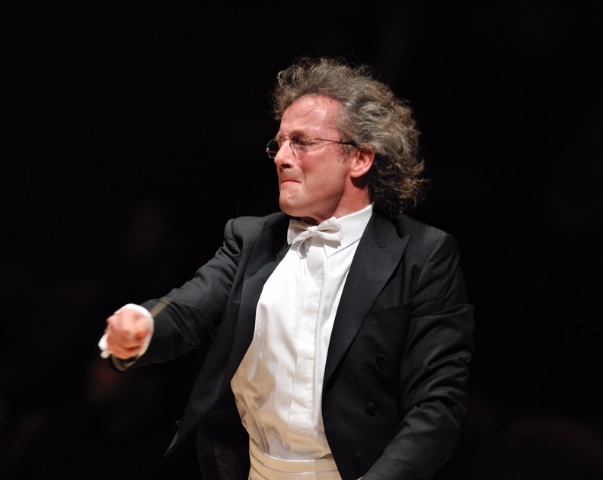 Welser Most leads the New York Philharmonic in Widmann and Strauss

Franz Welser-Möst leads what is arguably the best orchestra in the United States, the Cleveland. His mastery of Richard Strauss' music is well-known.  He began the New York Philharmonic program with the US premiere of Babylon Suite by Jörg Widmann, composer in residence at Carnegie Hall this year.

Widmann is a master at creating richly-textured sonic universes. His use of a wide range of brass and woodwind instruments extends to contra clarinet and alto flute.  Then he adds to the percussion section. A rig, a tambourine-like instrument with a goat skin stretched over the top and jingles attached.  The lion's head is a drum with a thread worked with rosin drawn through its head. When the thread is massaged, it moans. The water gong is struck and then immersed in water to give a glissando sound.  Button gongs have a raised center which is used to effect pitch.  And this is just the beginning.

Finger clocks and vocal interjections abound.  Never have so many percussion instruments been.assembled in one piece.

Widman dares worlds that are often harsh. Yet over and over in his work, the phrases which he stacks on each other, abuts and also weaves,  give a sense of lovely melody contrasting with riotous orchestration.

The big brass bonanza should perhaps have succeeded the Richard Strauss Symphonia that followed.  Widmann enlarges and magnifies Strauss.

Symphony programmers are apt to set new works first, assuming that they can attract an audience to a warhorse that follows. Members of the Philharmonic Orchestra report that in earlier performances of this program, the Hall was empty for the Widmann and filled up after intermission for the Strauss.  This is sad, because works like Widmann's can at the very least astonish a new listener. If Strauss extended the range of sounds admitted into music, Widmann extends them even further.  Remarkably, he still keeps tunes in evidence.  He has a terrific sense of humor in referencing not only Scarborough Fair, but many other familiar phrases. If he brings in a bewildering sound detritus, the work is of a whole, and often lovely.  Yet the spirit of confusion is not lost.

The opening sections introduce us to themes of the  composer, his wife Pauline and then the baby Franz.  We hear baby Franz's cries and the oohs and aah of his aunts and uncles.  The chimes tell us it is seven, and little Franz goes to sleep with a tender lullaby. We listen in an Adagio to suggestions of love-making between his parents, coming to a voluptuous climax.

The night is then full of dreams recalling themes we have heard. They are set in post-coital bliss.  This is interrupted only by the seven chimes. Baby Franz awakes and another day begins, chaotic and vivacious too.

The work offers Philharmonic instrumentalists a chance to show off and they do.  Welser-Most let loose an exuberant flourish of virtuosity.

The evening rocked David Geffen Hall.  The audience went with the flow.  It was exciting music-making.