For the Tree to Drop 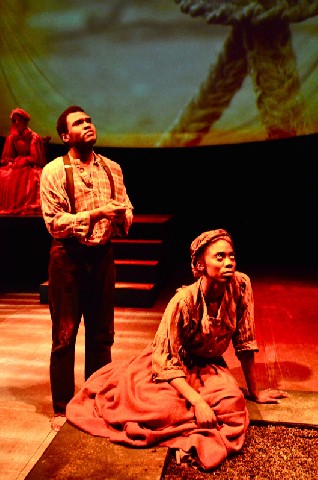 Henry (Justin Lonesome), a slave who has attempted to escape to freedom one too many times, is dead, hanged from a tree by Edgar (David Whalen), the plantation owner who claims him as his property. Henry’s sister, Estella (Siovhan Christensen), keeps vigil under that tree, doing what she can to provide his body dignity in death. Upon this Antigone-inspired premise, Lissa Brennan’s new play For the Tree to Drop builds an existentialist drama that explores the webs of power in which antebellum slaves (and their owners) were caught.
I use the word “existentialist” deliberately in that last sentence, for as much as the play explores the power dynamic between the slave owner and slave, and between the free and the unfree, my own attention while watching was most drawn by its scrutiny of the strange apparent lack of difference between life and death, for slave and slave owner alike.

This is most pointedly brought out in the two characters who are seemingly peripheral to the central conflict, Theenie (Linda Haston), a house slave, and Clarinda (Karen Baum), Edgar’s wife. Neither of these women is free to have a purpose; both merely bide time with meaningless, coerced occupation. They are, metaphorically at least, no more alive than Henry, an idea that’s driven home by his energetic presence on stage throughout the play. Meanwhile, Estella has her own awakening to the difference between what it is to be merely alive and what it is to live, as she discovers a real purpose for her labor in digging the grave that will (she hopes) be the final resting place for Henry’s corpse.

Brennan’s writing has a beautiful lyricism, and she makes use of vivid and precise imagery to evoke her characters’ strivings and yearnings. There is powerful poetry at work here, and the very fine actors do it justice. But even at a short sixty-five minutes, the play, with its repetitive structure, begins to feel taxing at the end. It’s a play in which not much happens – a woman digs a grave, others come to talk to her about what she is doing and why she is doing it – and at times it felt like we, too, were suspended.

Rich in its excavation of the moral nightmare of slavery as this play is, I don’t think Brennan takes full advantage of one of her story points: she uses Henry and Estella’s parentage as a secret to be revealed, but as an audience relatively well-versed in the sexual freedoms taken by slave-owning men in history (like, for example, Thomas Jefferson) we are way ahead of her, and the characters’ reluctance to reveal the secret comes off as a red herring.

It would be far more provocative if the play were to spill that information at the start and then add Edgar’s own existential dilemma into the mix. After all, a man who could treat his only living son with such utter disregard for the value of his existence must not really know the difference between merely having a life and truly living, either.

Director Alan Stanford has staged the play in the Cultural Trust’s downtown studio space; his pared-down production puts focus on the actors and the words, with vivid projections (by Jessi Sedon-Essad) and haunting sound (Steven Shapiro) that not only mirror and complement the poignancy of Brennan’s text but also elevate the production as a whole to a level of theatricality that feels very right for the play.

Reposted courtesy of Qendy Arons and The Pittsburgh Tattler.