I Love You You're Pefect Now Change 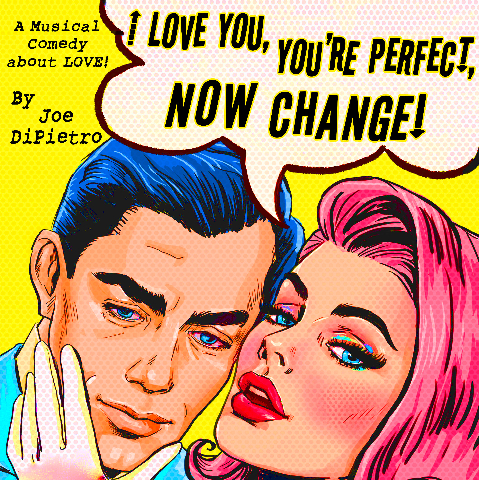 The cusp of winter is a good time to see a romantic musical comedy at the beautiful new Midtown Cabaret Theatre in Charleston. The comfortable seating arrangement made it easy to enjoy the show in comfort while chilling out with wine. Steve Duvall's delicious accompaniments were a bonus. Congratulations to Sheri Grace Wenger on this wonderful facility!

I Love Youm, You're Pefect, Now Change was originally an intimate Off Broadway musical revue about late 20th century romance. The first act showcases a Sex-In The-City style dating theme while the second act concentrates on the trials and tribulations of married life in suburbia. There are timeless qualities and topical universalities that hold true for today's audiences.

How different this show would be if there were scenes featuring internet and other social media advances. And how about the current trend of adult children moving back into their parent's homes.

Under the multi-talented director and choreographer Manny Houston, his four person cast was able to keep up the fast pace of the show without missing a beat. Hayden Haring, Leah Megli, Ryan Ahert and Daniel Brever provide a powerful, one-two punch to all 19 skits for a spot on your funny bone. Manny Houston and Sara Morrison ambitiously tickled the ivories of Jimmy Roberts' music and from the book and lyrics of Joe Di Pietro.

Just like out of a scene from popular movie The Wedding Crashers Ryan Ahert tried his hand at romancing Hayden Haring his amorous equal during a a wake scene of "Funerals are for Dating." Haring used every negative about possibly getting together with Ahert that she could think of while he perused her more and more until she eventually gave in.

Ahert and Haring again teamed up for a fast paced hilarious skit "Not Tonight, I'm Busy, Busy, Busy." They tap danced their way into a love relationship. It was just hilarious. We have all gone through this dance at one time or another. Must of us survived; until the next romantic challenge ensnared our sense and sensibility.

"The Lasagna Incident" featured Leah Megli and Daniel Brever in a skit showing how hard a woman works to try to make herself look good enough for some loving. It is a well known fact that you might be able to get a man  simnply through cooking skills. This proved to be the humorous focus of a romantic encounter.

Leah sings her solo "I am going to be loved tonight."

The well balanced ensemble piece "Company" provided several opportunities to get the audience laughing with appreciative applause. Outstanding scenes that hit home included "Whatever Happened To Baby Parents?" Ahert was over the top and in his prime with  the solo "The Baby Song."

Then there was "And Now the Parents" where all four performers took part in a skit that still holds true today.  Too often parents expect love to lead to marriage. Sometimes however it doesn't happen as parents expected. The age specific characters made the sketch believable and funny. Yet again the costumes were a major asset.

The perky music of Roberts helped make this romantic musical comedy work as it complimented the light-hearted comedy sketches. The simplicity of the set didn't get in the way of all the quick changing scenes as minimal props were added to the stage.

This is a delightful way to spend a sunny Sunday afternoon with an enjoyable theatrical diversion. It's fun to see ourselves mirtrored in various scenes as life lessons earned. Some of us manage to live happily ever after even if only in our dreams.

End of the Rainbow  by Peter Quilter, based on the last months of the life of Judy Garland, opens April 28 and runs through May 15. It will be produced as a part of the lively and diverse North Charleston Arts Festival.