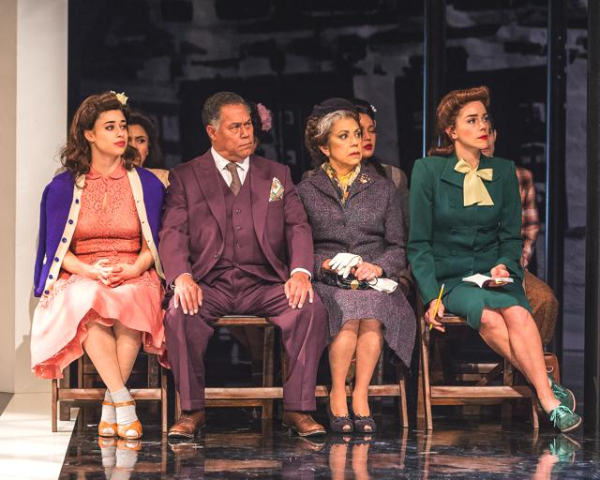 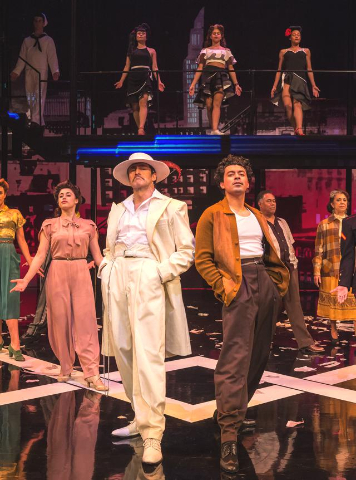 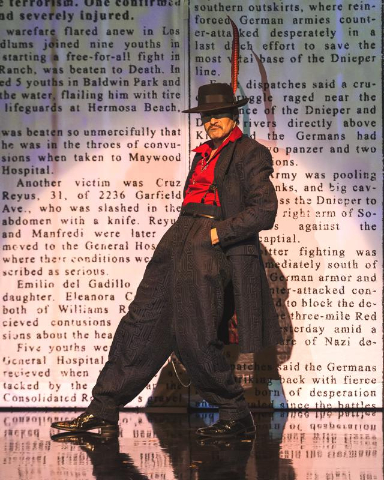 Seventy-five years ago a murder was committed in Los Angeles in an area known as the ‘Sleepy Lagoon reservoir’.  Four young Latino men were charged with the crime of murder, and the ensuing, highly controversial trial introduced a new word into the main-stream American lexicon – “Pachuco”.

In 1977, playwright/director Luis Valdez, brought his play “Zoot Suit” to Gordon Davidson, the Artistic Director of the Mark Taper Forum with the hope that one of the country’s most prestigious Regional Theatres would produce his controversial story of social injustice and police brutality toward Latino’s in the city of Angels.  And he wanted to do it with a cast of mostly Latino performers.

Not only did Davidson agree to produce the play, he helped guide it through development stages giving director Valdez full support and resources of the Mark Taper Forum. Davidson’s belief  and Valdez’s powerful play helped change the creative theatrical climate of Los Angeles.  Not only did it open the door of diversity in casting, it made edgier and non-traditional subject matter plays acceptable; solidifying the reputation of the Mark Taper Forum as a welcoming place for new work by America’s emerging playwrights.

The Taper’s revival musical production, now onstage of “Zoot Suit”, is faithful to Valdez’s original story. This production has had a little tweaking by playwright-director Valdez here and there.  I saw the original production in 1978, starring Edward James Olmos as the narrator/guide El Pachuco, It was an astonishing performance and production.  Actors Daniel Valdez who portrays Henrique Reyna and Rose Portillo who plays Delores Reyna in the 2017 production, were both in the original 1978 show. Daniel Valdez is also the Music Director for the 2017 production.

The power of Valdez’s story and the potent dialogue of the original show is still intact and still affecting. The stage is splashed in colorful costumes of Costume Designer Ann Closs-Farley, especially in her Pachuco costumes sported by Henry and El Pachuco right down to the long single feathers in their hats and their three foot long pocket chains. The cultural heat and moves of the barrio dancers under the direction choreographer Maria Torres heightens the excitement and energy of the entire production.

Even though the story is based on actual events, there are echoes of gang warfare moments from “West Side Story” and a taste of family warfare as in “Romeo and Juliet”.  Alas, it would appear this tired old world hasn’t learned very much from our forebears when it comes to tolerance and understanding.  As a theatrical piece, however, “Zoot Suit” still has the goods to move an audience emotionally and intellectually to appreciate our diversity by listening to our better angels; thanks to the skill of this outstanding cast of 25 solid, actors, led by a mesmerizing Demian Bischir, as El Pachuco, ‘a messenger’ who embodies both good and bad spirits.

Matias Ponce as Henry Reyna, delivers a potent performance of a cynical man when it comes to his view of society, and rightly so.  He is brutalized both by his culture in the barrios, and in the treatment of his brothers by the ‘gringos’ who control the power levers in his world.  While viewing the police vs. the pachuco scenes, I felt the obvious bias of the justice system could have been toned down a bit. We get it and seeing it through the lens of 40 years later, too much cruelty can be off-putting to some, regardless of its veracity. Many times, less can make a more powerful and convincing statement.

Henry’s one bright spot in life is his love for his girlfriend Della, appealingly played by Jeanine Mason.  When the rumble in the Sleepy Lagoon area goes sideways and a rival gang member is killed, Henry, and his three compadres are caught up and sacrificed on the expediency alter of political and police department agendas.  Then as now, instilling fear (in “Zoot Suit” it’s the ‘Pachuco’ gangs), is a useful tool and a necessary component in maintaining control by governments worldwide.

In the jail and courtroom sequences Brian Abraham as George Shearer and Tiffany Dupont as Alice Bloomfield, Henry’s attorneys respectively, display their frustration in fighting a system where one can easily compare barrio life to the old Jim Crow rules of down south before the Civil Rights movement became law.

This triumphant production has been taken to the hearts of 2017 audiences, as was the 1978 production.  It has been extended three times to accommodate the clamor for tickets.