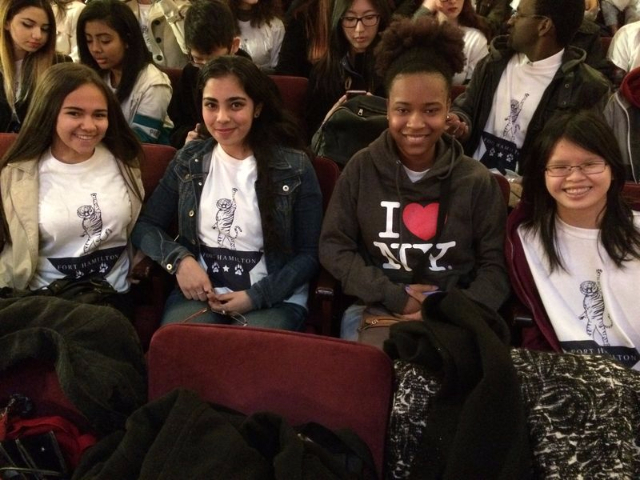 Audience at Rockefeller Matinees of Hamilton 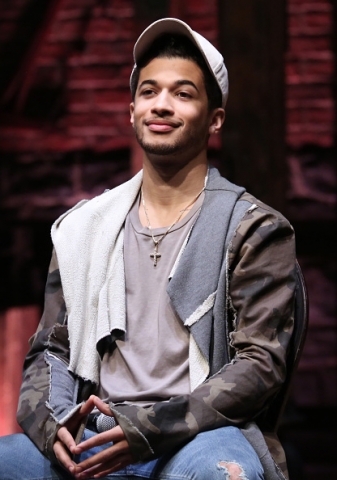 Enjoying the show as he puts his hands in Mrs. Merkel's leadership position, the diamond. 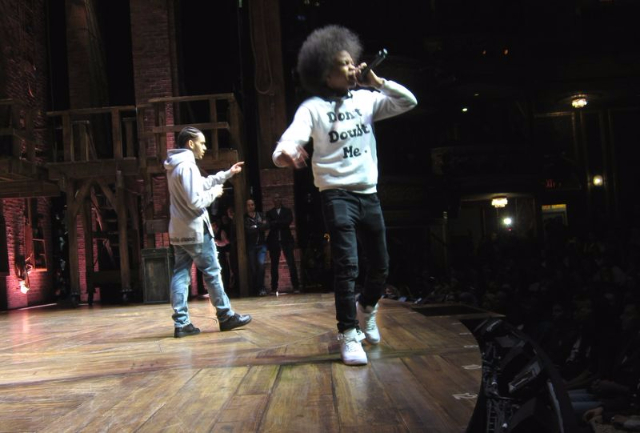 In the midst of a skit.

Rockefeller matinees of Hamilton might be better named "a day learning the value of work and getting your shot."

The event is beautifully organized.  Doors open for the students at 9:30 am and the teens quickly file into their seats. Employees of color on the staff of the Richard Rogers Theatre and police personnel making sure everyone is comfortable, puff up like peacocks as they look over an audience that is ninety percent of color and then onto the stage where actors are in the same percent.  At last, there's some special treatment from the world for people of color who have been in this country from the beginning. Immigrants.  Bastards.  You name it, we have it, here in the USA.

Skits by representatives from eleven schools, ten from the boroughs of New York and one from Newark, are first up on the stage.  The subject is revolutionary history, inspired by Hamilton.  We see and hear raps and poetry and high drama.  These skits have been chosen from hundreds of others.  Teachers are provided history documents by the Gilder Lehrman Institute for American History.

Almost a year ago, I had an emergency call from one of the students I teach in the New York City foster care program.  Could I please come in tomorrow and review a play she was writing about the Boston Tea Party.  I always say yes to my students.  I assumed the play was for history class, but all the preparation and excitement was for an upcoming trip to Hamilton, where the cast was going to watch the play, along with 1300 high school students.  In the big time, on Broadway.

At the matinee, emphasis in Q&A with the cast is on the importance of work and also on the fact that if you're born a bastard and immigrate to the US, as Alexander Hamilton did, you can still be the President's right hand man.   Hamilton wrote more than half the Federalist papers.   Senator James Webb of Virginia recently took on this role. Once his colleagues on both sides of the aisle realized that he could write "the law," they implored him to do their laws during his term.  Writing can help you to advance.  Another matinee lesson.

I grew up in a white world where dinner table conversation often focused on our progenitors in American history.  Thomas Jefferson wrote the Declaration of Independence in one of our family's homes.   George Washington declared the beer our family made in Philadelphia the nation's best.   I am most proud of Sarah Dickey who taught freed and runaway slaves long before the Civil War began.  She would found Lincoln University to educate them. Supreme Court Justice Thurgood Marshall and poet Langston Hughes are graduates.

Yet most of us descendants of the largely white 17th century European settlers have moved on with the times and welcome the wide palette of colors we find ourselves surrounded by today and the new nationalities represented by recent immigrants.

Lin-Manuel Miranda has used period costumes to remind us of our beginnings.   He has used color-blind casting to suggest the now-ness of the issues.  It is the choreography that makes this show so accessible.  The movers and gesturers, we can't really call them dancers, tell the story in jabbing arm movements, dipped knees, and sprawling bodies to make clear the struggle to bring together our nation.  It is unusual, clear and thrilling choreography by Andy Blankenbuehle, telling the revolutionary story in heart beats. It is mime as dance.

The teen audience loved King George III, although they may not have gotten the reference to the fact that his madness for a while was attributed to the fact that he was constipated.  They gasped as Hamilton cheated on his wife, and loved it when anyone stood up for their right to speak and be equal to anyone else.

At the end of the Q&A, a spoiler question was raised.  Why is Eliza, Hamilton's wife, the last character on stage.   She outlived her husband by decades and preserved his story for posterity.   One profound message from the show is that everyone has a story and telling it will help place them in history and make them part of the drama that is our country.

The Rockefeller Foundation with educational support from the Gilder Lehrman Institute is spreading Hamilton education across the country to Chicago, San Francisco and Los Angeles.  100,000 more young people will experience the show and its message.

If you've ever wondered why you couldn't find a ticket to Hamilton, here's the reason.  You'll never be sorry again now that you know who is going in your place.