To Kill a Mockingbird in Ft. Myers 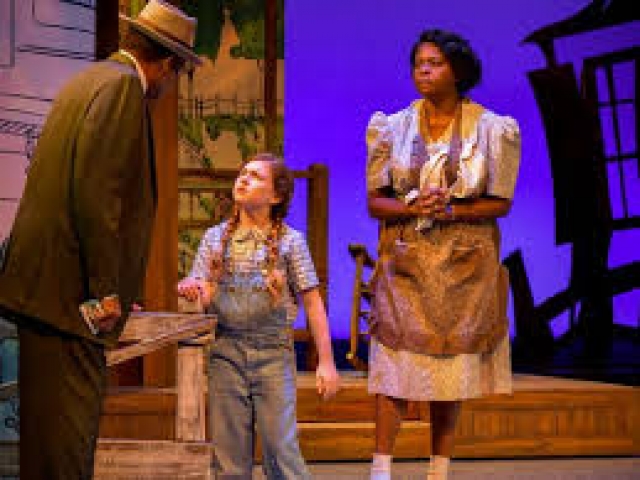 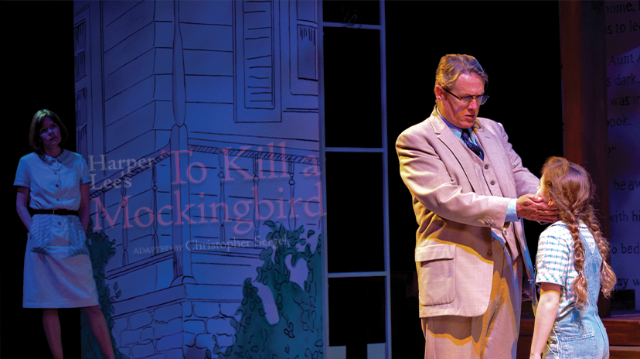 The program for Florida Repertory Theatre’s powerful production of “To Kill a Mockingbird” lists Maycomb, Ala., 1935 as the date and setting.

That is partially correct. Director Robert Cacioppo’s smart staging of the classic, based on Harper Lee’s 1960 Pulitzer-Prize-winning novel, takes place as much in 2017 in Anytown, USA as in 1935 Alabama.

This is particularly evident when southern lawyer Atticus Finch addresses us as though we are the jury in the rape trial of black defendant Tom Robinson (a heartbreakingly shaking, scared Kevin Craig West).

It's as though we're implicated when Judge Taylor grimly announces that Robinson’s
been found guilty of raping a white woman (a blubbering mess of an incoherent woman as brilliantly played by Sarah Katherine Zanotti).

We’re forced to examine our conscience and consider our prejudices as Finch’s 12- year-old son, Jem (Harvey E. Evans as an endearing, sensitive, innocent, loving and protective older brother) tells his father that Robinson’s conviction isn’t right. It isn't right because despite all evidence to the contrary, Robinson is found guilty. Basically, he's convicted of being black and at the wrong place during the wrong time. It's a situation eerily familiar to circumstances surroundings shootings of young black men during the recent past.

Today, racial tensions and prejudice haven’t reached the heights of the Jim Crow South. But the frightening possibility exists that it could (pre-curtain and intermission music, which includes Civil-War--era anthems “The Battle Cry of Freedom” and “Dixie,” one after the other as though they’re competing for attention, should be enough to make our blood run cold).

And so, such rational, peace-keeping individuals as Finch are welcome during these dark times of racial tension. Hearing the non-judgmental voices of children doesn’t hurt either.

It’s for these reasons, and countless others, that “To Kill a Mockingbird” belongs on stages now more than ever.

The Florida Repertory Theatre’s staging of Christopher Sergel’s adaptation of Lee’s novel is on stage through March 11 in FRT’s historic Arcade Theatre in Ft. Myers.

You can catch it before having to shell out big bucks for a Broadway production of a new adaptation by screenwriter, producer and playwright Aaron Sorkin, to open during the 2017-18 season.

Director Cacioppo’s efforts to emphasize the timeliness of the play doesn’t only include “casting” us as the jury which convicted Robinson. Performers enter and exit from the audience seating area -- in a sense linking the troubled Jim Crow attitudes of the past to the present.

FRT’s “Mockingbird” comes during a time when many long for the voice and presence of Barack Obama, amid suspicions of racial bias in the current administration. Finch, an iconic character in American literature, is also no doubt a welcome voice and presence.

Listen closely and you can hear some of Gregory Peck in V. Craig Heidenreich’s Finch. Peck played the respected attorney in the Academy-Award-nominated 1960s film adaptation.

Heidenreich, who looks older than Peck did in the film, largely makes the character his own. As was the case with Peck, Heidenreich imbues Finch with a patient, loving, reasoning and honorable aura without making the character seem saintly. This Finch’s humanity and vulnerability also shines through, especially toward the end.

But this Finch is more fiery in the courtroom than the character Peck brought to vivid life, earning him an Oscar.

Sergel faithfully adapted the novel without making his play a replica. In the beginning, the text is lifted from page to stage, as an adult Scout (called Jean Louise Finch, played with vivid recollection by Barbra Wengerd) begins to narrate.

Thankfully, Sergel, who nicely mixes action with narration, has retained the scene during which the children quell an attack by bigots outside Robinson’s jail cell. The scene’s a powerful reminder that children, in general, sometimes have a greater capacity than adults for compassion, empathy, rationality and sensitivity.

In the scene, Evans’ Jem is as unyielding and brave as Liza Jayne Longenhagen’s Scout is tender. She a finds the fighting mentality and never-ending curiosity within the character.

Curiously, the young performer wears her hair in pigtails, which seems out of character for a tomboyish girl.

There are other drawbacks. Spontaneity sometimes suffers; responses sometimes come too quickly, as though the actors are anticipating their lines.

In his effort to bring nuance to his character, which he often deftly does, Heidenreich sometimes speaks in such a low voice it’s hard to understand him.

Designer Richard Crowell's set consists of pieces that roll onto the stage, ensuring seamless transitions. The set is dominated by oversized boards containing words from Lee's novel. It's a storybook type of set, suggestive of a fairytale. The set works, though, because the story is told from the perspective of a child.

When Jean Louise is observing the action from an adult distance, lighting designer Jim Hunter dims the lights, making the colors non-realistic. That’s appropriate because this is a memory play; she’s addressing us years after the events of the narrative. The downside of dimming the lights is we cannot always clearly see Jean Louise’s facial reactions to her past.

That past is evoked through wistful music. Sure, Scout’s childhood was scary and disturbing, but it was also a time of compassion, humor and adventure – all of which come across in this mostly riveting production, set during not one, but two periods of racial tension and violence.