This Random World by Steven Dietz 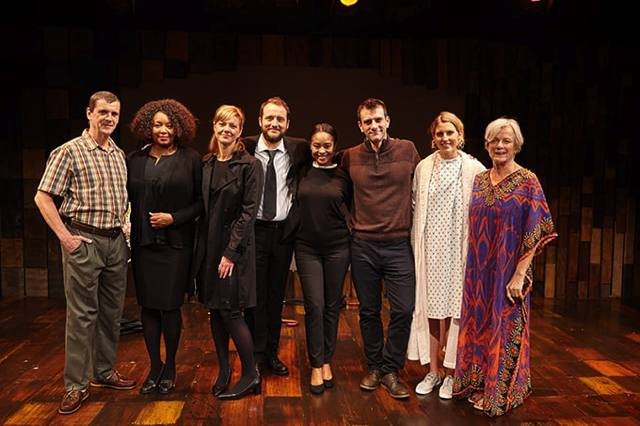 Beauty, it is often said, is in the eye of the beholder. Serendipity, however, is often just being in the right place at the right time. So there’s a definite correlation when it comes to the North Coast Repertory’s (NCRT) current heartwarming comedy production about truth, misinformation, and understanding.

“This Random World”, written by prolific playwright Steven Dietz, draws from the idiosyncrasies of ‘American Millennials’ and ‘Generation X’ -ers on how they process information, situations, and unexpected opportunities in our digital age.

Directed with an assured hand by NCRT’s artistic director, David Ellenstein, the cast of “This Random World” – most of whom have San Diego connections either educationally from USD/ Old Globe MFA programs or from other regional southern California theatres – are a cast of skilled ensemble veterans. Ellenstein, has a penchant for selecting interesting, bold and thought-provoking plays and playwrights to fill slots in his season line-ups at NCRT.

The story in short, follows, each character’s journey in this sometime biting, but always, insightful, intimate, non-linear comedy of serendipitous intersects and connections. Whether, it’s Scottie Ward an older, ailing lady (Ann Gee Byrd) who is making plans to take one last journey abroad with her paid travel companion Bernadette (Volanda Franklin), while her daughter Beth Ward (Lisel Gorell-Getz), who is unhappy in her present situation, flees to Nepal via a get-away trip as way of escaping her shallow domestic life,. There she meets Gary (Patrick Zeller), a fellow American also traveling in Nepal who briefly connect and then go their own separate ways.  Then there is her brother Tim Ward (Kevin Hafso Koppman), who carries his laptop everywhere he goes, who decides, as a joke, to post his own obituary on his website.  Not a very adult thing to do, however, digitally-saturated Gen-exers and millennials often do a lot of strange and unusual things when hunched over a keyboard.

Tim’s post sets in motion the thrust of this tale of misunderstood messages (a favorite ploy of many Shakespearean comedies as well) only to discover it’s not that easy to debunk a post on the internet. Once messages are launched, truth and understanding take on a life of their own.  When Claire (Diana Irvine), an ex-girlfriend of Tim’s learns about the post, she gets all sentimental over his “death” and tries contacting his family.   When Tim tries to tell everyone that was just a joke, no one believes him.  They think they’re dealing with a ghost or an imposter.  Yep, some of us live in the Hollywood-created reality zone of Zombie Apocalypse, the Walking Dead, and such.

When Tim actually confronts Rhonda (Ava Hill) the staff employee at the mortuary she thinks Tim is an apparition. After all she read his obituary on the internet.  Truth dies quickly on the internet but fake news thrives and spreads like the plague, even on our stages, silver screens and on TV.

Despite all of the implausibility of the plot, I remember the sage words of my grad school professor Charles Champlin, the Arts and Entertainment Editor of the Los Angeles Times, back in the 60’s who said, “if an audience accepts the original premise of the story, then they will buy the ‘bits’ that go along with overall narrative.”  He also cautioned, “I don’t want any of you to become verbal vaudevillian style writers either. Always respect the efforts of your fellow creative artists.  Be critical but fair.”  Words to live by for a critic.

The combination of a talented cast of pros, under the creative direction of David Ellenstein, delivers a first-rate evening of sharp comedy, punctuated with moments of poignancy, with which all audiences can relate. To really enjoy this production just let the skills of the actors work their on-stage magic while you review some of your own life’s serendipitous moments.  It’s cathartic.

“This Random World” performs at the North Coast Repertory Theatre, in Solana Beach, CA through March 18, 2018.