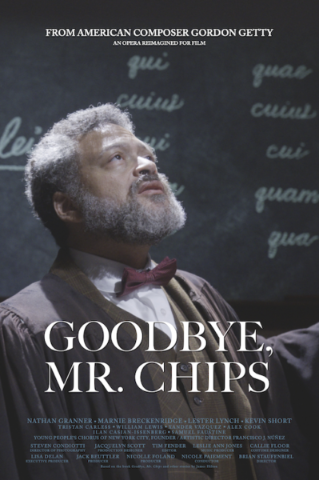 Gordon Getty's opera, Goodbye, Mr. Chips, had its New York premiere as an opera reimagined for film. Co-presented by New York City Opera (NYC) and Festival Napa Valley, Getty’s fourth opera is based on the popular 1934 novella Goodbye, Mr. Chips and other stories by James Hilton.

Nathan Granner, a tenor with a particularly clear and moving upper range, sings the title role.  Kudos to the make up staff who age him gracefully and believably from a 22-year-old novice beginning his career, until the last days of his life at age 85.  Suitably, his voice does not change over the years.  He is fixed in our minds in time and on film/stage too.

Indeed, one of the best things about Chips is that Getty has concentrated on telling his story, and hasn't let arias intrude. Yet Chips has some beautiful moments in song. Granner succeeds in creating a correct character who is reserved and charming at the same time.

The orchestration was recorded first. It is particularly rich and underscores the simpler lines sung as characters tell the story. The singers were also recorded separately and their voices were lip-synched, so cleverly that you would not notice if you did not know this.

In fact, some of of the strongest elements of the filmed opera come from the origins of the elements, each recorded in its.own right. When John Goberman first conceived Live from Lincoln Center and opera filmed live, the model was a football game. Low candlepower wattage could be overcome. Excitement would come from art created in the moment.

Opera has its limitations captured in the instant. The orchestra often is given short sound shrift to make sure voices ride over it. This is not a problem in Goodbye, Mr. Chips. The lush and enriched orchestra can be heard in its full glory. Not a voice is swamped. Nicole Paiement conducts to bring out scope and detail.

The director Brian Staufenbiel has responded to the challenge of transfer from live action to film by listening to the music and bringing its beat to the images. His translation adds a moving dimension to the work.

The set itself is fascinating.  The central room is Mr. Chips' last home, where he is telling the tale to Mr Merrivale. Lester Lynch a captivating narrator. Separate units are a school classroom and dining room, in which the composer does a charming cameo toward the end of the opera. There is an exterior in town, with a bridge that serves to connect elements. We pull back twice to view the entire stage with each of these interiors looking like dollhouses. A blackboard can decline adjectives in Latin and also become a night sky.  The windows of the schoolhouse are frames for many students.

It seems heavy-handed to remark that the casting is color-blind.  It suits the work and seems perfectly natural.

Goodbye, Mr. Chips captures the flavor of a time when schoolboys were taught Latin and Greek, which they couldn't use. They were also taught decency and other civilized virtues, which perhaps they could. Often, of course, they did just the  opposite.

Chips teaches in the very best of schools, a beautiful old institution, made up here in musical blocks of feeling and beauty. Chips is an engaging human being and has lived a useful and civilized life.

Hello Mr. Getty.  Give us more!