Expressionistic Dance at Emile Bustani Theatre in The Lebanon 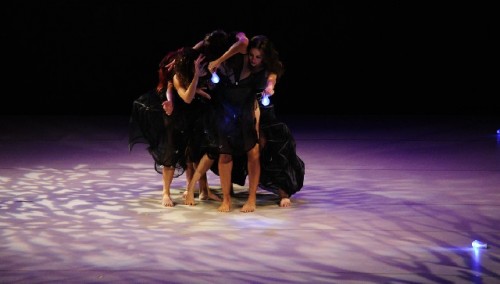 The ubiquitous world of art, dance and music is exceptional in its ability to create connections between continents and cities: Paris, London, the Bershires or Beirut. The artists of the Mazaltan, Mexico-based dance company are making their Lebanese debut at the Al-Bustan Festival — a distinctive winter event will delight the audience this week.  From its extensive repertoire, Delfos selected a kaleidoscopic program for the Emile Bustani Theatre titled “Luminous Passages” Pasajes luminosos.  The program primarily explores the ‘why’ of the universal themes.  One senses that the group exploits dance as playgrounds and catharsis for human relationships as well as instincts.

Founded in 1992, by Mexican choreographers Victor Manuel Ruiz and Claudia Lavista, the company has received critical acclaim in Mexico and abroad.  It has toured in the U.S., Europe and Latin America.  In 2004, with the support of the National Endowment for the Arts and in association with the National Dance Project of the New England Foundation for the Arts, the company performed at the Massachusetts Museum of Contemporary Art (Mass MoCA), the Joyce Theatre in New York City, the University of Arizona, Rhode Island College, Wesleyan University and Miami.  Delfos has also received numerous awards including the Mexican National Dance Award, the Best Dance Group in Mexico and the Artistic Merit Award.

Claudia Lavista depicts “Luminous Passages” Pasajes luminosos as “a collection of maps that describe the aesthetic location of the artist in relation to the journey he or she embarks upon to discover unknown islands or recognize inner-territories.”  On a stark minimalist stage with luminous moments of floor prisms or overhead colored track lighting, the spectacle unfolds its six dance pieces.  From the onset, “Nisi Dominus,” is set to Vivaldi’s choral music by Guggenheim laureate Omar Carrum.  It propels us into court intrigue from biblical times expressed with a contemporary dance interpretation of supple movements and ethereal rendition.

In Meredith Monk “Alone and my Soul” Solo y mi alma, Agustín Martínez exquisite Borges like meditative performance explores the human soul and its complexities.  It is articulated through body contortions and the meaning behind the concept of body shape with the ability to focus on each of its parts.  Hence, the body becomes an expression of art – the soul answer in secret is transformed into the outward appearance of a ruby bird.

With Mario Lavista “Lost territories” Territorios Perdido, based on an Octavio Paz poem, the three male dancers take us on a voyeuristic journey into the contemporary world of power.  Their staccato movements, whirling sweeping dances and struggle around a computer terminal, or a large attaché case possibly stacked with money land them in a mound of dust.  It is a dreamscape that switches between episodes of sensual impulsiveness, scenes of harrowing need or anxiety and aspects of melancholia.  But this dance is not entirely about displays of power.  When the dancers shoot a leg forward and extend an arm up, they break the fluid line by dropping a hand.  Here and elsewhere, such disjointedness is appealing, like a stringent physical thread reminiscent of Robert Longo’s paintings.  There is always a return to the order of a body, but at the last second renders it pliable and bendable so that these dancers always appear human thus themselves.

The second half of the program introduced contemporary music with Mario Lavista’s “Night Reflections” Reflejos de la Noche, a piece for string quartet, based on a poem by Xavier Villaurrutia.  The four dancers break apart to form smaller clusters.  In groups of two or three, they cross the stage in forceful sprints.  But while the formations are ever-shifting, the dancers’ shapes are strong: deep pliés in second position and straight-leg poses while standing in demi-point, with the arms held high.  Eloise Kazan’s costumes and the dancers’ clusters are evocative of the Mexican retablos in particular at the conclusion of the piece when they are encircled by a halo of light and brightness.

“Shipwrecked” Náufrago by Steve Reich propels us in the parallel universe of two people unaware that they mirror each other. The stage is enclosed with miniature boats expressing the dancers’ obsessive search for an outlet or light. Would they succeed in their exploration?

Delfos is constantly engaging the viewer, forcing him to feel something. Feeling, in fact, is paramount to the group’s work, and nowhere did it experiment with emotions more typically than in the choreographers’ penchant for repeating scenes and gestures.

The evening program attains its crescendo with Maurice Ravel’s Bolero that emphasizes dynamics in the choreography.  Lyrical flowing movement passages are contrasted with the dancers – matadors’ staccato-like sharp movements.  Striped costumes swirl, spin and shed past worries, qualms and uncertainties on an architectural fenced backdrop. While Delfos Danza Contemporánea physically explores the limitations and capabilities of the performance space, the dancers’ malleability and frantic search for freedom brought the audience to its feet.

We are indebted to Al-Bustan founder Mrs. Myrna Bustani acumen and foresight in introducing Delfos Danza Contemporánea to the Lebanese audience.  However, Claudia Lavista’s deepest desire is for her group to perform at the prestigious Jacob’s Pillow Dance Festival in the bucolic Berkshires.  Having previously appeared at Mass MoCA a short distance from the Pillow, one can hope that this choreographer’s dream become reality after transiting through Beirut.  And let us hope that The Lebanon of today will shimmer again on the world’s canvas of art and culture?

The Delfos Danza Contemporánea Group performs through Tuesday at the Al-Bustan Festival in Beit Méri, The Lebanon.