Two if by Sea in East Boston 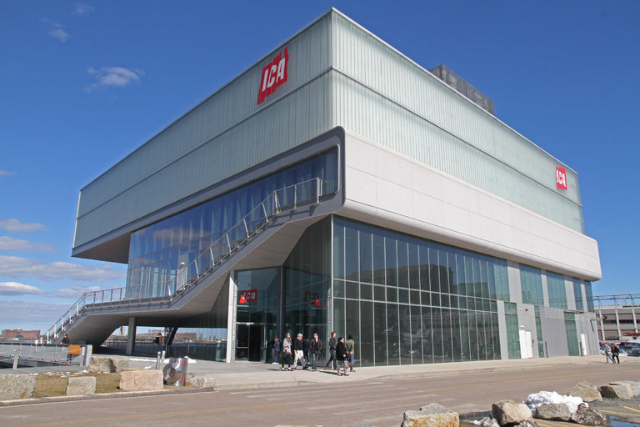 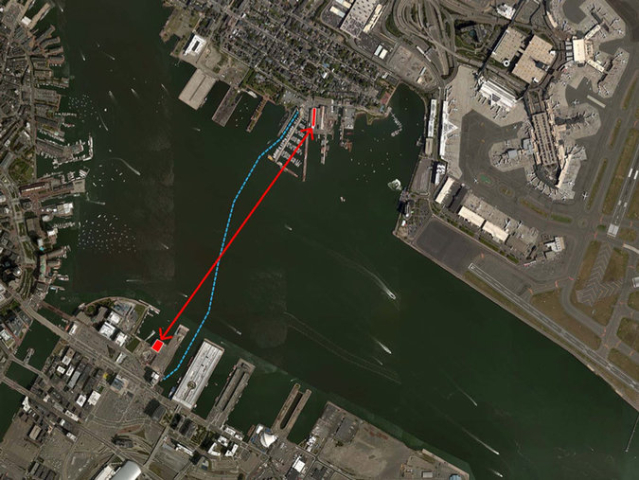 The red line is a straight shot between the ICA and its annex. The blue line indicates the planned ferry route.

After decades of stalled plans to establish a permanent home the Institute of Contemporary Art erected the award winning structure by Diller Scofido & Renfro on the then transitioning Boston harbor waterfront.

The immediate first impression of the 65,000 square foot structure was that its functional exhibition space, and ability to store the permanent collection which was launched at that time, was inadequate for future needs.

There is now a plan to lease an additional 15,000 square feet of raw industrial space.

While the building looked great, resulting in awards, much of the usable space was squandered by its dramatic design.

The footprint of the structure was entirely consumed with not an inch of expansion potential. The design also eliminated the possibility of vertical construction without extensive structural engineering and destruction of the original design concept.

For a time the ICA floated, but in 2015, abandoned the idea of creating a bridge to a floor of gallery space in an adjoining building then in construction. It was an imaginative idea that didn't pan out.

When the ICA director, Jill Medvedow, was fundraising for the project she was butting heads with Malcolm Rogers then raising a far greater sum for the renovation and expansion of the Museum of Fine Arts.

Even in a supportive cultural city like Boston there are only so many deep pockets.

Gambling by developing on the trendy waterfront and its artsy, jewel box design, Medvedow threw all of her eggs into one basket.

Her splashy approach, which has generated some 210,000 annual visitors, failed to consider the possibility of more bang for the buck by renovating warehouse and industrial space. Compare the ICA, for example, to the 17 acre MASS MoCA campus which is in the final phase of development. When MoCA was launched similar industrial space was available in Boston which is no longer the case.

The current number of annual visitors is in the range of ten times what it was on Boylston Street before the move to the waterfront.

Visits to the ICA are too often disappointing. With limited special exhibition space, divided with a slowly growing permanent collection, there isn't much to see. Mostly the ICA is a one trick pony with not particularly engaging or diverse programming.

Over the next five years, the term of its lease with a commitment of $10 million in renovation and programming, that might change.

It's encouraging to observe that Medvedow has come around in her thinking. This is, however, the kind of move that should have been done in the first place. Back then industrial scaled space in South Boston was more available and affordable.

In what proves to be an exciting and inspired move the ICA, during good weather months, will ferry visitors directly across the harbor to East Boston.

A condemned former copper pipe shop offering 15,000 square feet of exhibition space, an increase of some 50 percent, will be christened the "Watershed" opening in the summer of 2018.

That's the good news. There are, however, concerns for the long-term.

The ICA is negotiating a five-year lease with Boston Harbor Shipyard and Marina, which manages the site for its owner, the Massachusetts Port Authority. Medvedow hopes to renew the lease and has stated that “this is something that will continue for another decade at least.”

At the end of the lease, perhaps as soon as a decade, the renovated structure will have gained in market value.

Compared to other neighborhoods East Boston has been one of the last to undergo gentrification.

When we sold our three-decker on Jeffrey's Point, in 2006, we got four times what we paid for it. In the decade since property values and development have increased even more. While we lived there the lovely Piers Park and its community sailing program had been developed.

The ICA is planning to ferry its visitors but another option is to go by train from Park Street to Maverick Square. Take time to visit and enjoy some of  Boston's best and most affordable restaurants, taco stands and, of course, the landmark Santarpio's pizza.

The seasonal museum is free. From East Boston and its ferry ride the view of Boston is magnificent.

Hopefully the ICA will put a lock on the East Boston annex before the lease runs out.

If that happens, then what?