Written and Directed by Elizabeth Williamson 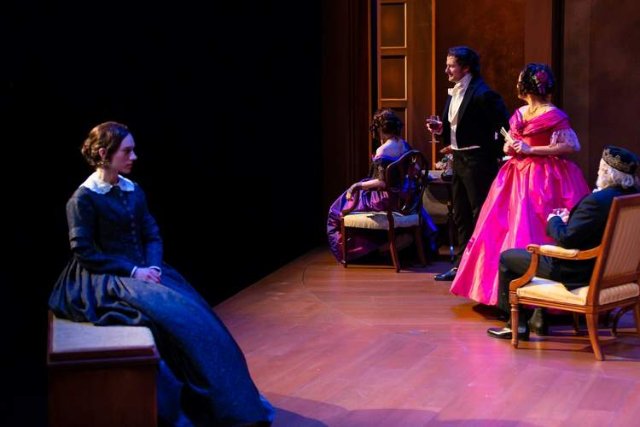 As a teenager reading Charlotte Brontë’s Jane Eyre, one was caught up in the story of the rags to riches (or at least prosperity) heroine and the seemingly doomed love story that finally ended happily.

She was  an extraordinary heroine for the mid-19th century: a determined, independent woman who would not accept what others viewed was her lot in life, but forged her own with her own principles and values.

In the stage adaptation written and directed by Elizabeth Williamson, now at Hartford Stage through Sunday, March 14, it is crystal clear.

It is easy to think of the novel as a typical Gothic romance or a type of Cinderella story, but in this case Cinderella strikes out on her own and achieves contentment before a happy ending, and her happy ending isn’t really a Prince Charming, but a flawed man.

For those who haven’t read the book or only vaguely recall it, Jane is left in the care of an uncle and his wife as a child. When the uncle dies, the wife sends her to a school that offered instruction and a hard life filled with rules and no love.

She graduates and teaches there until at 18 she decided “there must something more” and gains a position as a governess for a young French girl in a rather desolate manor house, Thornfield Hall. The owner, who is sporadically there, is comfortable financially, but certainly not of particular high rank. Mr. Rochester is pleased with how Jane is teaching the young girl, who may or may not be his child, but his manner is erratic and often abrupt. There is also a mystery about the house.

An attraction grows between the two, but it appears doomed when their wedding day is interrupted. Jane leaves and her fortunes somewhat change. But in the end love wins out. The first sentence of the last chapter opens with the famous quote “Reader, I married him.”

The book was written as if an autobiography by Jane, who speaks directly to us throughout as she recounts her story.

Williamson has kept that feature. The play opens with the adult Jane sitting at a desk writing her story. As she tells it, we see scenes from her childhood as she comments on them from her adult perspective. When the child trudges off to the school, our hearts break for her.

Throughout the play, we have Jane directly addressing us. Some might think that there is a tad too much telling rather than showing, but it helps the play move along. Williamson has chosen mostly correctly which parts of the novel to stage as scenes and which to let Jane tells us about.

She is helped by the fine performance by Helen Sadler, who manages to convey the independent spirit of Jane and seldom lets us wallow in pity for her plight. She is steadfast and caring; Sadler lets us see all of her emotions, even those Jane might have wanted hidden.

Chandler Williams is terrific as Mr. Rochester; he has the mark of sadness about him and his changeable manner lends mystery to him. Williams also has the brooding good looks that any self-respecting hero needs.

All of the other members of the cast play multiple roles—from the aunt who sends Jane away to the housekeeper who hires as a governess to the young woman Jane thinks Mr. Rochester is courting, and so on. Seldom are you aware that you are seeing the same person in two very different roles; each performer has captured the individual characters. Let's single out Meghan Platt, who portrays Jane as a child and later, her pupil Adéle.

As we expect at Hartford Stage, the production values are excellent. Nick Vaughan has created a set that hints at realism but uses moving panels that appear to be wood to set the various scenes. Ilona Somogyi has created costumes that mimic the period. Jane is mostly dressed in black. Add in the effective lighting by Isabella Byrd, sound by Matt Hubbs, and original music by Christian Frederickson and you will be totally caught up in the story and the production.

There have been other plays, mini-series, and musicals made of this story. The 1943 movie starred Orson Welles and Joan Fontaine.

This production allowed us to revisit a favorite novel and realize that it was much more than just a gothic romance.