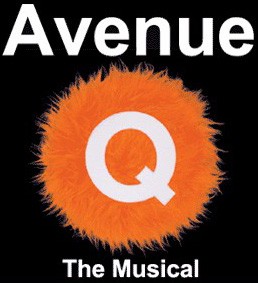 AVENUE Q is the hilarious and enormously popular Tony Award winning musical about a group of 20-something -- people and puppets alike -- who move to New York with big dreams and tiny bank accounts.

AVENUE Q has music and lyrics by Robert Lopez and Jeff Marx, book by Jeff Whitty, and is directed by Jason Moore. Based on an original concept by Robert Lopez and Jeff Marx, with puppets conceived and designed by Rick Lyon, AVENUE Q has musical supervision by Stephen Oremus, choreography by Ken Roberson, scenic design by Anna Louizos, costume design by Mirena Rada, lighting design by Howell Binkley, and sound design by Acme Sound Partners.

Winner of three 2004 Tony Awards for Best Musical, Best Score (Messrs. Lopez and Marx) and Best Book of a Musical (Mr. Whitty), AVENUE Q became an overnight sensation on Broadway in July 2003, having transferred to the John Golden Theatre from a wildly successful, extended and sold-out engagement Off-Broadway produced by Vineyard Theatre and The New Group.  At the show's final performance on Broadway in September 2009, the producers surprised and delighted the AVENUE Q cast and the audience with the news that AVENUE Q would resume performances in October 2009 at New World Stages.  The musical has continued to play to sold-out, enthusiastic audiences ever since.

AVENUE Q is produced at New World Stages, as it was on Broadway, by Kevin McCollum, Robyn Goodman, Jeffrey Seller, The Vineyard Theatre and The New Group.