A Florentine Tragedy and Gianni Schicchi 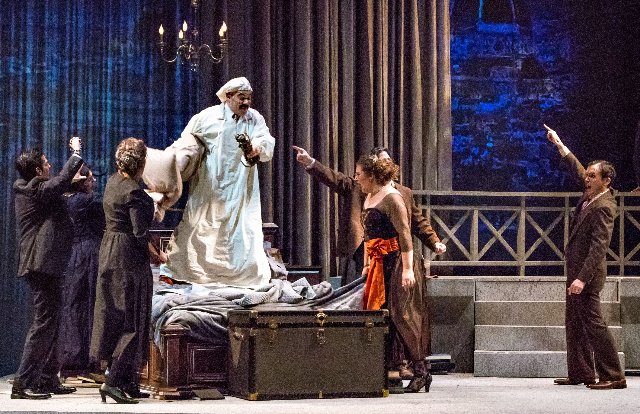 Conjoining two short operas into an evening’s fare challenges the most thoughtful producer. None equal the exemplary combination of Pagliacci and Cavalleria Rusticana, which match socio-geographically and in realismo tone. However, starting with Puccini’s Gianni Schicchi as one pillar, the evening offers what is widely regarded as simply the best one-act comic opera in the catalog. Rather than pair with one of that opera’s Il Trittico mates, Il Tabarro or Suor Angelica, Livermore Valley Opera has opted for Alexander Zemlinsky’s somewhat obscure A Florentine Tragedy. The outcome is felicitous, as both productions excel individually, and they fit well in unexpected ways. LVO has shown again that it produces consistently high quality opera.

Although the two operas debuted within a year of each other during World War I, the composers’ styles are quite different. Puccini’s is luxuriantly Italian with memorable melody and beautiful set pieces. Influenced by Wagner and Richard Strauss, Zemlinsky’s is through-composed and incorporates modern dissonance. However, the contrasts are not unwelcomed, as variety spices the program.

The operas were originally set in Florence during the Renaissance, but their plots are timeless, and director Layna Chianakas has aptly kept the location but updated the time of the operas to the period they were written. What’s more, because each plays in real time, Chianakas added the conceit that they occur within the same day. Because both pertain to domestic situations, the company gained scale economies by using a single set. Finally, the great expense of Gianni Schicchi, owing to 15 principal singing roles, is offset by A Florentine Tragedy which requires only three, and those three perform in both operas.

A Florentine Tragedy concerns a love triangle in which a plain, older man of modest income returns home to find his young wife entertaining a suspected paramour – but is this pleasure or business, as the husband sells material and displays samples at home? The interloper has every social advantage over the husband – youth, good looks, and he happens to be a prince. Although his position grants him advantages, the prince is playing on the husband’s home turf, and with his “property.” The cat-and-mouse proceedings between the men ultimately turn from civil to confrontational. But who is the cat, and who is the mouse, and which will prevail? The action is riveting and the outcome is never clear until curtain fall. As Simone, the cuckolded husband, Robert Mellon dominates the stage and offers a robust baritone voice, commanding Zemlinsky’s dramatic and well-designed score.

The backstory of the opera, based on an unfinished play by Oscar Wilde, adds another level of interest to the enjoyment. Zemlinsky had been jilted by Alma Schindler, who later married the more renowned composer, Gustav Mahler, which Zemlinsky resented. While Alma was married to Mahler, she engaged in an affair with famous architect, Walter Gropius. The parallel between real events and the opera story was not lost on Vienna society and Alma in particular!

To the English speaker, the very sound of Schicchi (skeekee) makes the opera funny before the first note. But what ensues after the bouncy opening theme music is a masterfully humorous story of greed, betrayal, and love. The will of the just-deceased Buoso Donati reveals that he is giving everything to the church, so the hysterical relatives call on the title character to develop a scheme to devise a replacement will, in which the relatives would divide the estate.

The evening belongs to Robert Mellon, who returns to the stage after intermission as Gianni Schicchi. In contrast to the grim demeanor he offers in his earlier role, Mellon shows comic chops and vocal versatility with the best of them as he executes his plan of deception. But the other major players shine as well. Anush Avetisyan, who was the wife in the tragedy, is now Schicchi’s daughter Lauretta. She has a greater opportunity to display her graceful soprano voice in the famous gem “O mio babbino caro,” which she delivers with beauty and emotion. Michael Day, who showed both the tender and powerful sides of his tenor voice as the prince, has greater sustained opportunity as Lauretta’s intended. He gives a commanding performance of Rinuccio’s aria and matches well in the lovely duet with Avetisyan, “Lauretta mia.”

.Rarely can movement add so much to an opera as with Gianni Schicchi, having a clutch of foolish characters expressing their anxiety about their potential loss of inheritance. Chianakas orchestrates an exquisite frenzy of flurry and flutter throughout as Buoso’s relatives flail about, huddle, scurry in single file, and drop to the floor at various times. The whole undertaking is truly amusing.

These two operas make for a highly entertaining evening. The only false note concerns the orchestra, which was skillful in the comedy on opening night. But especially in the overture and early parts of the tragedy, dissonant tracts sounded more out of tune and out of sync as if the orchestra hadn’t mastered Zemlinsky’s more challenging and unfriendly music. It also overpowered the singers at times.

A Florentine Tragedy, composed by Alexander Zemlinsky with libretto from Oscar Wilde, and Gianni Schicchi, composed by Giacomo Puccini with libretto by Giovacchino Forzano and based on Dante’s Divine Comedy, are produced by Livermore Valley Opera and play at Bankhead Theater, 2400 First St., Livermore, CA through March 15, 2020.