How a Mural Walked Through East LA 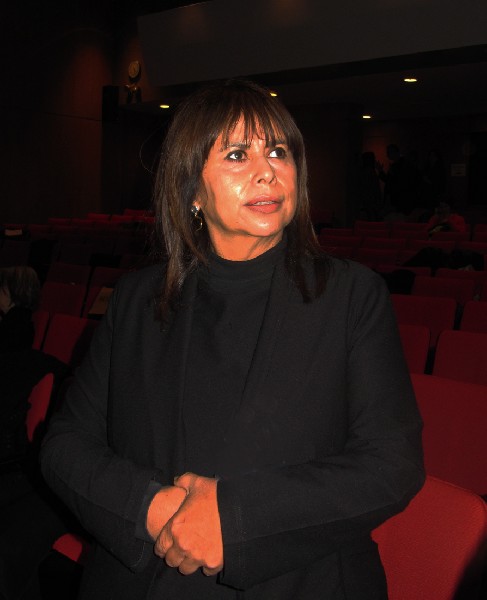 Patssi Valdez was still in high school when she joined Asco. 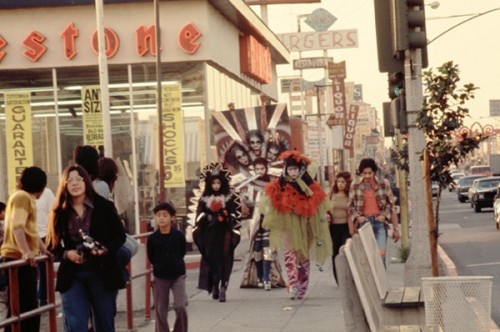 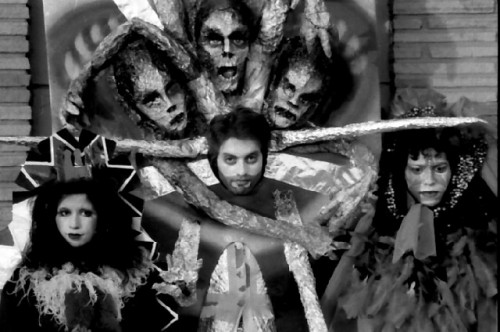 Patssi as The Virgin, Willie as a mural and Gronk as a Christmas tree. Gamboa photo. 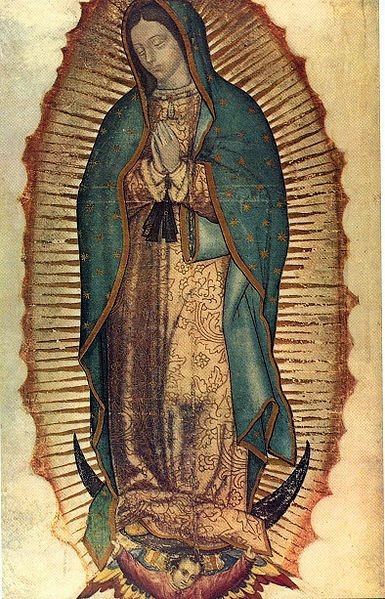 Patssi was inspired by traditional Chicano images of the Madonna. 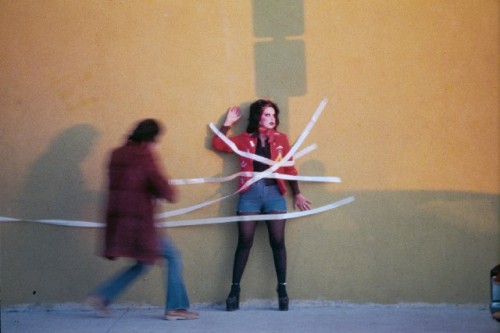 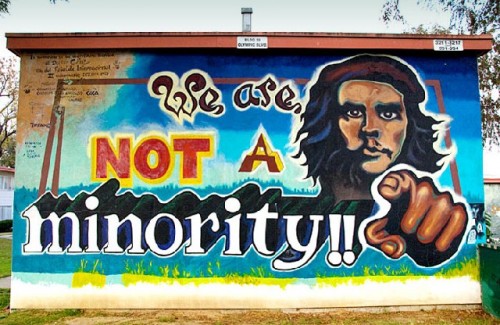 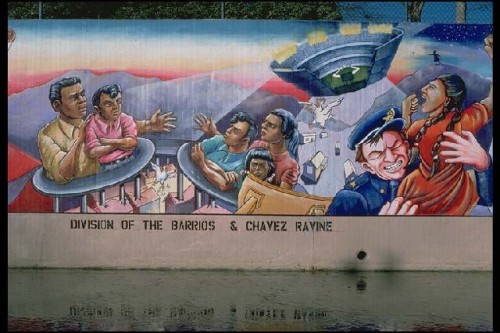 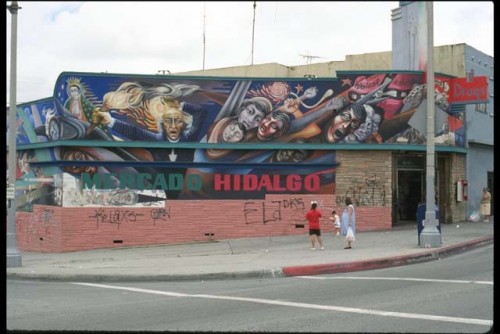 Charles Giuliano You have described the racism and police harassment in East LA. What was that about?

Patssi Valdez You’re Mexican. They don’t like you. They want you to go back to where you came from.

PV Doesn’t matter. I’m still brown. It’s the color of your skin. What do you think? I’m going to stand there and say “I’m second generation.” They don’t care. I’m still Mexican. There was a lot of hatred and racism.

CG In what sense were you bothering them? (LAPD)

PV Being alive. In their country. Just breathing the same air.

CG To what extent were they responding to the gang culture of East LA?

PV Well. I’m going to say this. I could be wrong. But I lived there. That’s a bit exaggerated. In my neighborhood we had a nice little home. There were no gangs around there. I think there were pockets of it. But it was a very nice neighborhood where I lived. I never lived in a gang infested area. I never did. When I went to high school there were some neighborhoods which were more gang infested than others. Where Willie grew up in City Terrace there was that gang Geraghty Loma and when I visited him I thought how scary. That wasn’t in my neighborhood. A lot of violence happened in the projects where people were a lot poorer.

CG When Asco was making work what was the response?

PV I’m going to talk about The Walking Mural.

CG That was the performance piece when Gronk was a Christmas tree, Willie was a mural, and you were the Madonna.

CG Gronk showed up as a Christmas tree.

PV Yes. Flouncing down the driveway. I got up. I wasn’t feeling well. But the minute I saw that Christmas tree, well, I gottah get up. It was hilarious. I had to protect myself from the cops or maybe some weirdo. So I got some body guards on my side. I had a cousin who was married to this huge guy. I said do you think he could come and sortah walk on the side of me. If anything were to happen. They said sure. So you’ll see them in some of the photos. I knew that I would not make eye contact. Would not look at anyone. I would not interact. I played the role. I’m a walking piece of art. I’m a float. I’m performing. I’m not interacting with anyone. So I looked straight ahead and played my role. I was a glittered Virgin. Of course, if you’re doing that you know it can cause some problems. You’re wearing black glitter. You had a slit all the way up your side. You’re wearing platform shoes. It could cause some trouble.

PV Exactly. Fun and scary all in one. Of course the police are circling us as we are walking. I think there’s a film out there somewhere. I’ve seen a piece of film. You see the police presence. You have to be more afraid of the police than anyone else. They could come and beat the you know what out of you. With those clubs. Which they did a lot.

CG It was risky to do that work. Dangerous.

PV I know. Very. Who cares. We had things to say. We had to say them in a big way or you wouldn’t get noticed. Your voice would never get heard. So we had to be larger than life. I had a certain mind set when we would do these pieces. When we had dinner on the divider (on Whittier Boulevard First Supper (After a Major Riot) 1974). Each of us was responsible individually. Nobody said you do this and you do that. Gronk do this. Willie (Herron) got his and I got mine. Then Harry had that old VW. We got all our props and found a location and set up. Basically we did it for the camera. A lot of it was for the camera. We would set up, pose and then Harry (Gamboa) would document it for us. The theory was, like with Walking Mural, that we didn’t have to wait for an audience. We didn’t have to sell tickets. In our neighborhood we were dealing with a built in audience. So we took advantage of that.

CG Did you let anyone know in advance?

PV I didn’t. I don’t know about the others. I don’t think anyone told anyone anything. We knew there would be all these shoppers. We knew there would be an audience. Except for our art exhibits. Then we would do a mass mailing. This was funny. In the neighborhood we would say “We’re having a party.” Come to the party and then we would bombard you with our art. We just said party and we would have music and whatever. Our following grew and grew. For our parties. Then you had to look at our art. That’s how we started building an audience.

CG  What about the media? Did you ever get any reviews?

PV Yes there was media that I vaguely remember. I was only 18 so that’s why they say my voice was never heard. Here I am growing up while I’m producing this work. Trying to figure things out as I was producing the work. I remember not wanting to talk to the media. I would shy away from it. I was still figuring things out. I was really young.

CG You were also a chica in a macho world.

CG What was your interaction with feminism? Were you aware of that issue?

CG Are the feminists interested in you as an historical figure?

PV There was a lot of controversy. Amalia (Mesa-Bains) says I finally get it now. Because I allowed myself to be tied up. To be taped up (Instant Mural, 1974). I allowed these things and the feminists were outraged over it. And the way I wore makeup. High heels. I was not liked I don’t think. I couldn’t explain to them why I was doing it. I tried. But they don’t want to listen. I felt bound and gagged over things that had happened to me in my youth. Personally.

CG Bound and gagged by whom?

PV I grew up with abuse. I don’t want to get into the details. It was like I couldn’t speak. I was afraid. You know it’s just hard to speak. So I was acting out these feelings.

CG You were rejected by the feminists who didn’t understand what you were doing.

PV Yes but I didn’t give that a lot of attention. I had bigger things to worry about. My personal life. The way I grew up. The alcoholism (of her father). The things that happened at home. The things that happened at school. Being poor. Wanting to go to college. The police brutality. Being a Mexican. Being called a beaner. Being spit at. Layers and layers of garbage.

CG A beaner? What’s a beaner?

CG For what reason?

PV You tell me. Just for being alive. I was walking.

CG So your street events must have caused outrage.

CG When you did actions like The Walking Mural how did people react?

PV I would hear sighs. I’m playing The Virgin. I’m playing a saint. A glitter/ glam saint. So you would hear women gasping like ‘oooooh.’ Under their breath they would say ‘dear God what is this?’ A bit of horror, a bit of shock. Curiosity. It was a whole mixture of things. Some young people wanted to be part of it. I heard that somebody was riding on the bus and saw us. They saw The Walking Mural and actually got off the bus. Just so they could come and be near the performance. So there were a whole bunch of mixed emotions going on.

CG How long would that event last? Do you have any idea?

PV Well we walked quite a few blocks. What. Ten blocks? I never counted the city blocks. Forty five minutes to an hour maybe. I never timed it. You would have to go and walk the blocks and figure it out. We walked slow.

CG Did you get a big crowd?

PV You need to understand the location. It was always crowded. That’s why we did it there. That shopping area which I told you was the hip area with the nice stores. There were always people there. This moment we could go there and there would be people walking up and down the street.

CG When you say Walking Mural what does that mean? What is it a comment about?

PV Well the muralism in the neighborhood as I commented on during the (Williams) panel. If you drive around as I said they’re politically correct. A lot of people were not trained or the work was really bad. So we decided to make a mural which wasn’t attached to the wall. It was free standing and it was moving. We could make a comment and not leave an eyesore on a city wall.

CG In what sense was that a mural?

PV Well we were the work of art that came off the wall. It’s like when you paint a picture on a wall but we painted ourselves. We physically became the art. Then we moved through the streets.

CG What did you know about dada and performance art? Were you aware that this kind of art was going on?

PV Personally at 18 I didn’t know any of that.

CG How about the others?

PV Gronk might have known but I don’t really know. To be perfectly honest this art making I don’t think was so much about making art. How can I say it properly? It was about commentary. It was about social things we were dealing with. For me also personal issues I was dealing with. I made art out of it. But I wasn’t looking at art books and things like that.

CG You were also making collages and graphics, illustrations for a magazine, drawings. So there was a lot that you were doing that would be described as art.

PV Yes but I wasn’t looking at art outside myself. Or outside my community for references. In high school I majored in art. I was trained. So I knew how to draw. I could draw the human body. I knew how to paint. I learned that in high school. In junior high and some in elementary school.