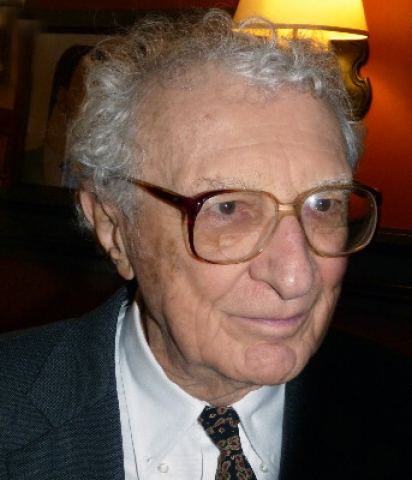 Sheldon Harnick’s mind was stuck on a lyric, but his body was on the move. He walks or finds other ways to get moving to free his creative process when he’s suffering a case of writer’s block.

A truck was also in motion. It was headed toward the award-winning, legendary lyricist of such musicals as "Fiddler on the Roof," "She Loves Me" and "Fiorello!"

Six inches separated the truck from Harnick, who was not struck by the vehicle.

“All I could think of to say was ‘It’s OK, I got the lyric,’” the 92-year-old Harnick clearly recalled.

The truck driver was “cussing” at Harnick and it’s not clear whether the motorist even knew to whom he was directing the foul language.

That was one anecdote Harnick related to a large South Florida crowd attending an address by the famed lyricist. It was one in a series of talks Palm Beach Dramaworks is holding as part of its Dramalogue: Talking Theatre! series. It complements the theater company’s season by exposing audiences to notable theater professionals and their processes.

During Harnick’s roughly 90-minute address, during which he spoke eloquently and with a sense of humor, he vividly recalled anecdotes from his storied career as though they happened yesterday. You’d never guess the man with receding gray hair and glasses will celebrate his 93rd birthday at the end of April.

Before he began talking, he walked like someone decades younger onto the stage to a round of applause. No slowness in his steps was apparent as he emerged from off stage and sat in a chair, next to event moderator Sheryl Flatow, a veteran arts journalist.

Harnick said he decided to become a lyricist after American performer Charlotte Rae lent him a copy of the original cast album of "Finian’s Rainbow," a 1947 musical satire on political corruption, greed and bigotry set in America with a distinct Irish flavor.

Harnick, who previously thought he’d become a violinst, said, “It was suddenly that’s what I want(ed) to do; I wanted to be a lyricist, not a violinist.”

Harnick met lyricist and book co-writer E.Y. Harburg, who praised his writing and urged him to continue. Harburg, who became one of Harnick’s idols and also wrote the lyrics to the film version of "The Wizard of Oz" gave the latter pointers on lyric writing.

“We clicked immediately,” Harnick said about him and Bock.

Harnick recalled having to play songs for the widow of La Guardia, whose last name is the namesake of one of several New York- area airports.

During Flatow’s interview with Harnick in front of the audience, a theater staff member played video clips from several musicals he worked on with Bock. Flatow and Harnick didn’t watch the video clips; their backs faced the video screen. Harnick turned his head to the right with his hands clasped during at least one of the clips. His expression betrayed one of amusing familiarity.

One of the songs in "Fiorello!" is “Politics and Poker.” Harnick played poker while in the Army. Harnick said his inspiration for another song, “Little Tin Box" was the many politicians at the time under investigation in a municipal corruption scandal in New York City. One of the politicians in the musical is questioned about things he owned that he couldn’t have bought on his salary.

“The money came from a little tin box my wife kept on the kitchen shelf,” the man claimed.

Fiorello! may have won the Pulitzer Prize, but Harnick said he and Bock liked "She Loves Me" (1963) and "Fiddler on the Roof" (1964) best among their musicals.

“The whole experience was a joy,” Harnick said.

"She Loves Me" opened during a time when “big, splashy musicals” graced Broadway stages, Harnick said. "She Loves Me" was a more intimate musical. Harnick recalled one review dubbed the musical “The Quiet One.”

It’s an adaptation of the play "Parfumerie" by Hungarian playwright Miklos Laszlo. The story centers around Budapest perfume shop employees Georg Nowack and Amalia Balash. Although they’re always on bad terms at work, they’re unaware that each is the other’s secret pen pal through lonely-heart ads.

The musical closed after a month and the show lost its entire investment. Harnick recalled cast members writing him a letter saying they were clueless as to why the show didn’t work on Broadway; audiences seemed to love it.

It’s certainly safe to say that audiences and critics loved “Fiddler on the Roof.”

The musical, whose recent revival opened in December 2015 and closed about a year later, was nominated for the 1964 Tony Award for Best Musical. “Fiddler” also enjoyed the distinction of being the longest running musical on Broadway at one point. The recent mounting was nominated for Best Revival of a Musical, among other accolades. It lost out to “The Color Purple,” which captured Best Revival honors.

Before “Fiddler” originally opened on Broadway in 1964, potential backers were skeptical; the show was too dark, they thought, according to Harnick. But Harnick and Co. stressed to them that the show would feature a “great clown” in Zero Mostel’s portrayal of Tevye.

Harnick said the idea for “Fiddler” began when a friend sent him a novel titled “Wandering Stars,” about a travelling Yiddish theater group in Eastern Europe.

Harnick loved it and asked Joe Stein, who would go on to write the book of “Fiddler,” whether “Wandering Stars” would work as a musical.

Stein, who died in 2010 at age 98, said no; the book was too sprawling, with too many characters. They looked for other works from the same author and came across a book of short stories titled “Tevye’s Daughters: Collected Stories of Sholem Aleichem.” That compilation of short stories became the basis for “Fiddler on the Roof,” which won nine Tony Awards after it opened.

The show got off to a rocky start during its out-of-town try-out in Detroit. A newspaper strike there “cut into promotion efforts and has seriously affected attendance and box office sales,” The New York Times reported in its Aug. 8, 1964 edition, citing a “theater official.” No critics reviewed the show as a result of the strike.

On opening night, Harnick said the performance dragged until nearly midnight and audience members left early. But Harnick said they were walking up the aisles backwards; they wanted to take in every minute of the show that they could.

“It was a very personal show to me,” Harnick said. He added he didn’t grow up in a Jewish neighborhood, but it contained a synagogue and Harnick celebrated his Bar Mitzvah ceremony there.

Harnick said he, Bock and Stein tried to find a balance between the Jewish and universal aspects of the story.

Not only did they strike that balance, Harnick recalled American actress and singer Florence Henderson commenting that the show “is about my Irish grandmother.”

“Do they understand this show in New York?” Harnick said Japanese audiences asked in their country after seeing the musical. “It’s so Japanese.”

Harnick said Iceland at one time honored a composer. During one year, they honored Bock.

“In Iceland they do ‘Sunrise, Sunrise,’” Harnick joked, referring to the musical number “Sunrise, Sunset.”

Another show resulting from the musical efforts of Harnick and Bock also contained Jewish characters. "The Rothschilds," which premiere in 1970, relates the rise of the Rothschild family, a rich clan which descended from Mayer Amschel Rothschild, a court Jew. Mayer established his banking business during the 1760s.

As a result, the musical’s creators restructured the true tale.

While Harnick looked back on his career during his address at Palm Beach Dramaworks, the future of musical theater also came up. A boy who appeared to be a teenager asked Harnick what advice he’d give to aspiring musical theater writers. His answer: use every opportunity to put your work before an audience – no matter how small or insignificant that audience might seem.

“I was so depressed by his brilliance,” Harnick said.