Messiaen: Quartet for the End of Time

An Important Remembrance in this Season of Renewal 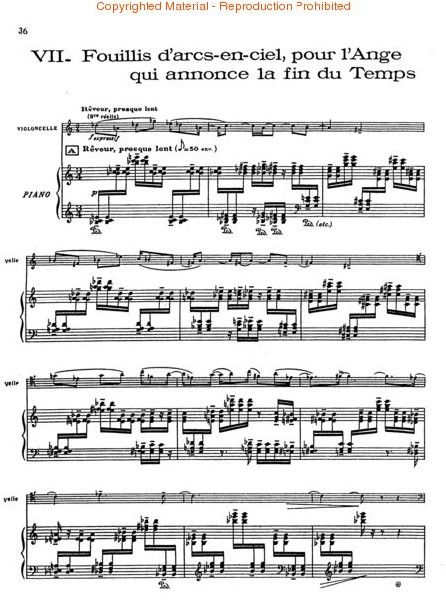 An Angel, the violin, announces the end of time. 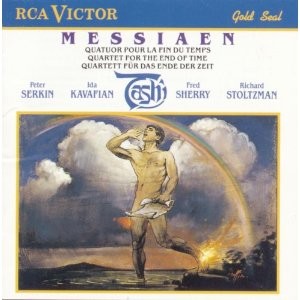 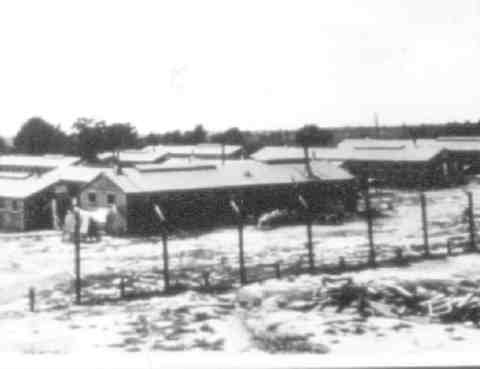 Transcendent music against a bleak background.


Messiaen’s Quartet for the End of Time is remarkable in many respects. Performed by brilliant young artists on the violin, cello and piano, and a consummate clarinetist, who spent the first years after music school selling pianos and racing Ferraris, the piece glistened, giving to the ear a sense of voluptuously refined pleasures and suggesting noble sentiments.  In a private home on the 60th floor in Manhattan, a stunning sunset settled into the New Jersey near horizon, as orange-blue chords, the harmonies of heaven and distant chimes echoed in the concert room.

The history of the piece is well known, but bears repeating, as do all the stories of artists who somehow soldiered on in the face of the Nazi assaults.

Messiaen was captured when the Nazis arrived in Paris, and walked with musicians Pasquier and Akoka clinging to his clarinet, more than forty miles to a large field at Toul, near Nancy.  The Germans hadn’t been prepared for victory, so the men spent ten days in the fields before they were transferred to prison camps.

Akoka began to learn Abime des oiseaux, a piece Messiaen had composed for him in Verdun.   Pasquier was the music stand.  Akoka complained about the difficulty of the piece while Messiaen kept repeating, “You’ll manage.”

Then Messiaen, Pasquier and Akoka were herded along with thousands of others into padlocked cattle trucks and transported half-way across Europe to Gorlitx in Silesia, about 55 miles east of Dresden.  The four day journey was taken without food or drink, and in the midst of filth and excrement.

Prisoner No. 35333 in Barrack 19A of Stalag VIIIA, Messiaen started determent in a hospital, cared for by Polish nuns.  Over his bed, a portrait of Hitler was framed by a crucifix and a picture of the Virgin Mary.

When he got to the Stalag, he found Jean Le Boulaire, a violinist.  In the washrooms, the violinist, clarinetist and Pasquier, who was able to buy a cello after his fellow prisoners took up a collection, performed a new trio Messiaen wrote.  German guards and fellow prisoners enjoyed the concerts, which became a regular diversion.

Lack of food and the cold induced Messiaen to dream violent images of the Apocalypse, with Angels circled by rainbows heralding the end of time.  When vast clouds of purple and green tore across the sky before dawn one morning, Messiaen thought the prophesies of Revelation were coming true.  It was the aurora borealis. He writes in his own program notes about the blue-orange chords associated with the Angel.  Messiaen was a synesthesiologist.

Taking the trio he had composed to a priest’s hut, he expanded it into the Quartet for the End of Time with paper and pencils provided by a German officer, Captain Karl-Albert Brill. At its premier performance, Messiaen performed on an upright piano whose keys stuck. Delicate and yet searing, solos by each instrument are stunning.

Performed in New York, Naomi Kudo was pianist. She has won many international competitions and now studies with Richard Goode at Mannes.  Listening to her, one thinks:  How does she do that?  Her music-making has light touch and yet is so wrenching.

Avigail Bushakevitz was born in Jerusalem, but grew up in South Africa.  When she performed this quartet at the Juilliard Chamberfest, her performance was signaled out as ‘riveting.’  And that it is.  Sometimes anarchic, she bows almost off the bridge, still producing the distinct tones of her instrument.

A passage from Messiaen's Fetes des belles eaux turned into a sublime praise to the eternity of Jesus for cello and piano.  First heard in the shadow of the Russian and German pavilions at the 1937 Exposition, it was approrpriated for this quartet in the middle of a Poland vanquished by these same dictatorships.

Sonna Kim on cello is assigned the task of making ‘the word’ manifest.  In long, slow phrases she beautifully magnified this concept.

Joseph Rosen on the clarinet brought the group together.  His solo in the third movement, An Abyss of Birds, has sustained tones, which when they are performed by a musician like Rosen, transport us to a still forest where only bird songs and warbles break the silence.  Messiean was an ornithologist in addition to playing the organ and composing.

A fearsome sound of trumpets was created for the ensemble in unison, Dance of Fury.

Two movements are dedicated to an Angel who announces there is no more time.  For Messiaen, this meant both outside time in the world, and also in music.  He deploys music without conventional meters.

A soaring solo for violin gently supported by the piano created a luminous conclusion to the work.

In the early months of the War, Messiaen worried about losing his technique and fading from the musical scene.  In fact, a work like Quartet for the End of Time remains as a turning point in his career.  When it was performed at the end of the war, composer Poulenc wrote:  “Messiaen remains the event of the winter, which is entirely justified.”  And so he was on this lovely early March evening, on a day in which time sprang forward for a Quartet performed, resplendently ecstatic, out of time.  A symbol of spirtual renewal in the darkest of times.