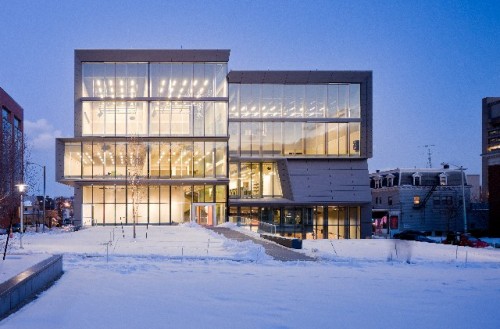 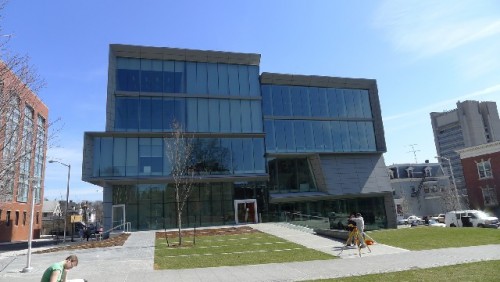 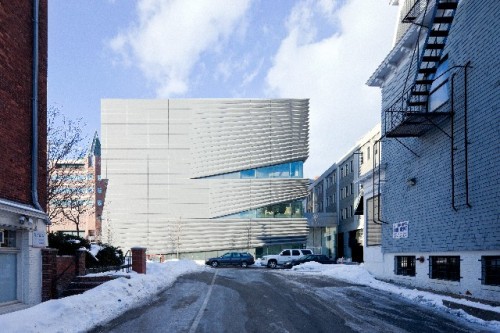 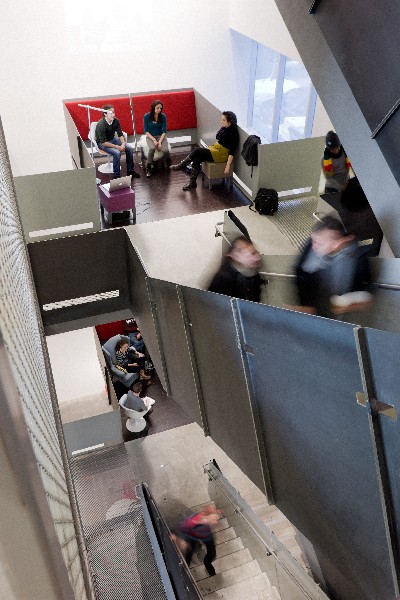 Interior of Granoff Center for the Creative Arts, Brown University 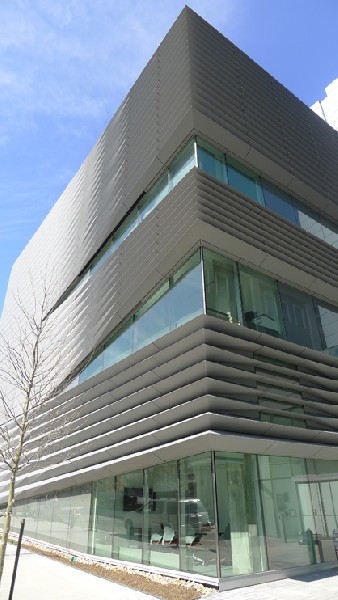 Edge of the Facade of Granoff Center for the Creative Arts, Brown University, Photos by M. Favermann 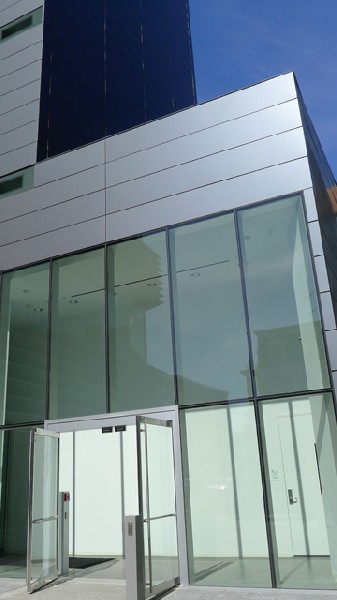 Side Entrance to Granoff Center 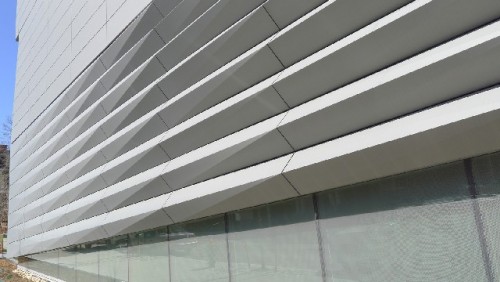 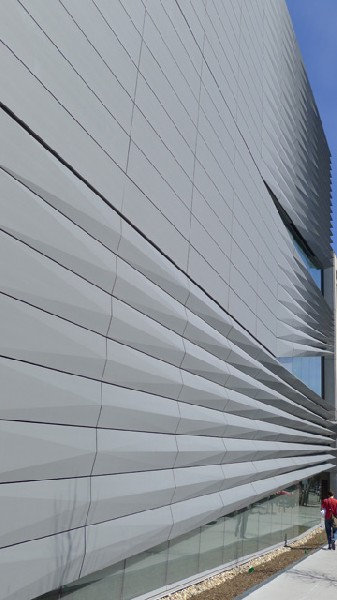 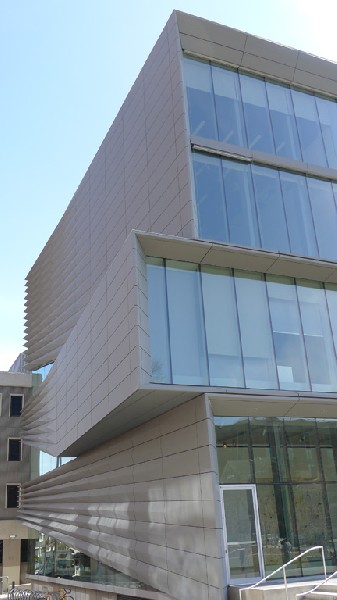 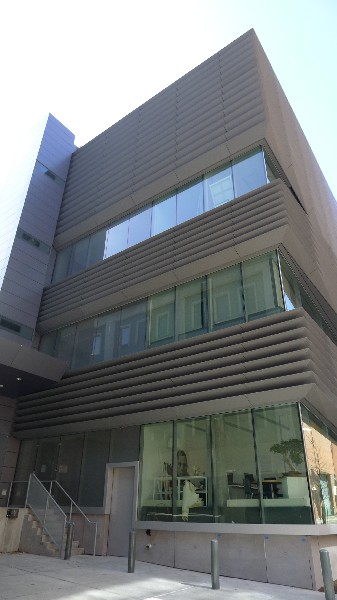 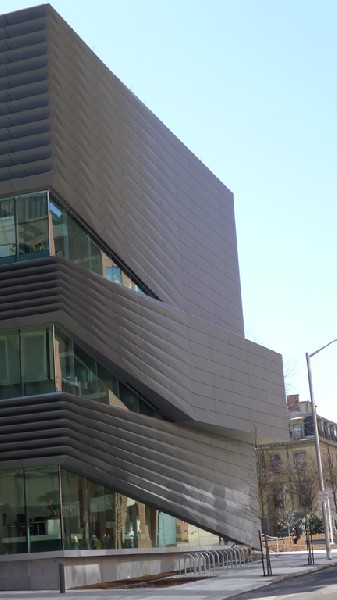 Since the Opening of Boston's Institute of Contemporary Art in 2006, During the last decade, the visionary and highly productive architectural firm of Diller Scofidio+Renfro have been making a strong and strategic architectural statement. Their work has aesthetically and elegantly embraced institutions, museums and even parks and open space. The firm's newest completed project is a dramatic multiarts center on the Brown University campus.

Opened in early February 2011, The Perry and Marty Granoff Center for the Creative Arts at Brown University in Providece, RI, is a sleek 38,815 square-foot, three-story, zinc-clad, wonderfully glazed interdisciplinary arts center set at the heart of the College Hill campus.

Structurally, the Granoff Center is monumental without being monsterous as well as contemporarily contextural in a bricks and mortar traditional campus. It is a sculptural building without dominating its landscape setting. Its visual quality is underscored by the building's dominant glass windows and its horizontally fluted or pleated zinc clad facades translated into beautiful sculptural form and aesthetic resolution.

Costing a bit less than $40-million, the Granoff Center is a building dedicated to encouraging faculty and students to create new directions for research, teaching, and production across the boundaries of individual arts disciplines. This is to happen among artists, scientists, and scholars. Historically, this has always been talked about, even sometimes seriously attempted (The Bauhaus, Black Mountain College, etc.), but never really achieved in a sustained way. However there is always hope, and in terms of form following function, this structure may just resonate.

The notion of "collaborative informal spaces" has been tried in other contemporary structures. Concepts of "street" and shared public spaces have been attempted with scientists and artists at MIT in Cambridge. In Frank Gehry's iconic Stada Center (2004), the results of true collaboration and even simple collegiality have seen mixed results at best and no real achievements at worst. The design of Maki and Associates's Media Lab (2010) has tried to allow for collaboration and synergy through transparency of interior walls. We will have to wait and see if it will work better at the Granoff Center at Brown. It would be terrific if it does.

The Granoff Center includes: The Martinos Auditorium, a 218-person auditorium and 35mm screening facility, which will serve as a performance venue and lecture hall; four production studios for interdisciplinary work; the Cohen Gallery, which will host interdepartmental, student, and visiting artist exhibitions; a recording studio for professional sound recording, sound design, and multimedia work; the Khoo Teck Puat Multimedia Lab with state of the art equipment and software; The Cogut Physical Media Lab to be used for new directions in teaching and research for production of and research in sensors, robotics, and physical computing; and a small outdoor amphitheater wired for sound and video, allowing outdoor performances, film screenings, and installations.

According to Charles Renfro, partner-in-charge for the project, “In creating the design for the Granoff Center, we needed structural elements that would stimulate the creative process from virtually every aspect of the building. The Granoff Center is a merger of architectural gesture and academic pedagogy. Our strategy was to encourage and illustrate collaboration across every level.”

The Granoff Center is conceived by the architects as the next generation loft building with a twist. In addition to its large floor platforms, high ceilings, and long structural spans that allow more flexibility, the intent is for the architecture to foster a collaborative environment. The concept involves three stacked floor slabs that are cut in half and slipped vertically to create six half-levels divided by a shear glass wall. The intentional misalignment connects each studio to one above and below while still maintaining light, sound, and visual control.

An internal stairway connects all levels and doubles as the hope for social hub of the building; its landings are expanded into furnished breakout spaces for accidental or planned encounters between students and faculty. A split-level strategy is also realized at the ground: The landscape in front of the building is split in two. One half is tilted up to form the entrance lobby and public gallery; the other half is lowered down into an outdoor amphitheater that flows into the interior recital hall. The transparent west facade is open to the campus and general public while the surrounding zinc skin is pleated at the sides to bring in light.

Shawmut Design and Construction built the Granoff Center. The building team has applied for a gold certification from the U.S. Green Building Council’s Leadership in Energy and Environmental Design (LEED) program. This is the nationally accepted benchmark for the design, construction, and operation of a green building. Apex Green Roofs designed the self-sustaining green roof while Jaffe Holden designed acoustics for the Martinos Auditorium.

“The Granoff Center is the embodiment of a movement that started 40 years ago to revisit the University’s approach to excellence in liberal arts education through cross-departmental ways to teach and learn,” said longtime faculty and artist Richard Fishman, professor of visual art and director of the Creative Arts Council at Brown. “The building was designed specifically to serve the synergistic nature of the program. It encourages just the type of interdisciplinary collaboration Brown has historically been noted for, and will continue to develop in the future.”

University students attended their first classes in the Granoff Center on Wednesday, Jan. 26, 2011. Courses include “Experimental Musical Instrument Design,” “Curating Contemporary Art,” and “Narrative and Immersion.” The building also includes elements that will open the Center to the community, including the Cohen Gallery, which will house open exhibitions and installations, performance spaces, as well as an outdoor amphitheatre.

Previously known for conceptual, temporary and exhibition environments, in the last decade among other prominent projects, Diller Scofidio + Renfro Architects has designed the renovation and expansion of Lincoln Center in New York City, the new Institute of Contemporary Art on Boston Harbor, and the innovative High Line park in lower Manhattan. Current projects in progress include the Berkeley Art Museum and Pacific Archive, the Museum of Image and Sound in Rio de Janeiro, Columbia University Business School, and an inflatable event space at the Hirshhorn Museum and Sculpture Garden in Washington, D.C.

With a spectacular geometric form, the Granoff Center at Brown is a wonderful example of Diller Scofidio + Renfro Architects aesthetic. It is an architectural achievement, both beautiful and fitting.