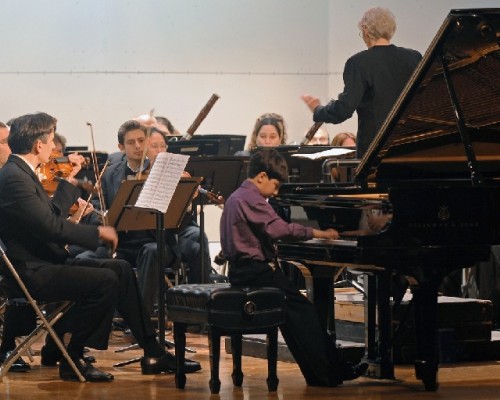 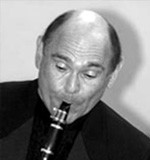 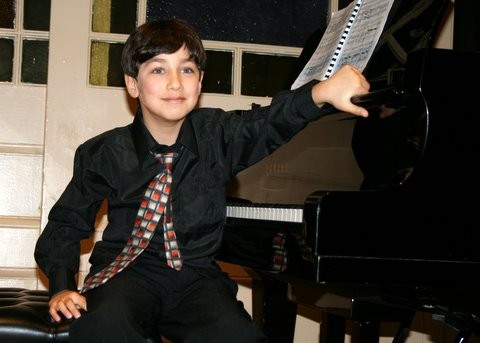 If you shut your eyes, you might think you were in the first row of Carnegie and Vladimir Horowitz was performing on stage. The piano is played with a seemingly facile touch, the music delicate even when it is dynamic.And someone who is thoroughly musical is at the keyboard.

Instead this was another fantastic afternoon concert at generous Joseph Rosen’s, just around the corner from Carnegie.  Rosen, in addition to innovative programming which often introduces deserving but not well-known composers, also showcases up and coming talent.

This afternoon Rosen is impish in his introduction.  The surprise is that he did not hide the guest pianist behind a screen.  Rosen does not want us to listen to the pianist knowing that he is a child.

A woman seated next to me, whose view was obscured, said, “This is not a child’s performance.  It is too mature musically.”

How mature Maxim Lando will sound a thirty if he continues to perform is delicious to contemplate.

Maxim studies with two teachers.  One is his mother, a formidable artist in her own right. A recent article in the Times magazine tackled the problem of prodigy.  Lang Lang is presented as a concert performer who does not resent his father’s push.  The father at one time told Lang Lang to jump off a balcony and kill himself when he did not win a competition.  Lang Lang is a freak performer.  Introduced to the world during the Beijing Olympics, 40,000 young Chinese children took up the piano after hearing him.  He was catapulted into an international orbit.  An extremely generous supporter of young talent, Lang Lang simply is not the musician his peers are.

Maxim Lando at ten has all the stuff of a wonderful musician already on display.

Here are his sensitive, talented parent’s answers to dealing with prodigy.

SH:  How do you assess Maxim’s talent?

PL:  This one is hard for me to answer, but I am always astonished by how he continues to grow.

SH:  Does he take great pleasure in practicing and performing?

PL:  Maxim loves performing, and he always takes great pleasure in his practice time. Our usual problem is getting him to stop and go to bed!

SH: How does the fact that you are his teacher impact on his studies?

PL:  I'm sure it always helps to have musicians in the house.

SH:  You mentioned that you were looking for another teacher.  How did you come to this decision?

PL:  Since Maxim was almost 4 years old, he has been working with both myself and also a wonderful woman who teaches at our school. A new teacher would bring new ideas and techniques to explore. I have always been worried about making things too serious for Maxim, but I feel that now he is at a point where this kind of change could be exciting for him.

SH:  How does what appears to be ‘mature’ emotional musicianship emerge from someone who is immature?  Here is a quote from a ‘child prodigy’  “I had an amazing capacity for imagining these feelings, and that’s part of what talent is. But it dries up, in everyone. That’s why so many prodigies have midlife crises in their late teens or early 20s. If our imagination is not replenished with experience, the ability to reproduce these feelings in one’s playing gradually diminishes.”

PL:  I don't think that Maxim is "imagining" complex feelings, I think he is simply expressing his own emotions both from the music he plays and through the music he plays. I don't see how that will change in the future except to reflect his current feelings and ideas about life. Maxim happens to be a very sensitive, perceptive, and strong willed kid. It has been his personality since birth.

SH: I sense that you are not an ‘hysterical’ parent.  Has it been difficult for you to remain ‘calm’ and ‘normal’ in the presence of Maxim’s obvious abilities?

PL:  Watching Maxim grow has been such a great pleasure, and I am looking forward to watching and being a part of every phase (maybe not the "snotty teenager", and I hope he doesn't grow up too fast). So far we haven't had any expectations for Maxim to be anything other than what he is (a great kid who happens to love music).

SH:  How would you feel if Maxim dropped his music and became a basketball player?

PL:  Basketball, no way. Ping Pong (which he loves), maybe. Seriously, I will be happy and proud of Maxim whatever he does with his life as long as it is something he enjoys doing, and it is something in some way positive for the world.

SH: Is there a barometer mark for the amount of pressure a teacher or parent should place on a young person?

PL:  Absolutely! The pressure should be gauged by the young person's inner desires and drive, not the parent or teacher's.

SH:  Normal families are happy families and you certainly seem to be one!  Although Maxim’s ability might skew this.

PL:  We have our grumpy times like every family, but I can also say as a family we are very happy and feel incredibly lucky. I think Maxim's special abilities in music allow us to share something that we all three feel very deeply about: the joys of music.

Dr. Alice Ginott, a child development specialist, comments that whether a child should be pressed to do the work necessary for concert performance depends on whether or not this is the child’s idea.  Clearly Maxim’s effort is his own choice.

Dr. Dorothy Indenbaum, a musicologist and expert on Fanny Mendelssohn, argues that no child should be put on stage before the age of 18.  This seems to be an over-rigid parameter.  But the question is a delicate one.  Michael Rabin, the great violinist who first appeared on the Carnegie stage at 12, killed himself.  Joshua Bell continues to thrive.

And Joe Rosen’s musical afternoons on the way to Carnegie continue to provide pleasure and surprise.  In a Katchaturian Trio Lando had the added support of Rosen himself on clarinet.

Maxim Lando at ten has a very old musical soul.  If you enter his website maximlando.com, close your eyes after you punch up the performance videos.  I listened first to a charming rendition of Chopin Preludes and Etudes.  Then I heard a Faure Impromtu No. 2, and could only imagine Horowitz at Carnegie, with that shimmering tapestry of notes, but ever so clear approach to the keyboard, and the molding and shaping of phrases straight from the musical angels.

Lando is going to play the celeste part for Charles Griffes's The Kairn of Koridwen on the March 18th Jupiter concert. This is Lando’s first time ever playing (or even seeing, for that matter) a celeste, and the also the first time dealing with long rests and ensemble issues involved with a larger chamber group. The concert is with the Jupiter Symphony Chamber Players on March 18th at the Good Shepherd Presbyterian Church, 152 West 66 Street, West of Broadway in New York.  Go and hear a wonderful pianist play the celeste!