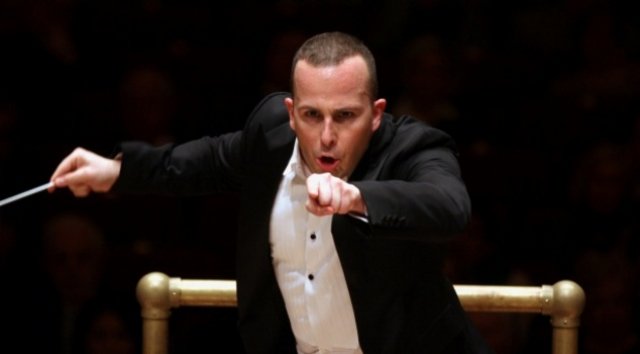 Nezet Seguin conducts at Carnegie Hall
The program was ambitious, reflecting both the sound and tradition of Philadelphia and the urgent need to make the concert hall a living workshop for composers to try out new sounds and new ideas. It paired the New York premiere of a new Violin Concerto by Dutch composer Michel van der Aa with Rachmaninoff's Symphony No. 2. The featured soloist in van der Aa's piece was Janine Jansen, who is currently offering a Perspectives residency at the Hall. This work was written for her.
Van der Aa's piece proved to be cast in the traditional three movements. However, that was the only resemblance between this demanding work and any kind of  tradition.  Jansen opened the first movement with a thematic line that was all angles and elbows, a taut, nervous sound that owed something to the serialists but was all its own invention. The orchestra answered Jansen with a sharp tongue of its own, echoing and embellishing her first thematic statement before establishing a forward moving pulse in the percussion and low strings.

The slow movement began at a quick walk, making further demands on the soloist, who was joined at one point by the concertmaster and the first cello for a lengthy digression by all three instruments. The finale featured a crazed momentum that spun forth from the soloist and the accompanying strings, annotated by the thump of carefully placed spacial percussion: two struck bass drums at opposite sides of the stage. Orchestra and violin built to a series of energetic surges supported by the low strings and brass, with the echoing drumbeats adding the the overall sense of urgency.

Rachmaninoff is something of a Broad Street specialty, as this orchestra worked with the composer himself, playing accompaniment to Rachmaninoff's own recordings of his four piano concertos under Eugene Ormandy. The Second Symphony is the only one of his three that achieved any kind of mainstream popularity, and is beloved for its expansive and thematically unforgettable slow movement.

Nézet-Séguin entered the first movement in a manner conscious of this great symphonic legacy. The slow, mournful introduction pitted the brass against the low strings before yielding to themes in the upper strings and an elegant solo for the English horn. Each of these melodic ideas was laid out in a sound, logical manner before the Allegro started, launching the orchestra into the late Romantic ideals of this work with a mix of sentiment and sober thought.

The Scherzo has its own demands, including a difficult central fugal passage that the Philadelphia string players seemed to take a particular delight in. When the main theme came roaring back it did so in an arrangement that would be ideal in any textbook about symphonic orchestration. The famous slow movement spread its wings in a leisurely fashion, lulling the rapt audience before rising to a muscular climax. The finale served to release all of this built and earned energy in a fury of folkish energy, bursting into its dizzying, triumphant dance figure with an abandon and joy: this kind of music played at the highest level.  (Reprinted by permission of Superconductor.)