Shakespeare and More in Cincinnati 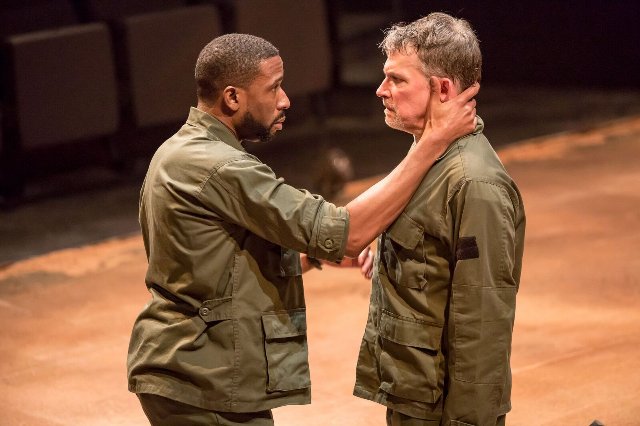 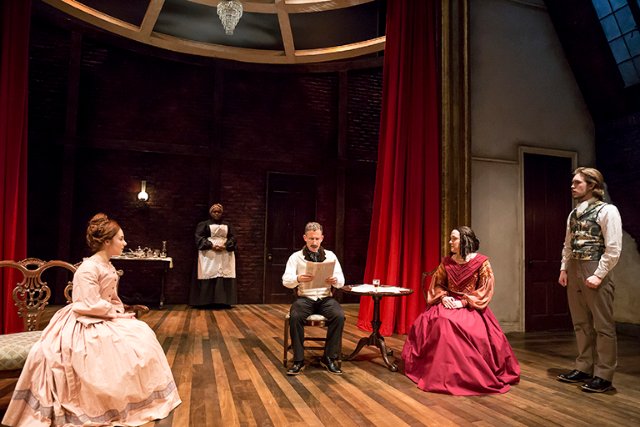 Theater and history buffs have a rare chance in Cincinnati to witness Shakespeare like they’ve never experienced in school.

Chances are, you never studied Othello in the modern, painfully-timely manner Cincinnati Shakespeare Company (CSC) is presenting the Bard’s tragedy.

Folks also might not have learned about the first African American actor to play the Moor. That person is 19th century performer Ira Aldridge.

The productions represent a collaboration between Ensemble and CSC.

Members of the American Theatre Critics Association (www.americantheatrecritics.org) received an up- close look at Cincinnati’s vibrant theater scene during a recent regional conference.

Aldridge toured throughout Europe and received top honors from heads of state. However, his professional career hardly ran as smooth as velvet.

He took over the part from Edmund Kean (1787-1833). The British Shakespearean stage actor collapsed while performing the role of the Moor.

Aldridge’s career serves as a reminder that for all the strides we’ve made toward racial progress in more modern times, various incidents have set America back.

The real-life protagonist of Red Velvet overcame racial prejudice in the U.S. to become the first black actor to achieve success on the international stage. Yet for all his triumphs, prejudice and icy receptions awakened Aldridge to a cold, hard reality. In Red Velvet, Aldridge joins the all-white Theatre Royal company, which is stunned that an actual black man will perform the role.

Previously, Kean and other actors portrayed the Moor in blackface. Fierce protest among citizens was widespread when Aldridge took on the role.

Parliament was preparing to vote in favor of abolishing slavery in British colonies. During Ensemble Theatre’s production, we can hear the chants of what sound like angry throngs outside the Theatre Royal.

Such protest and rancor are common today. Despite gains we’ve made in more modern times, such as electing America’s first black president, division strongly afflicts the world in 2018. We cannot boast that we’re maintaining a cooperative spirit such as the one apparently existing between Cincinnati Shakespeare Company and Ensemble Theatre Cincinnati.

Lynn Meyers, Ensemble's producing artistic director, said ETC and CSC don't compete for ticket buyers. Her company is "a very different theater than Shakes," she said, using a nickname for the Bard of Avon.

Meyers recalled the time that Ensemble Theatre received a first offer to mount an adapted stage version of George Orwell's cautionary tale 1984. She passed on the offer to CSC.

Meyers added she thought Brian Phillips, that company's artistic director, might want to perform the stage adaptation. She was right. Phillips has scheduled 1984 for performances from Oct. 12-Nov. 3.

Cooperation isn’t a virtue you’ll notice after Aldridge steps in for the ailing Kean.

In the play, the lack of teamwork is particularly personified through the attitude of Charles Kean, Edmund’s son. He’s angry someone is stepping in for his father, who shared the stage with him for years. Joplin convincingly conveys his character’s vitriol. You fear that Joplin’s face will grow redder and redder before blowing up and popping like a crimson balloon.

Red Velvet, an intense, engrossing play, is about perseverance, fighting for what you believe and the power of live theater to enact change, loyalty, or the lack thereof. The ending is a little confusing. Furthermore, it wouldn’t hurt to include more scenes during which Aldridge triumphs in the face of adversity. But overall, this is play, populated with flesh and blood human beings, not mere historical figures, is well worth watching.

CSC’s Othello is not a complete triumph. It is, however, a rendition that nicely mirrors the perpetual state of conflict today.

As director Christopher V. Edwards notes in the program, the modern-day production, complete with 24-hour television news coverage on projector screens, is set “in a Venice…where war is the norm and not the exception.” This directorial vision, carried out admirably by the cast, creates a heightened, tense climate. Within this atmosphere, an aura of jealousy and manipulation seem as natural to crop up as weeds in neglected garden beds.

Borders and barricades dot the landscape of scenic designer Justen N. Locke’s set, which contains signs of ruin. Within this landscape, Iago plots to bring Othello down.

During one particularly squirm-inducing scene, Iago is positioned on all fours like a sneaky wild animal.

His smile betrays a diabolical glee, cunning and evil. It’s clear this is an unrepentant, unfeeling, sick individual.

As Othello, William Oliver Watkins grows naturally from an honorable man with no hint of explosiveness to a volatile, broken human being. There are moments when Watkins’ Othello could be more dynamic and audible. One might also feel that, at least in the beginning, this Othello is too casual and convivial for a military general.

Courtney Lucien tries hard as Desdemona, but fails to convey an endearing quality that would make Othello’s intense love for her seem credible.

A different type of language pervades the bold, original play Kill Move Paradise by James Ijames. It’s onstage in a commendable production through March 24 at Know Theatre of Cincinnati.

This intriguing, mysterious play is based on real events and strongly calls to mind the “Black Lives Matter” movement.

Ijames could’ve penned a naturalistic play condemning the killing of young black men and women by law enforcement. But this playwright displays a daring that’s refreshing. His style clearly communicates his exasperation with the seemingly countless list of African Americans who are gunned down.

Ijames, who is also writing here with a sarcastic, satiric voice, puts human faces to the staggering statistics.

Emotions such as anger, fear, frustration and vulnerability come alive in the play, set in a place that’s open for debate. Some murky otherworld is the setting.

What’s clear is that Isa, Grif, Tiny and Daz, all young, black males, have died too young.

For these characters, there’s no escape. They’re stuck in who knows where. Try as they might, they cannot successfully ascend the skate park-like slope; they simply fall back down.

They enter the space roughly, like garbage bags thrown down a high, rocky mountain and land with a thud.

Within the thrust seating configuration of Know Theatre’s intimate stage, we’re watching the actors from all sides. This reinforces the characters’ sense of entrapment.

An earthquake-like sound and thundering sound effects adds to the foreboding aura of the proceedings.

These men are busy, despite the fact that they populate a plotless play. They nakedly reveal their feelings, speak in street lingo, act playfully as part of Ijames’ satiric message and panic.

The characters look at us in an accusatory fashion, quizzically and closely, as though we’re aliens, often for moments at a time. These wounded souls step off stage and come uncomfortably close to some audience members.

The play contains a Brechtian quality, which seeks to unnerve us. Tense pauses, which the actors make palpable under Piper Davis’ assured direction, convey a Pinteresque quality.

Behind the silence and staring, the message is clear: Through our apathy, we’ve become complicit in the police shooting deaths of all the young black men and women.

Not all the plays ATCA members saw centered on race. The world premiere of Deborah Zoe Laufer’s Be Here Now was also an option.

The play poses questions that won’t result in easy answers. How far would you go to seek fulfillment and happiness? Is it better to experience emotions naturally, rather than alter emotions with substances such as drugs? How do you find meaning in life? Most significantly, the play asks us to consider: Is the quality of a short life more important than the quantity of a life lived miserably?

This play, with pathos and humor, sounds like Samuel Beckett, Anton Chekov, Thornton Wilder, Annie Baker and possibly Tom Stoppard all had a hand in writing it.

The comic-drama, which contains surprising revelations, is about a sad woman, Bari, seeking joy and satisfaction in life. Ironically, she works at a fulfillment center, but her perpetually cheerful co-workers have practically no effect on her mood. She must feel like the garbage with which an eccentric character named Mike uses to make art. The symbolism in this relatable, touching and funny play is clear: If she can’t do it herself, can someone make Bari feel “whole” again, just as Mike makes what otherwise would be discarded garbage useful?

The acting in The Cincinnati Playhouse in the Park production is solid but unspectacular. It’s too one-dimensional. Emily Kratter as Luanne, one of the cheerful fulfillment center employees, is too cartoonish in the role. She comes across as a caricature, rather than a real, flesh-and-blood human being.

Michele Ragusa fares better as Patty, a wide-eyed, no-nonsense woman who believes that “tough love” is the way to convince Bari she must continue living. Ragusa has a convincingly commanding demeanor in the role and demonstrates deft comic timing. Still, her performance could be more varied. Ragusa’s wide-eyed look seems like a mask she’s wearing that never changes.

Torsten Hillhouse is appropriately understated as the loner, but naturally ratchets up his emotions when  necessary.

Eva Kaminksy projects the right type of sad and cynical demeanor, but is equally effective during the character’s happier moments.

While this production has ended, the play will also run from April 6-22 at Theatre Lab, the professional resident company of Florida Atlantic University in Boca Raton.