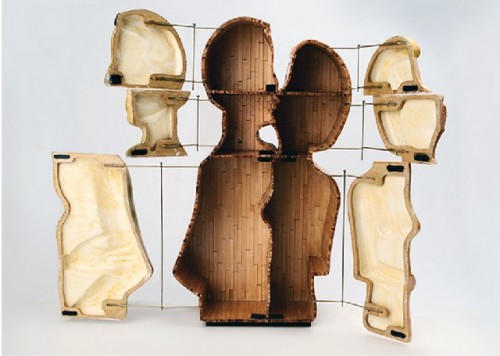 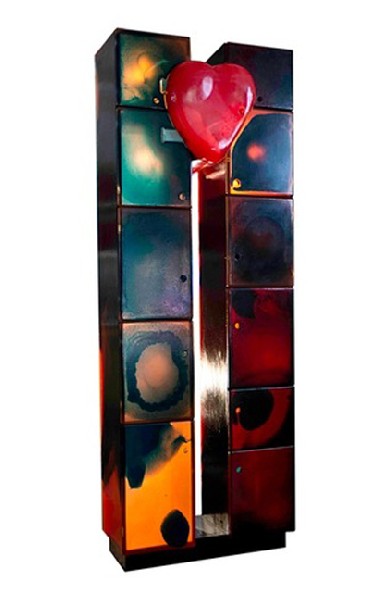 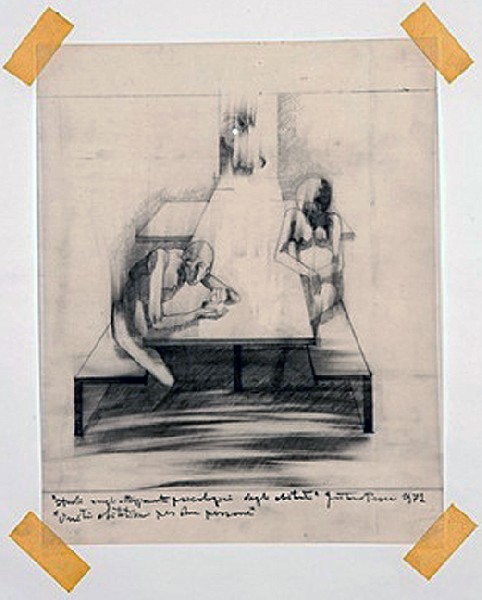 Visionary architect, designer and artist Gaetano Pesce will have his first solo, New York exhibition in 25 years at Fred Torres Collaborations (527 W 29th St  New York, NY 10001) from March 21-May 25, 2013. The show focuses on issues of love and empathy, be it for ourselves, each other or the world, that have been important themes in Pesce’s work.

L’ABBRACCIO, (The Hug) the name of the exhibition, refers to a cabinet designed by Pesce in 2009 of two people locked in an embrace. In addition to its “namesake” cabinet, the exhibition will feature some of Pesce’s rarely seen drawings, maquettes, lighting and furniture from the 1970s. An opening reception will take place on Thursday, March 21 from 6-8 pm.
Since the 1960s, Gaetano Pesce has been challenging the dogma of traditional aesthetics by embracing an art, architecture and design of expressiveness that is a commentary on reality, color, new materials, figurative representation and political commitment. His poetic imagination and his continued use of humor and irony to attack the standardization of the mass-produced object and architecture, sets him apart from all other designers and architects.

Pesce continually exploits the technical qualities of materials such as resins, polyurethanes and silicones in order to create objects and projects that have a point of view and make a strong artistic statement.
“The exhibition showcases the narrative and heart in Pesce’s work,” says Fred Torres. “Pesce’s interests go beyond beautiful and functional objects. He’s an artist who continually pushes the envelope by exploring themes of love, sadness, enlightenment and the pursuit of truth in everything he does” added Torres.
The concepts of Eros, Philos and Agape define the three-room installation. L’ABBRACCIO cabinet, in the first room, represents Eros or passionate, intense desire. In addition, drawings of discarded clothes and a rag chair maquette, alluding to garments belonging to L’ABBRACCIO lovers, are on view here.
The theme of the main room is Philos or fraternal love. Pesce’s rarely seen Habitat for Two drawings and Commune for Twelve drawings will be featured in this space. These drawings tell the cautionary tale of a failed society that has retreated underground and were made as a conceptual project for the New Domestic Landscape exhibition, at The Museum of Modern Art in New York in 1972. Also included is a scale (1:10) maquette of the realized space and the accompanying film.
The theme of the third room is Agape, unconditional, divine and enlightened love.  Pesce’s Church of Solitude project drawings, the 9-11 Cabinet and Italia in Croce (Italy Crucified) installed here are Pesce’s direct responses to tragedy and isolation. The Church of Solitude project tackles the issue of urbanization. Conceptually, it presents a refuge where one can isolate oneself from, yet still work within a metropolis.

The 9-11 Cabinet is a functional, resin-made, representation of Pesce’s entry for the World Trade Center Memorial competition. The cabinet and the memorial design have two tower structures, reminders of the former World Trade Center towers, connected by a heart. The dimensions of the cabinet are 8’x 3.25’x 1.20’.

The Italia in Croce sculpture is a comment on the state of Italian politics. This piece is Pesce’s call for a dynamic, young, political class that will honor value, creativity and will provide real solutions for Italy’s problems.
About Gaetano Pesce
Gaetano Pesce was born in La Spezia, Italy in 1939 and studied Architecture at the University of Venice. He has lived in New York for the past 32 years. Pesce has worked on private and public projects in the US, Europe, Latin America and Asia.

He taught at the Institut d’Architecture e d’Etudes Urbaines in Strasbourg, France, at the Carnegie Mellon in Pittsburgh, PA, at the Domus Academy in Milan, at the Polytechnic of Hong Kong, at the Architectural School of Sao Paulo, Brazil, and at The Cooper Union in New York City. Pesce exhibits his work worldwide.

In 1996, the Pompidou Centre in Paris presented an exhibition that showcased 40 years of his work. In 2005, the Triennale di Milano organized a retrospective of his work, which was also shown at the Vitra Museum in Germany. Pesce’s most well-known architectural commissions include the Hubin’s Apartment in Paris (1986), the Organic Building in Osaka (1989-93), the Shuman’s residence in New York (1994) The city of Osaka, declared Pesce’s Organic Building, with its vertical garden upon the façade as a ‘civic landmark’ in 1994 and the Manhattan office for advertising agency TWBA/Chiat Day, was hailed by the New York Times as ‘a remarkable work of art ... that bears no resemblance to the sleek, hard- edged aesthetic we associate with the modern.
Back to Fine Arts Section Home