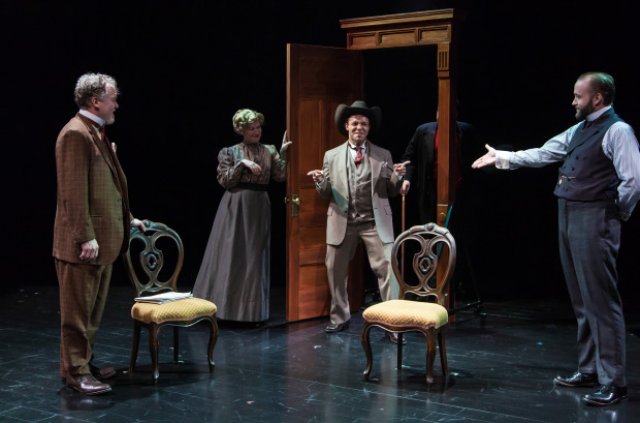 The third and final play of what I think of as the “Ken Ludwig in Connecticut” season has opened at Long Wharf. Baskerville: A Sherlock Holmes Mystery runs to March 25.

Unfortunately, this is the weakest of the three plays. Ludwig inserts humor into each of his works. But this time, it seems overdone: it could be described as Monty Python meets Sherlock Holmes.

Five actors play all of the roles: actually, three actors play all the roles other than Dr. Watson and Sherlock Holmes; this means so many quick costume changes that the dressers took bows at the curtain call.

Ludwig stays relatively faithful to the Sir Arthur Conan Doyle mystery novel The Hounds of the Baskervilles. Holmes is asked to help protect the newest heir (Sir Henry) to Baskerville Manor and the estate after the previous owner was found dead with a look of terror on his face. The back story includes an early evil ancestor who was killed by a large, ghostly hound dog. Sir Henry has just arrived from Canada and immediately receives a threatening letter.

As Watson and Holmes investigate there are mysterious people galore: Barrymore and his wife who both work at Baskerville Hall, the Stapletons – a brother and sister who once ran a school, an escaped murdered (Seldon), and Laura Lyons, a woman who had been involved with the deceased master of the hall.

Ludwig has maintained the skeleton of the plot, but has turned it on its ear. To what extent some of this is the contribution of director Brendon Fox, is on clear.  The script has turned Sir Henry from a Canadian to a Texan cowboy for no apparent reason except to get laughs from the accent and costumes including chaps and a 10-gallon hat. Mrs. Barrymore is given a middle-European accent, where certain letters are mispronounced (“vitch” for “which”) to supposed comic effect. And Mr. Stapleton, who is naturalist, is portrayed as a cross between a mad scientist and a bad Oscar Wilde imitator.

The result of these rather bizarre characters is that the suspense is totally lost. The plot is convoluted enough on its own, but with the burlesque type characters, the constant changing of costumes and more, not only do we really cease to care who is the murdered but even when there is danger, suspense is at a minimum.

Ludwig, in addition  to these exaggerated characters, has included some scenes that while in the original book are not necessarily necessary to the plot: two scenes attending opera whose only purpose is to allow a spoof of opera singers, and a char lady in the first scene whose only purpose seems to be to change into another character before our eyes.

The actors – particularly the three who are constantly changing costumes, wigs, and accents work very hard. They certainly don’t have to go to the gym during the run of the show. But it must asked if this hard work leads to an effective production? The three: Kelly Hutchinson, Christopher Livingston and Brian Owen, make the many switches easily if frenetically and never seem to forget which character they are playing at the moment.

For some of the audience, the answer, the night I saw it, was definitely yes; but there were empty seats following the intermission.

Daniel Pearce is Dr. Watson, who has a larger role in this story; he is not only the narrator, but Holmes sends him to Basketville Hall to oversee the safety of Sir Henry. Pearce does a good job with the part. Holmes is played by Alex Moggridge. He doesn’t quite have the superior air that Holmes is famous for, not does he look like most depictions. Even when he dons the famous coat and hat, it seems like it isn’t appropriate.

But it is not the acting that bothers me.

Ludwig wrote this play in 2015 and one must one wonder how much the very successful 39 Steps influenced him. In case you don’t remember, that was a version of the Alfred Hitchcock suspense movie, played by just 4 actors – one the lead, one woman playing all the female characters and two men playing the male. It featured creative stage sets and effects. But in that play, although there was humor, it still was a very suspenseful thriller.

Ludwig has forgotten the suspense.

But, if you like burlesque or broad slap-stick humor, this may be your cup of tea. At times it reminded me of the skits Sid Caesar used to do on TV.