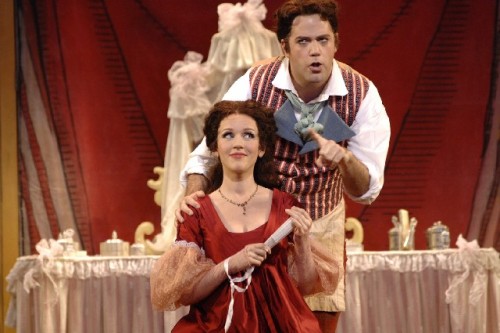 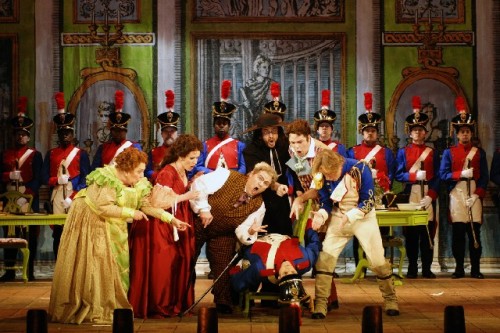 All six cast principals join forces to wear down an officer of the local police force (Gregory Zavracky) in the high-spirited conclusion of Act I. 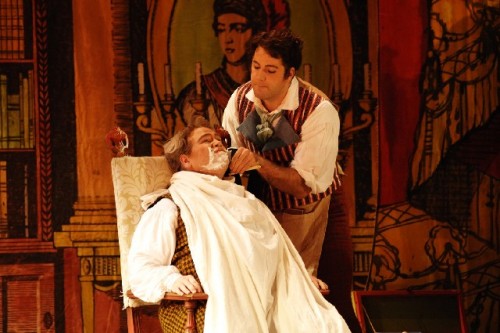 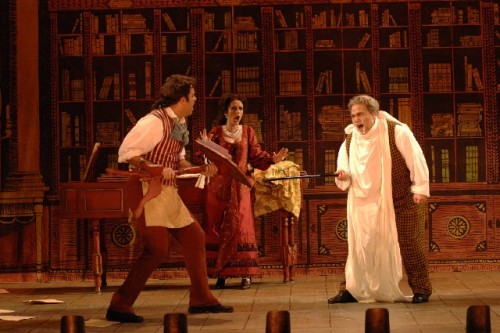 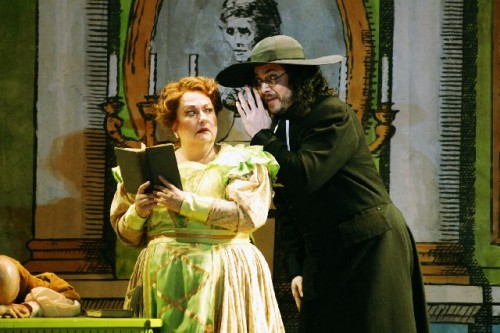 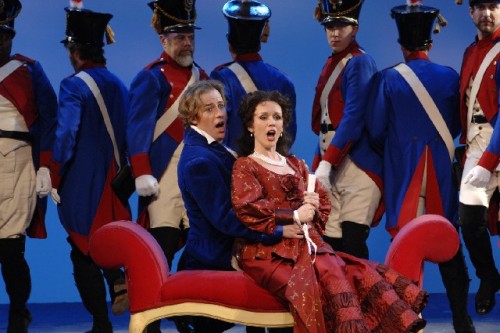 Tragedy is easy: we all die and fear its approach whether unexpected or long drawn-out; we can all relate to the genre because death defines it. Comedy, by comparison, is hard. There is no universal sense of what’s funny. Each culture and generation has its own understanding of humor. Thus, the miracle of certain works like Shakespeare’s “As You Like It” and Gioachino Rossini’s “Il Barbiere di Siviglia,” both of which have been produced and drawn laughter from audiences since the time they were created.

There are those who moan the appearance of yet another Barber in the opera house when neglected works go unproduced.  And there is something to be said for their impatience. I would love to see Rossini’s “La Donna del Lago,” which I’ve never experienced, or his “Le Siege de Corinthe,” which I last saw, for the first and only time, some 35 years ago. And then there is the lamentable tendency followed by many big houses to put on so-called warhorses like “Il Barbiere” (and “La Boheme” and “La Traviata”) in stupid, often tacky productions with inadequate casts while they lavish attention on works by Richard Wagner and stylish obscurities.

But “Il Barbiere” is a comic masterpiece, arguably the greatest in the opera literature, with arias and ensembles that even the opera illiterate recognize. And when a production of “Il Barbiere” is as scintillating as the Boston Lyric Opera’s, who’s to complain? Bring it back next year! Bring it back every year! (The company should expand its season so it can bring back hits from earlier seasons – the Met does it, the San Francisco Opera does it, La Scala does it. It’s not a disreputable practice.)

The production and the sets and costumes might have originated in other companies, which was a point of contention for another local opera company, recently defunct, but the stage direction by Doug Varone and the singing and acting of the attractive age-appropriate cast made the evening - I attended Wednesday, March 14 - seem as if the entire to-do was the opening night of a brand-new hit. (Alas, Il Barbiere’s opening night at Rome’s Teatro Argentina in 1816 was not so happy, the audience packed with partisans of Paisiello, an older composer who had set the text to music a generation before, whistled throughout the entire work – it sounds sort of like a face-off between the followers of two rappers, without the gunfire.)

Rossini based his opera on a big hit of a still earlier generation, the first play of Beaumarchais’s famous trilogy that traces the courtship and disenchantment between the Count Almaviva and Rosina, the ward of the lecherous Dr. Bartolo, who is deluded that she will marry him. Thirty years earlier Mozart had turned Beaumarchais’s second play into “The Marriage of Figaro,” a significantly weightier comedy. It’s hard to believe that Mozart’s sad and dignified Countess, stoic in the face of her husband’s infidelities, is the same woman as the playfully flirtatious girl Rossini created. (I guess that’s what marriage will do.)

At the heart of both works, however, is the barber Figaro, who schemes to bring the two lovers together. A charmer, a self-promoter, a gracious liar, a hustler, a braggart – his “Largo al Factotum” (the famous “Figaro! Figaro! Figaro!”) is a series of self-aggrandizing boasts – he represents the bourgeoisie that will eventually take the aristocracy’s place and power. A free agent, he sells his services to those that need them. He is neither indentured nor in debt. And he is confident that he will move up in the social order. In both works, he outsmarts his pal the Count at every turn, and the Count, no dummy, acknowledges Figaro’s intellectual and creative superiority and follows his suggestions. Beaumarchais wrote his plays in the days leading to the French Revolution, and his works were seen then as seditionary. Mozart was brave to adapt one as an opera, but by Rossini’s reactionary time, a year after the Congress of Vienna had created a New World Order, abrogating most of the Revolution’s progressive advances, Beaumarchais’s work probably seemed merely a good comic story that might make a better comic opera.

The key to The Barber is its lightness, its insouciance. This is not Gotterdamerung, and it doesn’t require, never mind demand, deconstruction. Rosina is not made out to be Bartolo’s illegitimate child caught in an incestuous web, thank god. Rossini created fully three-dimensional characters that exist on their own terms on the surface of the quickly paced work, and any cast and production team that illuminates that surface, paying attention to its cues, has its work half done for it.

Fortunately, the production has a light touch. The sets by Allen Moyer, borrowed from the Minnesota Opera, are charming. During the overture, we see through a scrim a tilted portrait of Rossini, admittedly a cliché, and, more interestingly, a suspended puppet theater, which hints that the roots of the opera, with its stock characters, are in the venerable Italian commedia dell’arte tradition. The action takes place in a neo-classical theater proscenium set on the stage that suggests that we might be attending opening night at the Teatro Argentina. (The anachronistic footlights are put to good use in the second act.) Scenes, defined by colorful backdrops, are quickly changed, the square outside Dr. Bartolo’s house morphing into Rosina’s frilly boudoir, which in turn becomes the palace’s neo-classical salon, the doctor’s library and the boudoir again. James Scott’s costumes are so complementary that it is a surprise to read that they come from the Washington National Opera.

Stage director Varone’s touch is not only light but fleet, revealing his roots as a choreographer. He puts everyone in motion if there is a purpose for it. When the Count hires a band to serenade Rosina from the square outside the house where she is sequestered, he sends a quartet of them gamboling across the stage like the provincial yokels they are. When, in the second act, Rosina, Figaro and the Count sing the infectious “buona sera” trio in an attempt to get rid of the clueless Don Basilio, they stand in a line and make the same gestures, choreographed to the music, of ushering him out that only adds to the amusement inherent in the music. After Almaviva reveals himself to be the Count not the student Lindoro and he and Rosina profess their love in the foreground, Figaro sits at her vanity, applying powder to his face and checking himself out in a hand-held mirror. Etc. Varone failed to make the most of the brief storm scene, however, which took too long to get started and was over too soon.

David Angus proved his mettle leading a lithe orchestra alert to the joy within Rossini’s music. After listening to fleeter performances of period music by Roger Norrington and others, however, I found some of his tempi a little sluggish. The overture, for instance, should fly. It moved along nicely, but it never really escaped gravity. More importantly, Angus found the pulse of the music and never let it go. Rossini’s music breathes like a living beast, and when singers and orchestra are in sync the effect is almost rock n’ roll.

The cast was for the most part superlative.

Top honors go to Sarah Coburn’s Rosina. A soprano in a role written for a mezzo, she made full-voiced beautiful sound throughout her range with ringing top notes to rich earthy low notes. Her coloratura was apparently effortless and her ornamentations modest but original – she nailed the aria “una voce poco fa,” in which she expresses her infatutation with the voice she heard serenading her, the most famous number after “Largo al Factotum.” She acted as buoyantly as her role demanded. One hopes we get to hear her again on stage here soon.

The two major male singers, tenor John Tessier as Count Almaviva and baritone Jonathan Beyer as Figaro were also excellent. Tessier was as sweet-voiced as his voice type requires, especially in his two serenades, but he was also a vigorous and adept partner in duets and ensembles. Beyer came across as a big boy having the time of his life. His joy was contagious, and his physical acting matched his agile singing. The only disappointment was that in the patter duets, they were not as sharp as they should have been. Boston opera-goers who remember Donald Gramm and Alan Titus dueling vocally in Donizetti’s “Don Pasquale,” another operatic comedy that seems never to go out of favor, know what I mean. As they challenged each other to sing faster and louder, as the score demanded, audience members were practically jumping out of their seats. The duets between Tessier and Beyer were fun but more sedate.

Bass Steven Condy stole almost every scene in which he got to bluster and express his outrage over his thwarted plans to marry his ward. A man nearly as wide as he was tall – at least as he was dressed for his role – he was a classic comic foil, the old man who lusts after a younger mate for her youth and, in this case, money. In Act II, when he grows disenchanted with the new music Rosina is singing for her music teacher, he insists on singing a song from his era, by one Cafferelli, a celebrated castrato, even if Rossini spells his name incorrectly. (According to Wikipedia, it’s Caffarelli.) His imitation of a castrato, with breaks and a final desperate descent into his own vocal register, is hilarious.

Local boy bass-baritone David Cushing as Don Basilio, the music master and general right-hand man to the good doctor, sang well and showed a flair for comic acting. However, he didn’t quite have what it takes to put over the great aria “la callunia,” which suggests that calumny – slander - is the best way to ruin someone’s reputation. The most effective singers of this aria have deeper voices and often many years on Cushing. It is an old man’s aria. Cushing will likely grow into it.

Of the singers with something important to sing, Judith Christin as Dr. Bartolo’s maid Berta was a disappointment. She had the girth and the moxie to play the insolent maid, but she lacked the voice to make much of her single aria, which appears late in Act II. In it, she complains of her lack of a love life, after which she goes into a closet with her lackey, Ambrogio, a silent role portrayed memorably by the stump-shouldered Domenico Mastrototaro, who emerges walking straight-backed and erect for the first time in the opera. Another good example of Varone’s direction.

I was initially disappointed by BLO’s announcement of its upcoming season, which is dominated by “warhorses,” but if it can bring the same spirit to Puccini’s “Madama Butterfly,” Mozart’s “Cosi fan tutte,” and Wagner’s “The Flying Dutchman” that it has to “Il Barbiere di Siviglia,” then I’ll have no complaints.