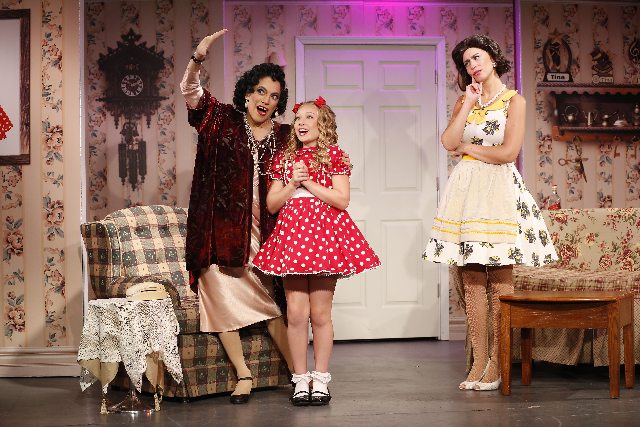 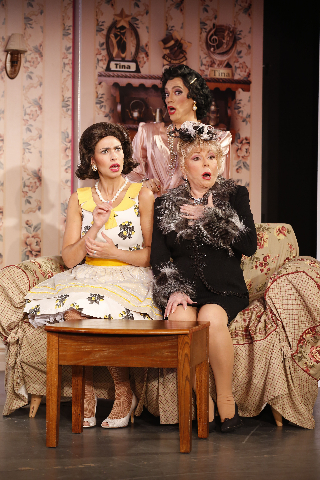 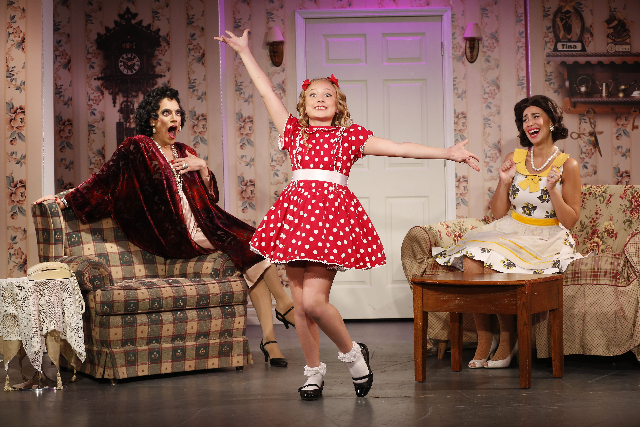 To say that I loved the musical Ruthless, currently playing at St. Luke’s Theatre in New York City through June 18th (after several extensions by popular demand) is a gross understatement. More accurately put, I loved, loved, loved Ruthless. In fact, after seeing the play two times, thoughts of marrying the musical as well as its delightful cast of seven came to mind. I was sure that such a union would supply me with a lifetime of high octane fun.

Of course, there is a back story to the beginnings of my love affair. On January 23, the day of the Great Blizzard here in New York, just as a lady friend and I arrived midtown at the Samuel J. Friedman Theater to pick up matinee press tickets to see My Mother’s Brief Affair, all Broadway theatres by order of the mayor went black. With the buses not running, all cars (think taxis too) ordered off the streets, and the subways rumored to stop running at 4 PM there was worry as to how hordes of theatergoers would get back home.

Stranded in mid-Manhattan, and not wanting to make a reverse trip home after bravely trekking uptown through thick and thin, we decided to rescue the day by making our way over to Joe Allen’s the famed theatrical hangout on Restaurant Row for lunch. Just as we arrived, a sign saying Restaurant Closed was being posted on the front door. The other restaurants on the block which we also checked out had already closed.

As luck would have it, on our way home, a large and lively sign, outside of  St. Luke’s Theatre on West 46th Street, trumpeting the virtues of Ruthless, a play I had not seen but had heard good things about, caught my eye. Blizzard aside, being a small and intimate Off-Broadway theatre, the thought occurred to me – you know, Garland , Rooney, and a Barn – that just perhaps the Ruthless actors, most likely already in costume, would not abandon the stage so easily. Blessedly so, as the saying goes, the show must go on. And on it went. The rest is history.

The cornucopian plot of Ruthless while being a simple spoof on show business has more twists and turns than a pretzel. Just when you think you know what is happening, what you are seeing, and where it is going, revelation after revelation, all coming out of left field, take us, oh so willingly, in another head-swirling direction to the land where lying, deceit, hidden identities, along with murder, mystery, and mayhem, all served up with song, dance, and a great many laughs, reign supreme.

While much of the action is predictable, if not inevitable – that’s what spoofs are all about – the story of Ruthless is like a favorite aunt who you know everything that she is going to say and do, but still you never tire of watching her do and say it.

You cannot wait to see her again which is why I attended a second performance of the play. I just had to see if the musical was as wonderful as I thought it was the first time around, or was it just a matter of finding a safe harbor during the Blizzard that colored my experience. I am happy to announce that the musical was even better the second time around.

From beginning to end Ruthless is filled with a baby bevy of amazingly talented show-stopping, -star-turning actors, each inhabiting a larger than life character. You get 8-year-old Tina Denmark, a devious, self-centered, rising child star (realized sensationally by 11-year-old 6th grader Tori Murray), Judy Denmark (the golden-voiced Kim Maresca) her seemingly innocent all-American mother who has thoughts of stardom for herself, and Lita Encore, a bitchy Hedda Hopper-like gossip columnist, played to the hilt by Rita McKenzie. Adding a cherry to the top of this delicious sundae is Sylvia St. Croix, a conniving over-the-top, would-be agent acted to several fare-thee-wells by Paul Pecorino in drag.

Also thriving in this mix is Miss Thorn (Andrea McCullough), an alcoholic acting teacher, formerly a failed actress who encourages Tina to audition for the school play, Pippi in Tahiti, and Louise Lerman (Jennifer Diamond) who, with rich parents with money that talks, is Tina’s chief competition for the lead role of Pippi. Diamond also doubles as Eve Allabout, a character who is somewhat patiently waiting in the wings for her chance to dethrone Judy Denmark.

If you think that you recognize these Ruthless characters, and they all are ruthless bar none, well you have, for playwright Joel Paley has cleverly peppered the musical throughout with scenes, as well as lines, taken from Gypsy, Sunset Boulevard, All About Eve, and The Bad Seed. Talk about the layers of an onion.

I love prologues, and the play begins with one delivered by Sylvia St. Croix’s with all the dramatic intensity of Gloria Swanson in Sunset Boulevard. Ravishingly dressed by costume designer Nina Vartanian, Croix, with more poses than a slew of runway models, kidnaps the audience from the very beginning and never lets us go. Looking us straight in the eye she challengingly asks in a theatrical stage voice that could stop a bullet “where does talent come from? Is it a product of one’s environment - something you pick up off the street? Or is talent something you’re born with? Something passed down from generation to generation - something in the blood. Meet Judy Demark.”

As the curtain parts we see Judy Denmark, an all-American looking housewife, with a husband we never see but only hear about running around her apartment. Dressed and coifed, on a set to match – both are straight out of the '50s – Denmark is busy answering call after call from people praising her daughter Tina. Setting the comedic tone of the play with each call Denmark liltingly answers, in a melodious sing-song voice “This is Tina’s mother.”

It seems that Tina, as her mother tells a pastor who is calling to remind Tina that she has a choir solo coming up Sunday, “Tina is good at everything and I’m grateful every day. Everyone agrees she’s positively heaven sent. My kid’s the perfect eight-year-old. Yes, she’s enthralling.” With a heavenly set of pipes that could reach the third balcony of a Broadway house, Maresca sings "Tina’s Mother" the first of an enchanting cavalcade of delightfully delivered songs.

No sooner does Denmark finish singing, in comes the ambitiously plotting Tina who was in the garage breaking in new tap shoes. After saying hello to her mother and St. Croix, who after seeing Tina perform at the Rolling Hills Twilight Home for The Elderly, unexpectedly appears at the apartment, Tina, in a flurry of tap-dancing steps that ends with her on top of a table, introduces herself by belting "Born to Entertain." She sings “Some girls like to cook and sew when I cook it’s in a show. I was born to entertain. Some girls prefer to help mom clean I’d rather learn a dance routine. I was born to entertain.”

While Kim Maresca, Paul Pecorino and newcomer Tori Murray are the main leads, all of the featured players are simply wonderful. Show biz veteran Rita McKenzie – she co-created the award winning Ethel Merman’s Broadway, the longest running one-woman show in theatrical history – ironically blasting "I Hate Musicals" brings down the house as she sings “…I want to see a play with no singing and dancing to get in the way. Theatre is language and that should be all. Music belongs at the Carnegie Hall. Not a reason on earth as far as I know to write, mount and open a musical show.”

Equally riveting is Andrea McCullough’s rendition of "Teaching Third Grade" where she bemoans the fact that her dream of being an actress fell flat on its face.

No longer on meds, as she tells us, she sings her story. “Sure, I went to New York to be an overnight sensation. More than a face I was winning combination of talent and grace. I wish I had mace. My purse was nabbed. My ass was grabbed behind Penn Station now I’m back lord at the blackboard.

Like a roller coaster with laughs galore, Ruthless which first opened Off Broadway 22 years ago and won the Drama Desk Award for Best Lyrics and the Outer Critics Circle Award for Best Off Broadway Musical, unfolds at breakneck speed. Its hour and forty five minutes, seeming like one, just zipped by. I could have sat another hour or two.

And why not! The talent is there, the story is fun, the price is right, the musical is uplifting, and the intimacy of this small theatrical space is such that one gets the distinct feeling that you are attending “ a just for you” private performance. At this very moment I am craving a third viewing. I am positively sure that the third time, as the saying goes, will be a charm.