A Rite at Williams ’62 Center 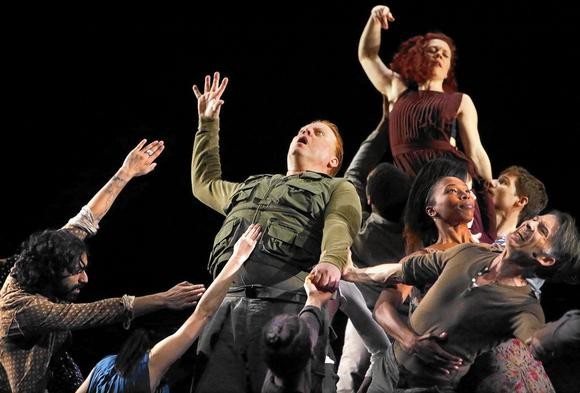 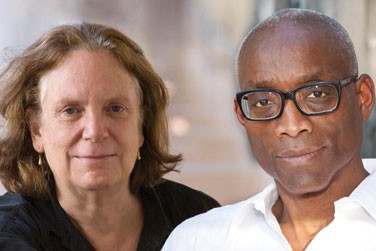 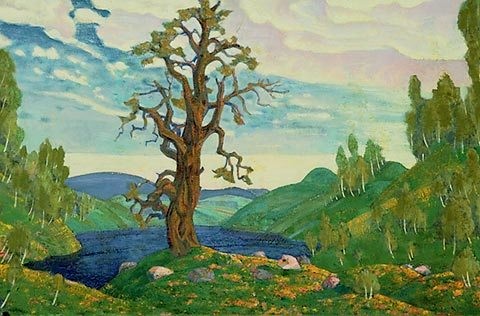 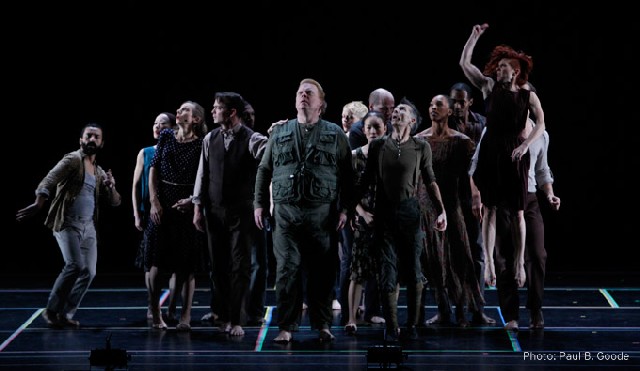 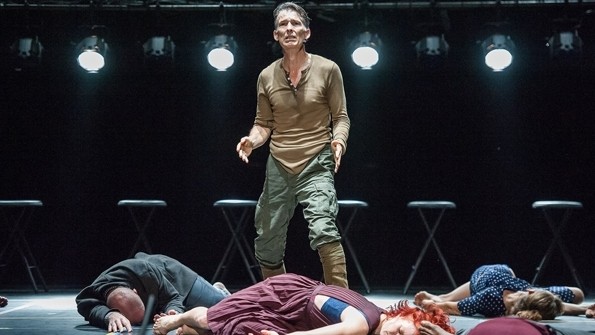 The Walker/ Soldier standing over a panorama of machine gunned bodies. 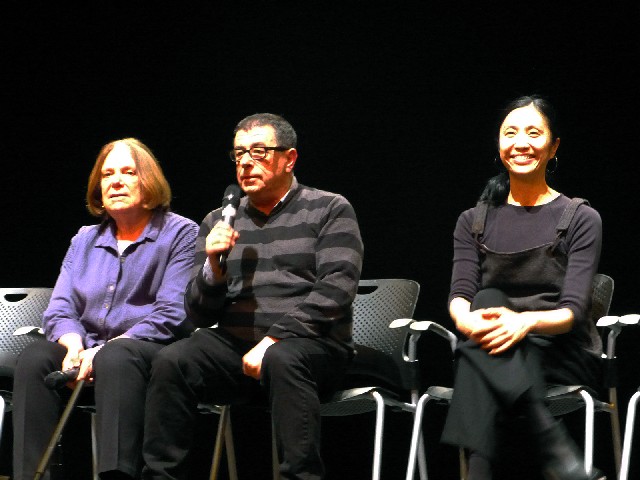 Anne Bogart, left, Williams moderator, and Janet Wong in a post performance discussion of A Rite. 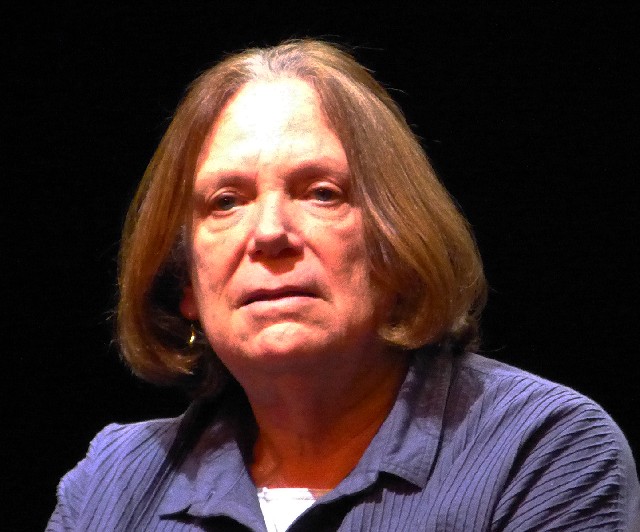 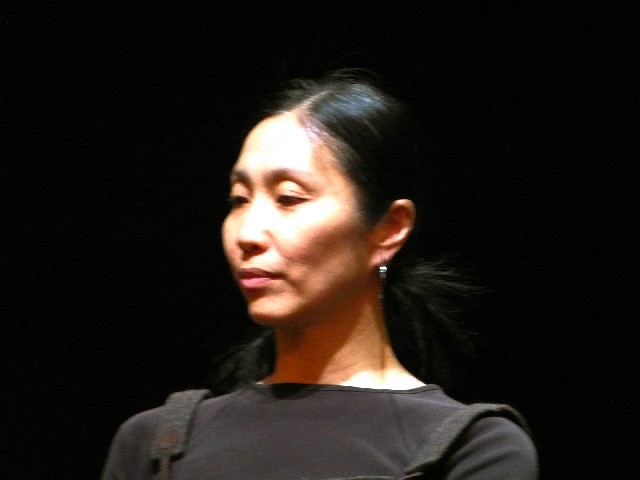 Janet Wong was challenged in creating A Rite.

Famously audiences rioted when The Rite of Spring (French: Le Sacre du printemps, Russian: «Ð’ÐµÑÐ½Ð° ÑÐ²ÑÑ‰ÐµÐ½Ð½Ð°Ñ», Vesna svyashchennaya) was first performed in Paris in 1913.The music of Igor Stravinsky with choreography by Vaslav Nijinski for Sergei Diaghilev’s Ballets Russes company was so shocking that after a few performances later in London it was dropped from stage performances but retained as a symphonic work.

The documentary materials including set and costume designs by the Russian artist Nicholas Roerich were long considered lost. Through archival research and a reconstruction of surviving sketches of the dancers and their positions a near to authentic version was performed by the Joffrey Ballet in the 1980s. That project and a complete performance was presented by PBS in its Dance in American series.

Because the work immediately ceased as a ballet that has favored multiple interpretations of what has proved to be the most iconic work of music and dance in the 20th century. The recent 100th anniversary resulted in festivals based on the galvanic and visceral masterpiece.
This led to a commission for a collaboration between the Bill T. Jones/ Arne Zane dance company and the Tadashi Suzuki method Siti theatre company directed by Anne Bogart.

Last night a Berkshire audience was stunned and thrilled to see the work "A Rite" performed at the ’62 Center of Williams College.

We saw "Steel Hammer" a piece based on the folk legend of John Henry during the Humana Festival in Louisville. Attending with the theatre group, ATCA,  there were mixed responses among the assembled critics last year. Its combination of music, movement and elements of narrative proved to be off putting as vocally expressed by some colleagues.

Having seen a lot of dance we were more responsive to the work which proved to be the most memorable highlight of the renowned theatre festival. Perhaps a bit naively I commented that the piece made me think of Jones/Zane. By then they had already collaborated on "A Rite."

Similarly in our encounters with the Jones/ Zane company at Jacob’s Pillow and Mass MoCA we found the direction of the company ever more oriented to drama and narrative.

The resultant collaboration has resulted in remarkable synergy. Indeed, by calling on the strength and invention of both experimental companies, the whole proved to be greater than the sum of its parts.

The challenge, obviously, is how to refresh a dance with new ideas and energy based on one of the most powerful and emotionally overwhelming compositions ever written. In taking on this monument many have tried but few have reached its daunting summit.

The approach we saw broke down or deconstructed the work presenting slices or vignettes of the music and sensational ensemble work interspersed with the “theatrical” element of characters including a walker or PTSD survivor of WWI, a ditsy musicologist analyzing the work and its history, as well as a theorist of the space/ time continuum.

These narrative elements locate the work into its shocking relevance in 1913 on the cusp of WW1. The sacrifice of a maiden who dances herself to death while surrounded by a circle of movement and percussive sound was an apt metaphor for the impending disasters of war. That would morph into reality with the assassination in Sarajevo and resultant Guns of August.

Among artists and intellectuals there was exploration of flattened space and a potential fourth dimension in the Cubism of Picasso and Braque or theories of Einstein. In their commitment to exploring pictorial space the artists referred to each other as Wilbur and Oliver evoking  the experiments in flight by the Wright Brothers.

It is not surprising that musings over weapons of mass destruction and abuses of technology pervade this new interpretation of "A Rite." The Walker evokes the clatter of machine guns that literally mowed down waves of soldiers charging over Flanders fields. It was the war that introduced the submarine, tank, poison gas, and planes strafing and bombing the trenches.

With its basis in Suzuki method training movement is a signifier of Siti Company. The “actors” more than held their own with the “dancers.” That’s saying a lot for a piece with intricate and physically demanding choreography. Add to that selling the narrative elements. There is another challenge as from time to time the company vocalizes the music. It starts intimately with a single voice simulating the bass line with layers upon layers added until we hear familiar elements of the score.

While treated as fragments this inventive work is fairly faithful to the sequencing of the original two act piece. During the talk back the company humorously revealed that during the initial phase of the rehearsals they met in a dorm room, removed their clothes and improvised while listening to the complete score. With nervous laughter they described the bonding and confidence that resulted. They continued to improvise as the dance took shape with enormous difficulty.

Janet Wong who was the point person of the Jones/ Zane company described going into the premiere with no set second act. There were scrambles up to the last minute. Wong conveyed that it was the most stressful experience of her career. Ellen Lauren who performs as the comical musicologist described many hours of interviews and transcriptions with a renowned Stravinsky scholar. Bogart added how it took considerable time and effort to extract a script from those hours of text. Similar intensive research went into extracting aspects of science, philosophy and poetry based on the writing of Brian Greene and the Japanese poet Shuntaro Tanikawa.

There were times when the performance was familiar and reassuring. Early on the ritual killing of the maiden was evoked with movements that channeled the historic Joffrey reconstruction. It was entirely right and respectful even with new inventions.

Then that sense of the comfortable and familiar was disrupted. We were jolted into viewing a work about a work. There was that juxtaposition of what we know and bring to the piece and what we don’t know as presented by the passionate and intelligent collaborators.

That approach quickly becomes apparent when The Walker (Will Bond) begins to describe the wounds he has endured in the trenches. In his hand he clicks on a tape recorder playing Sacre. We hear the music but it is filtered and reduced. There is an emphasis on the artificiality of hearing a mechanical device. It is more about the music as a bookmark or reference for the actor than an actual experience.

There is a lot of breaking of the fourth wall. Occasionally the dancers/ actors ask each other if they are aware of the audience. It’s an obvious device but underscores the cubism and fragmentation of the work that relates to the fracturing of the historical moment of the inspiration and impact of the piece. One may only image the heady mix of radical art, science and dissent on the cusp of impending catastrophe.

As a student put it during the lively and informative Q&A how to explain what was once so radical, evoking riots, and now is approached as iconic and historical. For me, as performed last night, the ballet is still radical. In this version, if possible, even more so. The audience rose, not to hurl objects and insults as was the case in 1913, but today to praise and appreciate.

A relatively new member of the Jones/ Zane company told us that audiences still riot when confronted with radical dance. Wong elaborated that there are indeed protests, like those for a guest Russian conductor and Putin supporter at the Met, but they are about political views and not dissent with the performances.

During the radical 1960s and 1970s as a critic I endured my share of riots at the Newport Jazz Festival, Sly and the Family Stone, and following a concert by Janis Joplin (her last) at Harvard Stadium. After the Joplin concert the kids trashed Harvard Square. But that was nothing new back then.

Not to say that I am romantic and nostalgic about riots. People get hurt. But it is a palpable part of the history of Starvinsky’s Rite.

Last night, sad to say, the students didn’t trash Williamstown. If anything they were a bit too tame and polite. Perhaps considering the tuition and debt racking up they are afraid of revolution.

For this old rad the performance last night was remarkable. It was my best ever experience of these two great companies.

Too bad about the apathy. Burn baby burn.