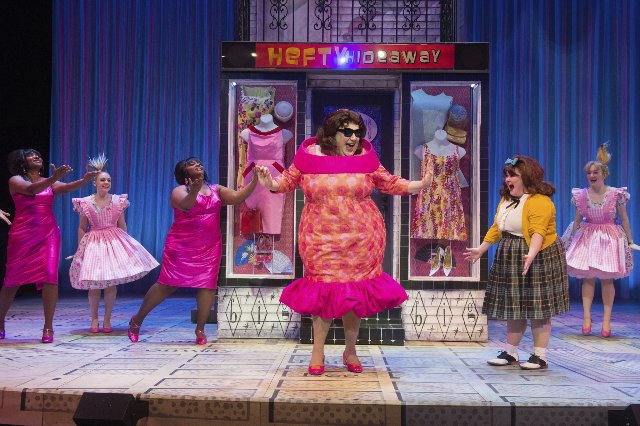 Daniel T. Parker as Edna and Katy Geraghty as Tracy.

It had me from “Good morning, Baltimore,” deejay Corny Collins’ opening song. Hairspray is John Waters’ homage to his hometown; his recognition of the place that rock and roll took in the lives of many teens in the early 1960s; and most significantly, his call for inclusion. Oregon Shakes offers an outstanding production of this uplifting, heartfelt musical.

The action of the musical takes place in 1962 and centers around Baltimore’s teenage obsession with the television program The Corny Collins Show, a stand-in for an actual Baltimore production of the day, The Buddy Deane Show. Clearly, a riff on nearby Philadelphia’s American Bandstand, the earliest version of that show broadcast locally in 1952, before rock and roll, and nationally in 1957 with Dick Clark as the host.

Rock and roll music, considered pernicious by many adults, was accompanied by the dancing of teenagers. But a winning formula, both on American Bandstand and replicated in Hairspray, largely alleviated parents’ fears. Strict rules of selection and conduct applied. Although some called rock and roll race music, the show was segregated – whites only. Well groomed, well dressed, attractive teens appeared, and behavior was closely governed to avoid anything salacious or aggressive. Plus, they had a chaperon!

Against this backdrop, Tracy Turnblad vies to become a member of “The Council,” the kids invited to appear on Hairspray’s Corny Collins Show. Although considerably overweight, she not only makes it onto the show, but she attracts the attention of one of the alpha males in The Council. Blowing by her personal obstacle, Tracy’s other goal is altruistic. “Negro Day” is held once a month. Since she learned the dancing moves that gained Corny Collins’ attention from a black teen, she begins the fight to make every day Negro Day – an integrated dance show.

The proceedings are full of energetic rock/pop music – none that would make the Top 10, but infectiously bouncy. There is also abundant humor, and numerous characters that you care about and others that you wish would disappear.

One criticism of the script could be the abundance of cardboard characters. Most significant characters evidence consistent behavior and can be easily categorized as good or bad. One exception is the heartthrob Link Larkin, who wavers when considering to support every day Negro Day or not. Another weakness, to anyone who really thinks that Hairspray should have more complex literary value, is that impediments are so easily hurdled. But, so what!

Adding to the theme of inclusion, Waters cast Divine (a crossdressing male) as Edna Turnblad, Tracy’s mother, in the original film.  Subsequently, John Travolta appeared in the movie musical, and Daniel T. Parker plays her in this production. This is no doubt the writer’s call for gender preference inclusion.

Katy Geraghty is the archetype Tracy with a fine singing voice, good dancing skills, and a bright personality. The supporting cast meets the call with great skill. The most poignant moment in the play is owned by Greta Oglesby’s Motormouth Maybelle, who, among other things, is the host of Negro Day. It’s hard to know how much to attribute to the play’s 11th hour song of hope “I Know Where I’ve Been” and how much to her powerful styling, but Oglesby received a rare, spontaneous standing ovation on opening night. The well-mounted production uses the full scope of the stage and the versatile set by Nina Ball.

Hairspray challenges prejudices against women who lack an idealized body type and pushes for racial integration and acceptance of non-binary genders. It slyly and adroitly conveys its message even to conservative audiences through an entertaining package of sympathetic characters and shared enjoyment.

Hairspray, based on John Waters film with book by Mark O’Donnell and Thomas Meehan, music by Marc Shaiman, and lyrics by Scott Wittman and Marc Shaiman, is produced by Oregon Shakespeare Festival and plays in repertory in its Angus Bowmer Theatre through October 27, 2019.

Posted couresty of For All Events.