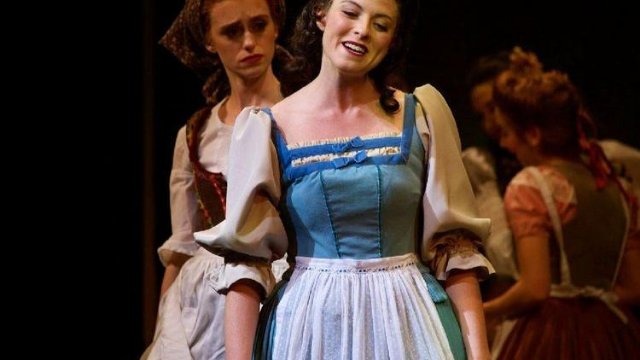 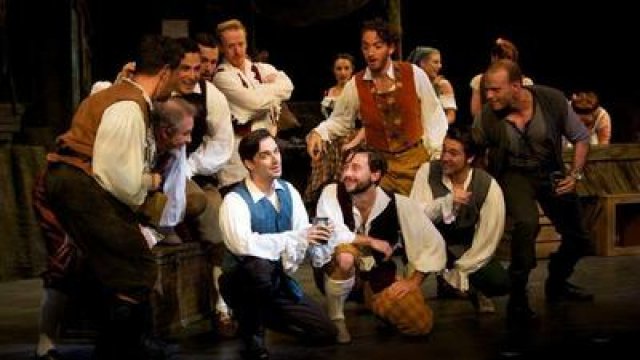 (Photo by Amy Pasquantonio) Charlie (Adam Marchant) regales townsfolk with talk about his upcoming wedding in a scene from Brigadoon. 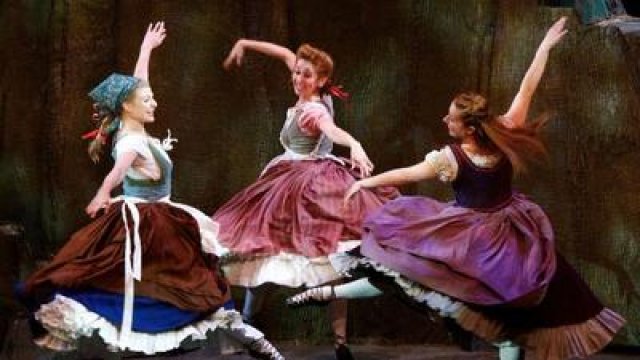 (Photo by Amy Pasquantonio) Scottish lasses dance to celebrate a wedding in a scene from Brigadoon. 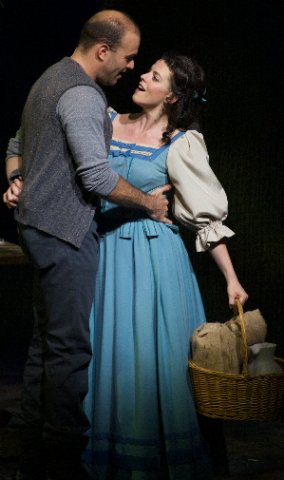 On the Playbill’s cover, gold, upper case letters spell out the title of the enchanting musical playing at The Wick Theatre and Costume Museum through April 8.

If the gold coloring and capitalization are coincidence, they’re appropriately symbolic.

That’s because we need a “Brigadoon” these days. It’s difficult not to yearn for such a golden place, where love, cooperation and peace reign.

So thank you to The Wick’s staff for whisking us to the Highlands of Scotland and away from our ill-infested world.

Out of the Scottish Highlands’ mist, a magical, mysterious village called Brigadoon appears for one day, once every century. The Wick has brought this mystical village to life in a production that achieves mixed results.

The strengths of Alan Jay Lerner and Frederick Loewe’s 1947 classic include the charm and enchantment of its fantasy.

Brigadoon's upbeat, humorous and tender story and the yearning, romantic ballads are practically irresistible. The tale and its music dare us to dismiss this show as too farfetched, even by musical theater standards.

We believe because it’s impossible not to identify with the likeable characters populating the show and singing Lerner and Loewe’s lush music.

Faith is difficult, if not impossible, for Jeff Douglas. He’s a cynical New Yorker accompanying Tommy Albright on a hunting trip to Scotland. Along the way, they get lost. But at least Albright gains reaffirmation of his intuition that, in essence, “there can be miracles if you believe,” to borrow a phrase from The Prince of Egypt.

If anyone were to predict that Lerner and Loewe would create such a successful musical, they’d probably be accused of dreaming. The pair’s first three shows were not nearly as successful. But the songwriting duo forged on. They’ve given us such shows as My Fair Lady, Paint Your Wagon and Camelot. These musicals’ creation came during or soon after the “Golden Age” of the American Musical (c. 1943-1959). It began with Rodgers and Hammerstein’s Oklahoma, considered the first musical to seamlessly integrate story, song and dance into a cohesive whole.

For instance, more than one romance plays out. Albright almost instantly falls for the equally earnest and lovely Fiona MacLaren. A secondary pair, Douglas and the silly Meg Brockie, comprise a more comical couple.

The performers playing these and other characters largely shine. Unfortunately, during the reviewed performance, the sound system didn’t always cooperate. But when you can hear the performers, clad in Derek Lockwood’s appealing period costumes, it’s hard not to marvel at their skills.

Skilled, award-winning actor Wayne LeGette, well-known to South Florida audiences, nails Douglas’ cynical attitude. During at least one scene, he stands apart from Tommy and the actors playing the villagers. He folds his arms and arches an eyebrow or lowers both in a cynical expression. His voice betrays just the right sardonic tone in a convincing performance blessed with spontaneity.

Oddly, director Jeffrey B. Moss has LeGette singing the prologue solo. In the original cast recording, a chorus sings “Once in the Highlands,” adding to the mystique of Brigadoon. The sound is rich, but it’s a bit thin with one actor singing the prologue.

For Albright, singing is necessary. As is the case quite often in musical theater, Words alone aren’t enough for him to express emotions.

A heartfelt Matthew Taylor, with slanted eyebrows and gleaming eyes, invests his character with a touching sincerity. He has a strong, almost urgent desire to marry Fiona (Lauren Weinberg).

The pair move us with heartfelt renditions of the romantic standards “The Heather on the Hill” and “Almost Like Being in Love.”

Weinberg, who brings an ethereal quality to Fiona, possesses a honeyed, expressive singing voice. It is clear and a joy to listen to.

Mychal Phillips is a hoot as the scatterbrained Meg Brockie. She's a milkmaid strongly desiring a husband. Phillips nails Meg’s silly personality. But she also brings humanity, a swagger and pride to the role through her solo, “The Love of My Life.” Meanwhile, Phillips shows off her comic and vocal ability by nailing the tongue-twisting, patter song-like number “My Mother’s Weddin’ Day.”

Strong company numbers include the cast’s rendition of “Down on MacConnachy Square.” It starts slowly and builds to a rousing, upbeat and welcoming song.

By contrast, the title song sounds just as haunting and mysterious as it should, with the actors’ voices melding into one.

This talented company of performers also includes Oscar Cheda. He is strong as the old schoolmaster Mr. Lundie, imbuing him with the right combination of wisdom, understanding and honesty. Picture Our Town’s Stage Manager with a Scottish accent.

Director Moss places equal emphasis on the tender, humorous and somber moments. The pacing could use work. Some moments fly by so that the desired emotional effect is lost. For instance, at the end, the village awakens out of the mist too quickly and with little fanfare after Albright and Douglas return to the spot where Brigadoon stood. There’s not enough time for Albright to behold the miracle of the village coming back to life early.

Fortunately, timing isn't a widespread problem. At one point, for example, we watch as mist slowly starts to rise from the stage. The day is ending and the lovely and loving Fiona, along with her beloved Brigadoon community, is slowly disappearing into the mist before Albright.

We might know how the story ends. But we still find ourselves hoping that this peaceful, loving, Camelot-like community will once again re-appear.