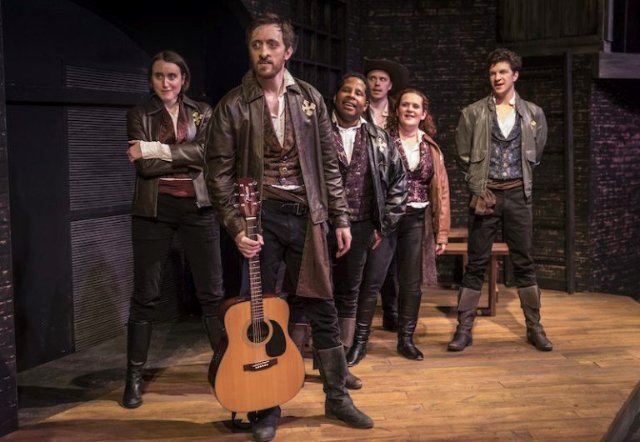 Michael B. Woods as Cyrano (front). Photo by Liz Lauren.

Cyrano, the new adaptation of Edmund Rostand’s poetic Cyrano de Bergerac, by Michael Hollinger and Aaron Posner, is lean and hilarious. The man with the famously large nose is played by Michael B. Woods, who makes the most of the swordsman’s persona and his poetry. Director Steve O’Connell choreographs Boho Theatre’s cast of nine in this story of unrequited love, insults and sword fights, and the Thirty Years War.

The play benefits by the adapters’ retention of much of Rostand’s language, including Cyrano’s swashbuckling oratory. That includes the cascade of proboscis insults that Cyrano hurls at an actor who lacks the creative talent to insult Cyrano properly himself. A sample:

Aggressive: “Sir, if I had such a nose, I’d amputate it!”
Friendly: “It must annoy you when it dips into your drink. You really should have a specially shaped goblet.”
Descriptive: “’Tis a rock, a peak, a cape, a peninsula!”
Curious: “What is the purpose of that large container? Do you keep your pens and ink in it?”
Gracious: “Oh, how you must love the birds! I see you’ve made them a nice perch for their tiny feet!”
Hostile: “When you enjoy your pipe and the smoke spouts from your nose, the neighbors must think the chimney’s on fire!”
Considerate: “When you stroll, keep your head bowed low, else head over heels you just might go!”

The classic story, which has been adapted often to stage and screen, stars Cyrano, an officer with the Gascony Guards, and known as a swordsman, poet and musician. He’s in love with his (second) cousin, the beautiful Roxane, sweetly played by Vahishta Vafadari. Because he believes he’s too ugly to even court the woman he loves, Cyrano pines for Roxane silently. She tells Cyrano she’s in love with Christian (Zach Livingston), a handsome new recruit, who’s not a silver-tongued orator. Roxane yearns for him to court her with beautiful words. Cyrano befriends Christian and offers to write the words that Christian can write and speak to Roxane. Thus is created a 17th century love triangle. Among their scenes is one in which Roxane listens to her Romeo from her balcony, one of Rostand’s literary allusions.

Other threads of the play concern the relationships among the theater performers in the opening, and among the guards and their preparation for war. The Hollinger-Posner script includes many funny anachronisms and jokey visuals. In one scene, Cyrano battles enemy soldiers (described as “100”—but actually seven) and defeats them with his swordwork. In the next scene, his friends sit on benches with bags of popcorn to hear him tell the tale of his victory.

In the final scenes, it’s 15 years after the war, and Roxane is living in a convent, having lost her love to the war. Her old friend and cousin, Cyrano, visits her to bring news of the world. In the final scenes, Roxane learns to value language and character over a handsome face and figure.

Woods is a Second City alum and has a knack for playing outrageous characters. He was outstanding as Satan in Eclectic Full Contact Theatre’s production of The Last Days of Judas Iscariot by Stephen Adly Guirgis last year. Stephen Peebles also does a fine job as Cyrano’s captain, Le Bret, and Christina Gorman and Kristin Hammargren don britches and boots to play guards, an effective bit of cross-gender casting. Not all of the cast members seem comfortable with the language and more work is needed on their deliveries.

Kudos to Jon Beal for his excellent fight choreography, absolutely essential for the successful portrayal of several swordfights. Patrick Ham’s scenic design backs the stage with a broad brick exterior wall, balcony at one side and a large chandelier overhead. Christina Leinecke’s costumes are basic leatherlike uniforms for the male characters and colorful silk and lace for Roxane.

Rostand wrote Cyrano de Bergerac in 1897 in Paris and based his leading character on a French libertine of the same name. He is credited with introducing the word “panache” into English; the word then meant a plume or feather on a helmet or headdress. It has come to mean flamboyant self-confidence after Rostand’s namesake character. Posner is known for his fresh insights on classic works, including two Chekhov adaptations, Stupid Fucking Bird and Life Sucks, and two adaptations of novels by Chaim Potok, The Chosen and My Name Is Asher Lev. Hollinger, a Philadelphia playwright, is author of Under the Skin, Ghost-Writer, Opus, Tooth and Claw, Red Herring, Incorruptible, Tiny Island, and An Empty Plate in the Café Du Grand Boeuf.