The Goat, Or Who is Sylvia? 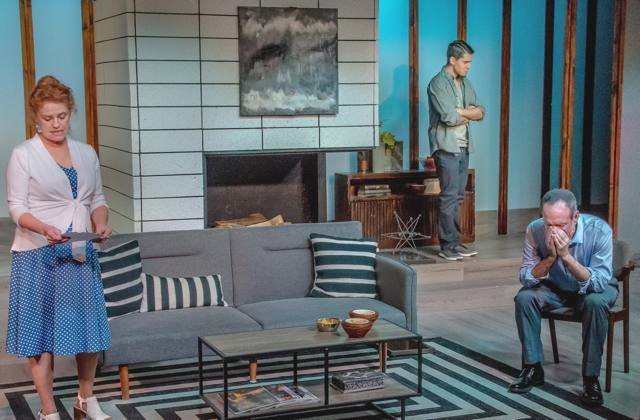 Coachella Valley Repertory Theatre (CV REP) of Rancho Mirage, CA, goes where few Regional theatres have dared to go over the years; producing one of America’s renowned playwright Edward Albee’s most controversial plays: “The Goat, or Who is Sylvia?”.

Edward Albee, is arguably, one of the five most influential American playwrights of the 20th century.  The other four being Eugene O’Neill, Arthur Miller, August Wilson, and Tennessee Williams.  His canon runs the gamut from one acts to three acts, with the 1962 iconic “Who’s Afraid of Virginia Woolf” as the jewel in his crown.

Albee, a three-time Pulitzer Prize-winner, debuted his highly controversial play “The Goat, Or Who is Sylvia?” on Broadway in 2002.  It went on to garner a Tony Award for Best Play, A Drama Desk Award for Outstanding Play, and was a finalist for the 2003 Pulitzer Prize for Drama.

Seventy years ago America lost its innocence. WW II ended.  Societal norms were morphing from conservative values into individual values and new paradigms.  American writers and playwrights delved into these new mores and explored those new territorial freedoms via the theatre. Albee was a new voice who dared to create characters and situations that challenged his audiences to question the nature and meaning of love.  In his tragicomedy “Sylvia”, he raises the question whether love and shame can coexist After all, who defines normal?  Who decides which behaviors are acceptable?  Is dysfunctionality the new normal?  These are large and complex issues to ponder in a changing 21st century America.

CV REP Artistic Director Ron Celona selected “Romance: Real or Imagined” as the theatre’s 2017/2018 season theme.  “The Goat, Or Who is Sylvia?”, falls enigmatically into both categories.  Joanne Gordon, who directed CV REP’s stunning production of Ayad Akhtar’s “Disgraced” last season, returns to helm Albee’s most controversial play.  40 years after his huge success with “Virginia Woolf”. He still delivers the goods.  Echoes of “Virginia Woolf” abound in “Sylvia”. But if Shakespeare could steal from the Greeks, then it’s okay for Albee to steal from himself.

The emotionally-charged story in short focuses on happily married, 50 year-old famed architect Martin Gray (a sensational Sean Smith in an understated, riveting performance) who reveal’s to his best friend of 40 years, Ross Tuttle (Arthur Hanket) that he has recently fallen in love … with a goat!  Martin’s wife, Stevie Gray, played by Sharon Sharth in an astonishing performance, and Billy Gray, their seventeen-year-old Gay son played, perhaps, a little too earnestly by Ian M. White, make up this terrific ensemble of professional Actors’ Equity performers.

Bestiality, is not normally a subject of discussion outside or inside one’s home, perhaps, with the exception of a licensed Veterinarian.  Ross, however, feels compelled to inform Stevie, via letter, of Martin’s sick, unacceptable, sexual fixation on a goat, setting off a volatile confrontation between Martin and Stevie that draws Billy into their now deeply fraught and damaged marriage.

Albee, in 2013 said to his critics of “Sylvia”, that his intent of the play was to make people “think afresh about whether or not all the values they hold are valid”.  When one views the breaking apart of this family, it’s a little like watching a train-wreck.  We’re fascinated yet horrified at the carnage at the same time.  Having said that, just as in real life there are indeed, comedy moments in this production too.  It took about 10 minutes for the opening night audience to realize that it’s okay to laugh sort of like gallows humor. When an audience becomes fully engaged, that’s when a cast begins to really ‘cook’ on stage.

There are four terrific, finely-judged performances in this play.  But, the performances of Sharon Sharth as Stevie and Sean Smith as Martin, are true tour de force star turns.  The play is performed without an intermission.  These two actors are on stage for almost the entire evening.  They’re emotionally ‘naked’ out there.  Their high-octane, intense, and highly nuanced performances drain them and the audience as well.  It’s a mesmerizing evening of theatre.  However, a note of caution at this point: This a powerful play about adult behavior and language for adults.  So, leave the kiddies at home.

Director Gordon leads the creative team of Emmy Award-winning Set Designer Jimmy Cuomo who cleverly makes excellent use of employing three levels to give the actors the feel of a real home and more space to create their magic.  Lighting design by Moira Wilkie Whitaker, allows lots of light source to appreciate the costumes designed by Julie Onken.  I especially liked the sound design by Kate Fechtig, and her creative use of music that plays under selective scenes to heighten or enhance the mood.  It’s a film convention alas, and rarely employed in stage dramas.  Pity, it really works in the skilled hands of a creative designer, especially in a venue the size of CV REP and their cozy 88 seats.