You for Me for You by Mia Chung 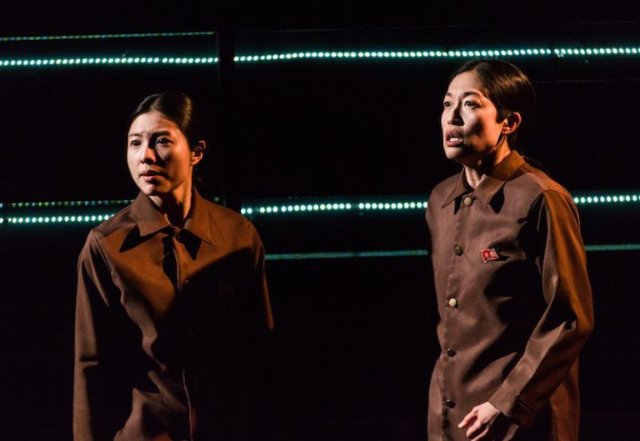 You for Me for You is a play that can tear at your heart and also remind you of current politics. (From which there is no escape.) Coincidentally, the president’s decision to meet with the North Korean leader came just as we were watching Mia Chung’s play about two North Korean sisters separated by politics. Set on the border between North and South Korea, as well as in both countries and in the United States, it’s the story of two women who try to escape the famine and repression in “the best nation in the world.” The Sideshow Theatre production, directed by Elly Green, is imaginative, poetic and touched with magical realism.

On their first attempt, the younger sister, Junhee (Jin Park) escapes and makes it to New York, where she works as a nurse. She is endlessly fascinated and puzzled by language, consumerism and baseball, and meets and forms a bond with an American boyfriend (Patrick Agada as the Man from the South). Minhee (Helen Joo Lee), the older sister, doesn’t make it through the “crossing,” where smugglers help escapees make their way across the north’s long border with China. She may be trapped but she’s not quite ready to leave. Minhee is very sick but determined to stay in her own country and say goodbye to her son, Jin, and husband, Yongsup. Her son was sent away to “re-education camp” and died there. Yongsup was a party functionary. In the scene where they meet he describes the horrible tortures inflicted on him because he strayed from the party.

Early in the play, the sisters argue at the border:

MINHEE: No, Junhee, we can’t—no, we’ll be second-class in the south.
JUNHEE: Here we’re fifth class! Below the government. Below the army. Below the city people. Below the men.

Green’s staging is dramatic, set on a red-and-black box-like set with a rear wall of constantly shifting louvers. The staging is designed by William Boles with lighting by Cat Wilson. Often two events take place on opposite sides of the stage at the same time and you fear you’re missing one by watching the other. The script is also sometimes confusing; there are times when you’re not sure where you are. Chung’s use of language is delightful, however. When Junhee gets to the U.S., bureaucrats and others she meets sound like they are speaking gobbledygook with some English words thrown in. As she gradually becomes more fluent, those exchanges become more intelligible too. An encounter with Liz (Katy Carolina Collins), who is handing out samples and coupons in a grocery store, is particularly funny (to us) and puzzling to Junhee.

Lee and Park are completely believable and sympathetic as the two sisters whose lives are ripped apart. Agada is a warm and appealing Man from the South (Alabama, it turns out). Green’s direction smoothly choreographs the many guises of Gordon Chow and John Lu throughout the play.

The playbill includes a helpful page of references about North Korea and leads off with this quote by Chung Hyun Shik, which describes Minhee’s view of the world from North Korea. “For the frog in the well, the circle of sky it can see is the world, and so the world appears to be small, round, and far away.”

Mia Chung’s other plays include Catch as Catch Can and This Exquisite Corpse. You for Me for You premiered at the Royal Court Theatre in London; its first U.S. production was in 2012 at Woolly Mammoth Theatre in Washington, DC. Chung is a graduate of Brown University with an MFA in playwriting.

You for Me for You by Sideshow Theatre Company continues at Victory Gardens’ Richard Christiansen Theater, 2433 N. Lincoln, through April 8. Tickets are $20-$30 for performances Thursday-Sunday.