Boston City Hall: Brutalism at 40 Plus

Contempt For An Outmoded Aesthetic 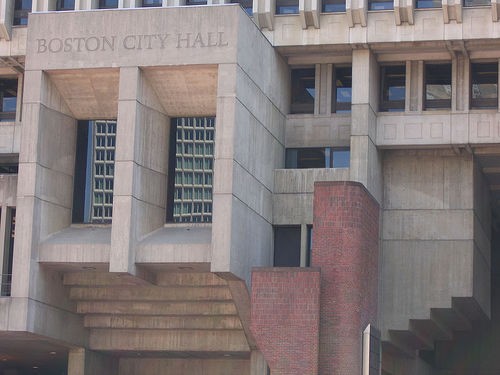 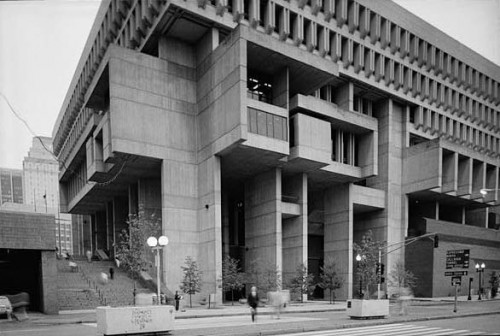 Back and South Side Facade from Congress Street 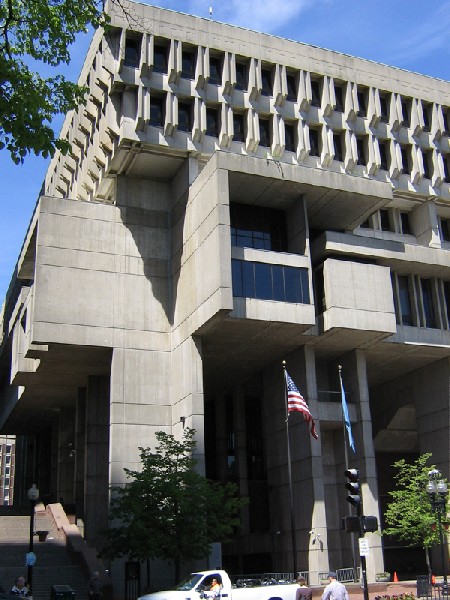 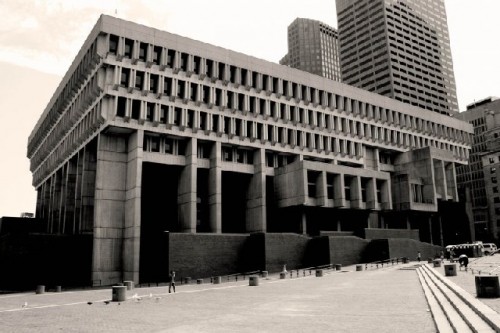 Front and North Side View From City Hall Plaza 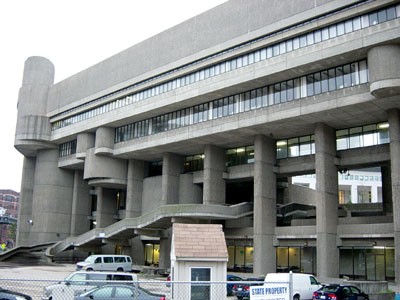 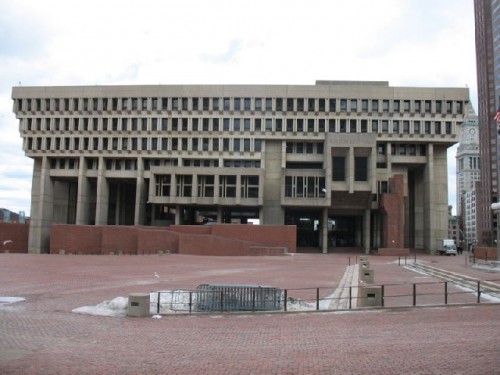 A crashing fall for a major Boston building's image can be seen from the early (over 40 years ago) near canonization of it as the jewel at Government Center to the utter contempt for the Boston City Hall by a majority of citizens. Boston City Hall was once ranked as 5th best buildings on world architectural lists.

In recent years, it is probably the most hated structure in Boston. Urban pollution and acid rain have not dealt well with the building's mostly concrete facade. Water stains from leaks also can be noticed. Boston's longtime mayor and building occupant, the Honorable Thomas Menino, wants to sell it or tear it down.

The winner of an international architectural competition, it was designed by the firm of Kallmann, McKinnell and Knowles in 1962. It was built in 1967 at the height of the Brutalist architectural style that flourished from the 1950's to the 70's. It was a part of the modernist movement.

English architects Peter and Alison Smithson coined the term Brutalist or Brutalism in 1954. It was taken from the French "béton brut" or raw concrete. This was a translation of the phrase used by architectural icon Le Corbusier to describe his favorite building material. The term was given further credence by architectural critic Reyner Banham in his 1966 book, The New Brutalism.

Noted architectural historian Ada Louise Huxtable felt that Boston City Hall had "a dignity and an openness that belied Boston's notoriously convoluted politics." Recently, she has expressed that the building has been particularly neglected and abused as well as being not well served by the politicians and bureaucrats that inhabit it. Quite alone among serious critics, Huxtable still admires the building.

Boston City Hall was conceived by its architects as having three distinct sections or zones. The first was the ceremonial section where great and often symbolic events could take place; the second was the retail piece where tax bills, parking tickets and fees could be paid; and third was where government work took place in offices. The facade of the building was suppose to abstractly speak to these three functions as well.

The citizens of Boston never really saw or understood this vision. With the introduction of electronic anti-crime guarded entrances since 9/11, the flow of citizens in and through the building is greatly hindered on the inside. In recent decades, ceremonial events are always held on City Hall Plaza outside. Maintenance of the exterior of the structure has been haphazard at best. The cold, brick City Hall Plaza has been a windswept pedestrian problem area since the building opened. Brutal is a good word for it.

Brutalist buildings usually incorporate strong geometric angles and are generally made from pre-cast concrete elements that reveal the texture of the wooden forms used in casting. Though primarily made from concrete, not all Brutalist buildings are constructed in that material but instead may be rough and blocky in appearance and often express its structural materials, forms and functions on its exterior.

Peter and Alison Smithson built many of their projects with bricks. Besides brick, Brutalist building materials included glass, steel. rough stone and other textured substances. However, all buildings constructed of exposed concrete are not necessarily Brutalist. International Style, Deconstructivist and Postmodern structures all have made use of concrete.

Brutalist designs have often visually expressed the function of various parts of the building. This is true of Boston City Hall where projected parts of the building emphasize such things as the mayor's office and the city council chambers. Other buildings have emphasized other portions and functions.

Strangely, or perhaps not so strangely, Brutalist architecture was closely associated with utopian theories. This was especially true in Europe after the degradation of many cities and following urban decay after World War II. Clearly experimental, they rarely worked in any functionally positive way. These abstracted structures were unfriendly and often seemed to disregard the social and historical context of their settings.

Not surprisingly, criticism arose almost immediately because of the alien nature of these buildings. They seem to be set down in an environment that made them appear to be starkly out of place. Most, even in simple sculptural terms, were not visually appealing to less than trained eyes. Almost from their onset, in the early 1950's, there was little community support for most of them.

However, there were prominent architects who championed the notion of a relatively inexpensive construction and design. Architects seem to embrace the sense of "honesty" that the style invoked as well as their supposedly sculptural qualities. But most of all, Brutalist style strongly stated an anti-establishment, anti-conventional, thus totally modern approach to design.

This is clearly stated by Le Corbusier's public housing complex Unite d"Habitation (1952) and the Secretariate Building at Chandigarh in India (1953). These were early examples of the style. Besides the Smithsons, Louis Kahn (many buildings in Asia), John Andrews (who designed the Graduate School of Design Building at Harvard), I.M. Pei and Tadao Ando all designed major Brutalist works. Marcel Breuer's Whitney Museum can be considered a softened version of Brutalism.

Because the materials and building methods suggested cost-effectiveness, the style suggested embracing of the average person or working man or woman in a contemporary way. However, the actually built structures often resulted in high rise tenements which were frequently crime-ridden, overly crowded and ill-kept as well as  neglected by the responsible authorities.

Even the Smithson's "model" housing complex near East London's Dockland area, Robin Hood Gardens, was a particularly sad example of Brutalism gone bad.  The concrete did not wear well and looks particularly forlorn in the usually grey London sky. The concept of anti-vandalism initially associated with the tough concrete material was not envisioned with graffiti all over it or degradation from decades of acid rain chemically reacting with the concrete compound's elements.

Other bad translations of Brutalism style resulted in retail concrete mega-boxes that were developed as the ubiquitous shopping malls. Happily, these are losing their preeminence as shopping destinations. The cavernous concrete walls never added much grace to or reinforced much affection for the retail experience.

Besides a number of civic buildings, there were a large number of university and college campus expansion projects during the 1950's and 60's. Noted architects like Paul Rudolph designed civic and many campus buildings. One of his well known Brutalist buildings is The Hurley Building on Staniford Street in Boston. Ironically, it is the home of the Massachusetts Department of Mental Health and it served as the State Police Headquarters in Martin Scorcese's film "The Departed."

He also designed the much maligned (renovated and expanded in 2008) Yale Art and Architecture Building in 1958 and the University of Massachusetts at Dartmouth, MA campus beginning in the early 1960's. UMass-Dartmouth is not considered a beautiful campus by either visitors or critics. Yale's Art and Architecture Building was set on fire in 1970 presumably by irate students. Fifty years after it was built, it was extensively renovated and expanded. Perhaps, the building is much better now?

Many university campuses were touched by the Brutalism style including the State University of New York at Buffalo, one of the least appealing campuses in the world, along with individual campus buildings at the University of Toronto, Ryerson University and York University all in Toronto, Churchill College at Cambridge University, and the Aula at Delft University in the Netherlands among others. Some urban myths suggest that the buildings were built to thwart urban terrorists during the 1960s and early 70s.

In reference to Brutalism, HRH Prince Charles spoke for many if not eloquently at the Corporation of London Planning Committee's annual dinner in 1987 by saying, "You have to give this much to the Luftwaffe, when it kinocked down our buildings, it didn't replace them with anything more offensive than rubble." Great Britain has been notable in tearing down some of the least appealing of its Brutalist structures.

In recent years, there has been a small revisionist outbreak in architectural circles both in regard to critical thinking as well as reappraisal of the Brutalist style. The argument goes that these structures were attempts at visionary sculptural expressions that were disliked more for their poor maintenance and lack of proper management than their design.

It is debatable about the quality or even likeability of design of various Brutalist edifices. Most of these structures now appear aesthetically dated. But aesthetics are often a matter of taste. No matter what is said, these structures are generally not well liked by the general public. Expensive to clean, their material  nature is rather prickly. Alas, Brutalist buildings like Boston City Hall are the porcupines of architecture, very hard to embrace both visually and tactilely.