A Special Day In Miami Beach 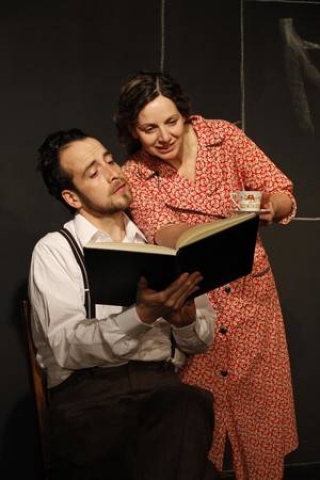 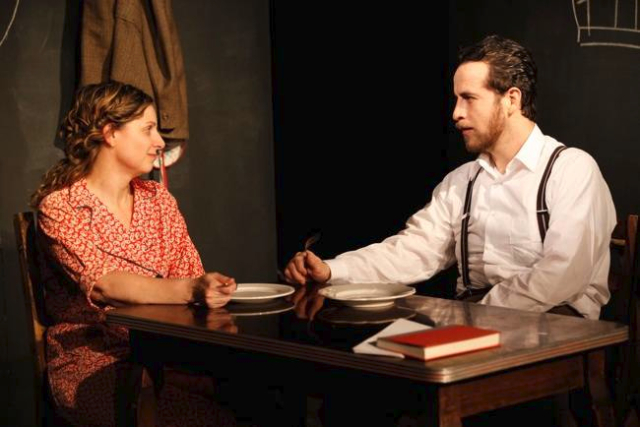 You might have seen the 1977 Italian, Academy Award-nominated film “A Special Day” (“Una Giornata Particolare” in Italian).

But you likely haven’t seen it performed on stage in the ingenious manner Miami New Drama is presenting the comic, touching story. You have four more chances to do so, and if minimalist, innovative and non-traditional theater captivates you, it’s wise to get a ticket for a special day (or night) at the theater.

Miami New Drama is a bold, daring Miami Beach nonprofit theater company that has been tasked with breathing new life into the historic but in recent years dormant Colony Theatre on Lincoln Road. During its young existence, Miami New Drama has scored hits with such thought-provoking, timely shows as the funny and touching musical “The Golem of Havana” and the riveting, participatory courtroom drama “Terror.”

Literally chalk up another triumph for Miami New Drama for its entertaining, engaging and unpredictable production of “A Special Day.”

You’ll get your chance to draw and/or write with chalk, just as the two talented performers do while they’re enacting the two-person play. It is set during the late 1930s when Mussolini and Hitler met in Rome, as Italy celebrated the rise of Fascism.

“We make theater to change society,” he writes. “To inform ourselves, to provoke ourselves, to make us think. To light a spark. It’s no coincidence that the art of theater has been banned by almost every authoritarian regime.”

Bravo, then, to Hausmann and his crew for, in essence, thumbing their noses at leaders of such regimes. They’ve shown such defiance by staging a play that not only informs and provokes, but celebrates the creative element of live theater.

The play is set during a time when such an authoritarian regime (Fascism) ruled Italy. But the play is also relevant to the U.S. today; many fear that the current administration is slowly but surely whittling away the rights we’ve taken for granted since our country’s founding.

The production’s two performers, Ana Graham and Antonio Vega, who are directing themselves, reinforce the creative aspect of live theater by drawing with chalk scenery onto the set’s walls before “using” those scenic pieces.

The actors are using a minimalist approach in which they don’t bother in the least to hide from us their creative process. It’s obvious, for example, when the phone is ringing that Vega is making ringing noises with his mouth. When Ana’s character speaks to someone outside the apartment, it’s obvious that Vega is serving as that person’s “voice.” Ditto when a talking bird who seems intent on making the characters chase after it repeats phrases. Again, in mostly plain sight, Vega is mouthing the words of the bird which, like other scenic elements and props, aren't present, so they force us to use our imagination.

During the reviewed performance, it immediately became obvious that audience members enjoyed seeing the performers create theater magic openly. Well, mostly in the open; Vega covered his mouth, for example, before speaking as the bird, which further increased laughter in the audience.

There’s plenty of on-stage humor, from that “escaping bird” to Vega’s character riding a motor scooter in the other character’s apartment.

The result is a fast-paced, sometimes frantic and unpredictable day or night at the theater that keeps the edges of our chairs warm while we wait in anticipation as to what will come next.

But all isn’t bright and light-hearted in “A Special Day.” Vega’s character, an anti-fascist and a homosexual, has been fired from his job as a radio broadcaster due to his sexual orientation. Meanwhile, Graham’s character has been left behind by her unfaithful husband, forced to look after their six children while performing household chores.

Vega’s character is even bent on suicide to the point that he presses a gun to his head. He’s metaphorically walking through a storm, but, to paraphrase the famous lyrics in “Carousel,” he’s not walking alone.

The play shows that even in the darkest moments, a flash of hope and happiness can emerge. The pair dance and laugh, but they’re hardly like the folks in “Cabaret’s” Kit Kat Klub, who either don’t care about or are blind to the emerging threat outside the celebratory aura within that seedy establishment. This couple is ever-aware of Fascism’s growing presence in their country.

The colors of the apartment reinforce the darkness and danger enveloping Italy. The walls upon which the characters draw are a shade of gray that you might find within a prison. The higher portion of the stage is black. On either side of the stage, we see two doors leading outside, but we cannot see anything; it is pitch black.

This is a strong production, featuring performances blessed with spontaneity and palpable emotion. Graham and Vega seamlessly transition from one emotion to the next. They are, however, sometimes difficult to understand with their thick accents.

The production’s other drawback lies in its uniform realistic lighting throughout. This play is told in a non-traditional, non-realistic way and the lighting could reinforce that.

All in all, though, Miami New Drama brings “A Special Day” to life in in a unique way…continuing its streak of strong productions that confront head on politics and important issues.

As this production proves, it hardly hurts to have some fun in the process.