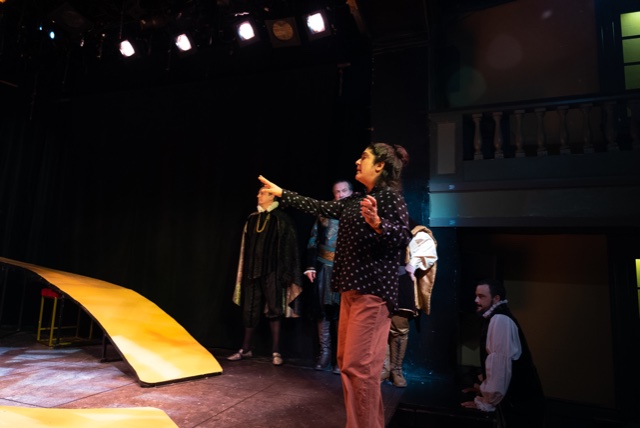 Leyma Lopez at work at Repertorio 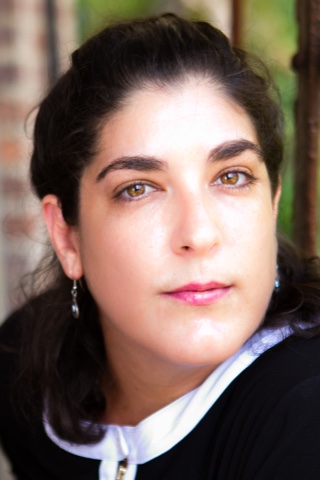 Berkshire Fine Arts. (BFA): Do you think our expectations and views of marriage have changed radically in 400 years, or to what degree do you see us as still there with Nise and Finea?

Leyma Lopez (LL): The idea of marriage in western culture has evolved and diversified a great deal, but still today, there is a certain Machista attitude from many points of view. This of course influences women’s behavior and the female position. It is because of this that “La Dama Boba” continues to be a necessary narrative these days, even though it was written over 400 years ago by Lope de Vega it is still relevant. Precisely because of this, my main characters travel through time, assuming a position of empowerment against the social canons that have transcended through the centuries. Nise and Finea may very well be a mirror to contemporary women, but today we have the right to decide how and what we want for ourselves. This has changed.

BFA: You have explored these issues from a comedic perspective in Filomena Marturano and Valor, Agravio y Mujer. Is there any particular reason why you have chosen to tackle this rather prickly topic with laughter?

LL: I have explored these texts from the deepness of its dramaturgy, from what it was originally written; my goal is to reach the most intricate aspects of them and make them come alive. “Valor, Agravio y Mujer,” written by Ana Caro in the XVII century, like its title shows, has no aspects of comedy. Here, the color and rhythm of the piece, brings up that air of comedy where the quest of Leonor, as a woman who avenges her honor and demystifies the myth of Don Juan, rests. What I’m most interested in, are the story and its protagonist. They are great texts and my wish is that the audience understands the story deeply, if this brings about laughter within them it means that the story is reaching the audience and being understood.

BFA: The Repertorio actors are incredibly talented. As a director how do you experience working with a group of such seasoned actors?

LL: I am not a director whose creative process is a closed set and only my criteria are imposed. I bring a myriad of ideas and ways that can lead us to my view of the play from the first rehearsal. When the exchange happens with actors of extensive artistic trajectory, the experience is enriching. In Repertorio I have the opportunity of directing more than one play with the same actors and in this negotiation, (as I call this exchange between actor/director), I always learn and unlearn. I enjoy watching each of them create during the process. The goal and focus I propose is the same, but the roads to reach each of them, can vary. I have discovered the very rich differences in their distinct methods or schools of thought. Orchestrating all these different energies is the part of the process I enjoy the most. The cultural diversity within the same cast, offers an infinite variety of nuances. When working with many and diverse actors the challenge is to give them a proposal that engages and challenges them and never lets the door to boredom open.

BFA: How do you see yourself in the role of a director fulfilling Repertorio's mission: bridging the classical and modern experience?

LL: As a director I try to dust off these classic works and make them easier to understand, to find why and where the plot of their characters is alive in order to decipher the connection they have with us today. I believe this is how you bring up the contemporary aspect of the experience. It is the artistic mission that I share with Repertorio Español to promote and preserve the greatness of these magnificent texts of our Spanish and Latin dramaturgy.

We are taken back 400 years by the authentic costuming by Leni Mendez and assistant Gabriela Corretjer. The austere, simply rendered and subtly illuminated set by Robert Weber Federico (set and lighting design) hints at a palatial interior with a broad central staircase and two non-symmetrical ramps. We are in Madrid at the home of Higaldo Octavio (Frank Rodriguez). Rodriguez opens the scene in heated conversation with his friend Maestro Miseno, (Gerardo Gudino) tutor to his daughters. Despite the serious tone and the gravity with which the dilemma of the plot unfolds, Dama Boba is a comedy.

Octavio would like to see his two beautiful daughters Nise (Maria Fontales) and Finea (Zulena Clares) successfully married. Nise is a woman renown for her scholarly intellect, and much admired by poets and philosophers throughout Spain, but she has a very meager dowry.

Finea, on the other hand, has a dowry four times as large, but can not even manage a sensible sentence. She is the boba, best translated as booby, a person who lacks both intelligence and grace. The lopsided distribution of their dowries was made by their uncle. Perhaps it was to compensate for the disparity in their potential or perhaps, as Octavio affirms, because the man was none too bright himself. And so as our scene is set, Octavio is hosting their suitors in the spirit of paternal optimism.

Lope deVega is not simply setting us up for a good laugh. The play takes a sharp look at the meaning of the ideal woman. What attributes are truly important? Is there room in marriage for the intellectually driven woman? Is there room for the woman who cannot enhance her husband's social standing? Is economic security the real motive for our emotional commitments?

Lope deVega casts a doubtful shadow on the excesses of highly intellectualized romance, as well as and on the notion that good looks and fecundity are all that make for a good wife. It is worth noting that Lope deVega is at the center of Spain's Golden Age. Like Cervantes and Calderon he reflects a time of social change.

Lopez takes the modernity of these concepts as central to our experience. She has skillfully rearranged our introduction to both the plot and the characters and plunges directly into the juice of the drama. The reduced the number of extra characters helps to bring a powerful intimacy to the stage. We have moved beyond the stylization and rhetorical rhymes popular at the turn of the 16th century. The use of music (Dafnis Prieto) and dance (Omar Nieves) underscore the present nature of these questions in the 21st century.

Clares as the Dama Boba keeps smiles on our faces as she moves through her foolish persona into a woman caught by the inspiration of true love. Lope deVega is a romantic. He asks us to believe in love. As a comedy we leave satisfied by both its romanticism and its wit. And yet, although Lopez gives voice to some new social choices, we cannot help but wonder if our romantic sensibilities and matrimonial expectations have changed all that much in the last 400 years.

The play is presented in Spanish with true to meaning English subtitles by Sara Buitrago. For Spanish speakers who may wonder if 16th century Spanish is comprehensible. It is. It has changed far less than English has since Shakespeare wrote. Tickets here.