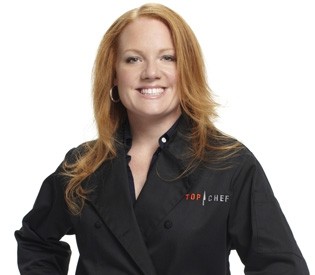 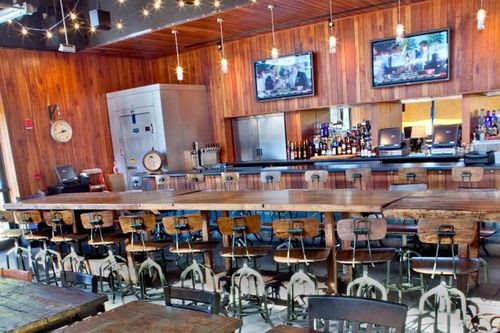 The less than comfy interior of the busy and noisy restaurant near Fenway Park. 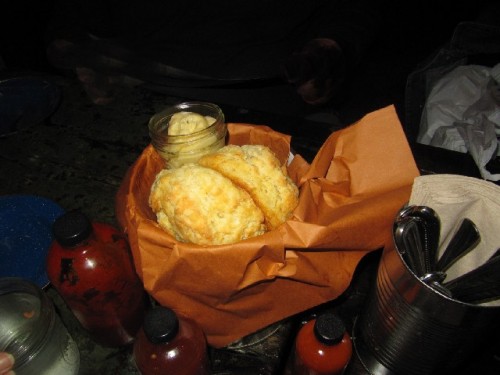 At ten bucks a shot these are billed as America’s best biscuits. 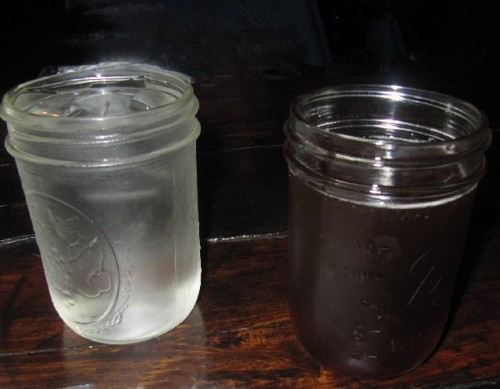 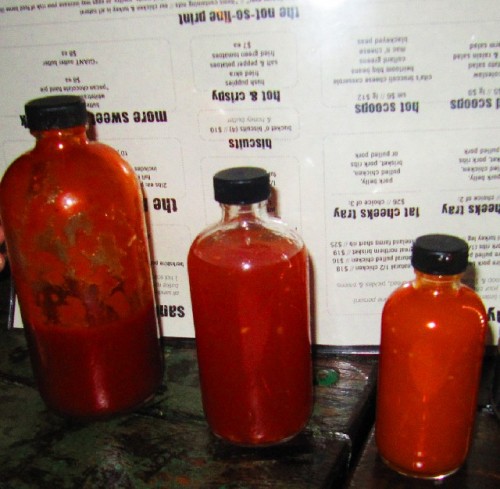 Sauces on the table come as Papa Bear, Mama Bear and Baby Bear with a killer kick. 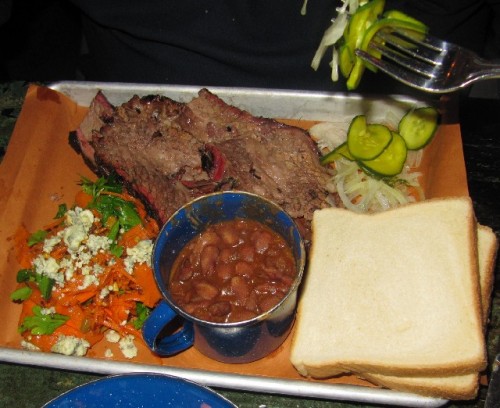 Miguel loved the brisket but not the side of baked beans. 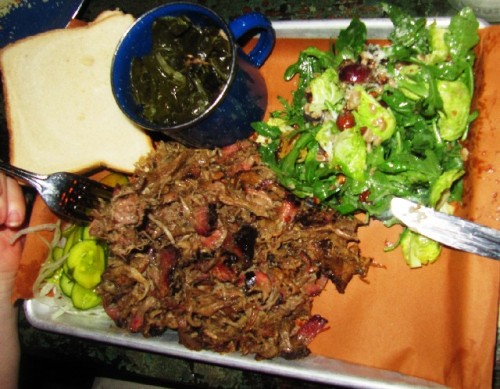 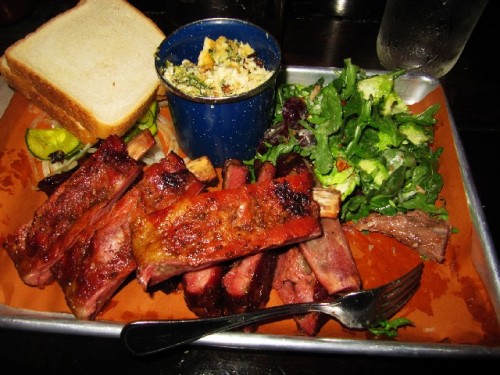 For Pancho the ribs were awesome and the broccoli/ cheese sucked.

During the first season of Top Chef Tiffani Faison came in second.

After a year of chowing down in the Barbecue Belt,  testing regional and family heirloom recipes  for sides and desserts, the talk of the town, with mostly rave reviews from foodies, has been her launch of Sweet Cheeks.

At 1381 Boylston Street (617 266-1300) just steps from Fenway Park it should be a home run with fans and diners during baseball season which is now looming large.

Its nascent reputation and excitement preceded our recent visit to Boston. A pit stop for the bulls (unfortunately Pancho couldn’t join us) was on the must see list for our itinerary. With Sweetie Pie our foodie Pancho was joined by a guest connoisseur “Miguel.” He had dined there previously and was particularly keen to try the brisket. It soon became apparent why.

Arriving at the crowded restaurant on a Tuesday night the hostess informed us that we would be seated when our entire party arrived. We put in a bid for 7:30 and became increasingly anxious when that time came and went. Some twenty minutes later there was concern about being seated as we were asked to wait for a table.

The room which is simple and open was packed and cacophonous. Over the din of the diners was the blast of an uninviting selection of music. By the end of the evening one was hoarse trying to have table conversation. The food was great, well mostly, but you shouldn’t have to shout over dinner.

Seating options were less than ideal. Initially, the hostess wanted to seat us at a high, communal table with stools. It was uncomfortable and not at all intimate to be rubbing up against perfect strangers.

Clearly this is not the destination for a romantic date or tete a tete.

On the table is a jar of random silverware. Beer and water are served in wide-mouth mason jars. Pricing is complicated. The dinner menu includes "trays" with one kind of meat ($15–$25), a "Big Cheeks" tray with two kinds ($24), or a "Fat Tray" ($26) with three. You can also order sandwiches, $6 more for two sides — listed on the menu as "hot scoops" or "cold scoops." Beef short ribs are available à la carte or as the most expensive tray ($25). Which is costly for just two ribs.

Bottom line, you need a degree from MIT to figure out how best to order. There is even an option to purchase your dinner by the pound.

Hey, I don’t know about you, but for me real down home barbecue also means affordable. This was like taking  the Levi Strauss jeans we grew up with, that were cheap and lasted for years, and turning them into ‘designer’ jeans for mega bucks.

Fer shure this here was Yankafied, upscale, designer barbecue with ersatz, down home, funky décor. Not.

The meat. Let us be clear. Was just sensational. As good as it gets even in the Barbecue Belt. Seems that Faison settled on Texas style with little or no rub, wood fire, slow cooking and restrained smoke. That doesn’t suit every dish but overall the taste was juicy, succulent and sensational.

We tried the pork ribs, brisket, and pulled pork "trays."

The sides, however, were a disaster. From ok to inedible.

Miguel insisted that we order biscuits which are huge, flaky, come with maple butter and are unanimously acclaimed at best in America. Not cheap at ten bucks. For biscuits! Which in a lot of rib joints come free. Or at least a basket of corn bread. Our meals, cripes, came with two slices of generic po white trash bread. We never touched it.

The norm of serving that white bread at a rib joint is to slop up all the extra sauce. Which is ironic because the meat at Sweet Cheeks comes dry. On the table are three bottles of descending size containing in the largest, an undistinguished, tomato based, sweetish sauce. The Mama Bear bottle was an ok version of North Carolina vinegar sauce. And in the small, baby bottle, is a jalapeño killer to apply sparingly. Used generously it is guaranteed to result in acid reflex in the middle of the night.

Ok. OMG. Ok. My pork ribs were awesome. They were nicely trimmed and served individually. I hate having to tackle a slab with knife and fork. This was the barbecue equivalent of easy lobster out of the shell.

I traded a rib with Miguel for a nice hunk of brisket. Again. Just sensational. No. Make that perfect. Up there on the all time list. A taste of Sweetie Pie’s pulled pork was ok. Good, not great. Dry as it was not sauced. A stringy pile of meat which mostly went untouched.

Much is made of the fact that the joint uses Berkshire Pork. Said to be fatter with more flavor. Critics rave about the pork belly as the best item on the menu as well as the super expensive short ribs. We’ll try that another time.

About those sides. Judging from word of mouth and reviews opinions vary greatly.

The couple seated next to us were actually foodies from the Berkshires. He runs a restaurant near Jiminy Peak the ski resort and she is a student at MCLA. They were super friendly. At Sweet Cheeks you can’t help but make friends. She had the three meat plate and particularly loved the brisket. She pronounced the heirloom recipe for ubiquitous mac and cheese as “The best ever.” While in an on line review it was described as dry, lacking in cheese and “Worst ever.”

On the recommendation of a friend who loves Sweet Cheeks I tried the broccoli and cheese concoction. Yuk. It was a horrid, overcooked mush. I love nice, crisp, al dente broccoli but one bite and this was fuggedddahboutit. Miguel had a similar response to the baked beans. Sweetie Pie loved the collard greens and we both liked the farm salad. Miguel was apathetic about his carrot and raisin salad.

None of us were tempted by the desserts: Butterscotch pudding, whitetrash fruit salad, or sweet potato hand pie at $6 each. Or the GIANT nutter butter at $8.

Bottom Line: If you are seriously into barbecue you have to check this out. It might be a good idea to bring ear plugs or learn sign language for table conversation.

At the risk of going deaf, yeah, we would go back. Huh? What did you say? Can’t hear you. There’s a ringing in my ears.

As to those hit and miss sides, well, you expect more from an almost Top Chef. Now we know why Frison came in second. In a contest won by inches the devil is in the details.