Dido of Idaho at the Ensemble Studio Theatre 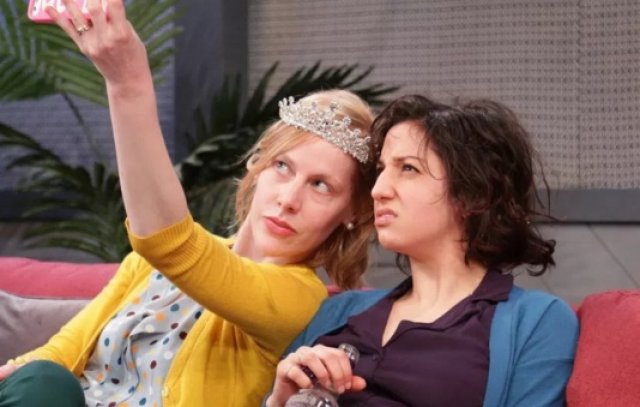 The playwright plays a beauty queen semi-bimbo. She is with her husband's mistress.

Dido’s Lament from Henry Purcell’s opera, Dido and Aeneas, is blasting out as Abby Rosebrock's Dido and in Idaho opens. The lament is familiar to appreciators of song. It is one of the most gorgeous arias ever written.

What does it evoke? Desperation, heartbreak, suicide. The romancing of an island Queen by a sailor who arrives, seduces and abandons when he is reminded that it is his duty to found Rome.

Michael embodying a modern Aeneas, is played as a hugging-bear of an intellectual by Curran Connor. He abandons no one in this play. He disappears after the first scene. His presence lingers as his wife and his inamorato become one of the oddest pairs of BFFs you’ve seen. This relationship is imagined with novelty and truth by the playwright.

While one of our civilization's founding myths is the prompt of the play, it loses traction as we move from life to after-life and back.

We veer out to the failed relationship of a mother and daughter. There is an odd but satisfying relationship between Michael's wife, Crystal,  and Nora, the modern Dido. Nora theoretically has the brains.  Crystal is modeled on Lavionia, who Aeneas married in Rome.  She is imagined as a dullard.

The Nora role is juicy and played to the hilt by Layla Khosh who has every infirmity you can imagine and then some thrown at her. The playwright plays Crystal, the abused wife who triumphs. It is her role that is most difficult, always teetering between obtuseness and brilliance. Rosebrock magically walks this tightrope. She at once stuns and moves as she remembers her own violent high school years, and then moves forward to the forgiveness only Nora can bestow.

Hovering over the present story is that of the mother, a lesbian, and her girlfriend Ethel. The mother has religious convictions that enrich the character and make her interactions with the daughter she claims to be a Monica Lewinsky type more difficult. This relationship is resolved in a surprising zone most of us imagine but do not live in.

Nora's Mom Julie, and her partner Ethel, exemplify the best that alliances can offer:  "You know it's love when there's devotion, fidelity, effort, respect, trusting, sex." Dalia Davi creates a somewhat sane religious zealot as Mom.  Dawn McGee mixes humor and a down-to-earth stance in her gentle yet compelling portrayal of Ethel.

The playwright’s great strength is dialogue which is often amusing, even laugh-out-loud comic.

Ensemble Studio Theatre partnering with Radio Drama Network uses a small space well.  Scenic designer Angelica Borrero takes us from living room to living room and into other worlds opening with smooth transitions.  Direction by Mikhaela Mahony keeps surprise and ah-ha moments puttering along at a sure fire pace.

This is a promising play from Youngblood EST, a talent incubator of the first order.

Dido of Idaho runs through April 8 at Ensemble Studio Theatre’s Curt Dempster Theatre (549 West 52nd St., between 10th and 11th avenues). Evening performances are at 7 p.m. Mondays and Wednesday through Saturday, and at 5 p.m. Sunday; matinees are at 2 p.m. Saturday. Tickets are available athttp://www.ensemblestudiotheatre.org/current-season-1/2018/5/9/dido.