On Site Opera at Museum at Eldridge Street 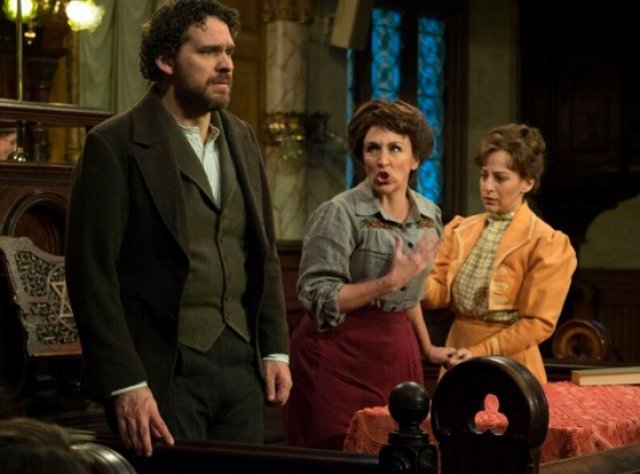 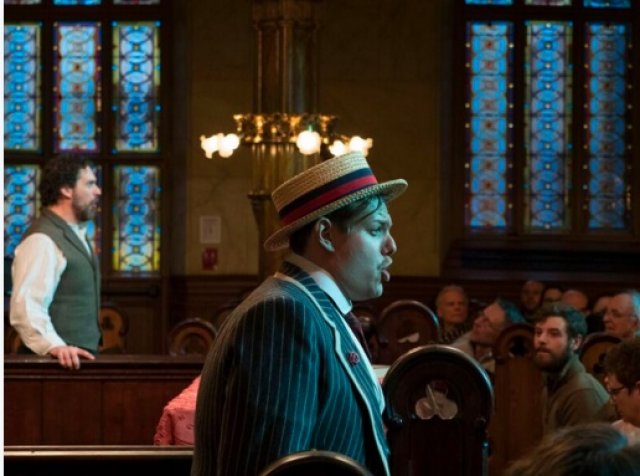 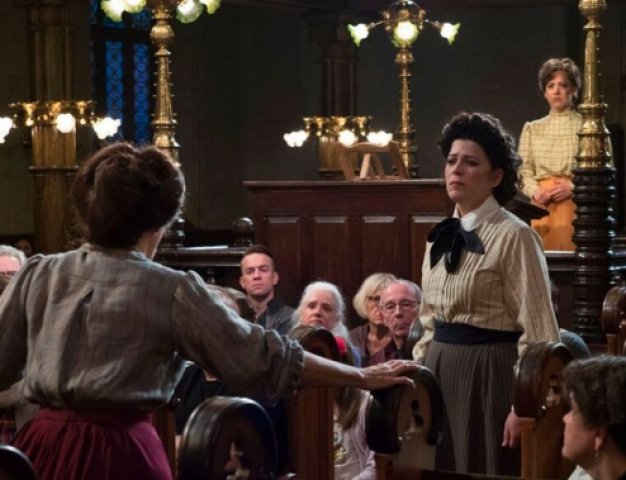 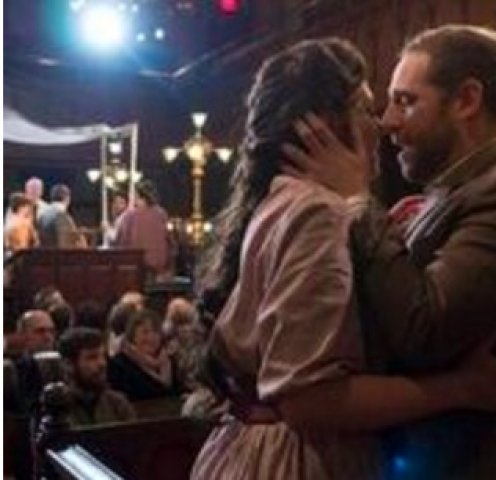 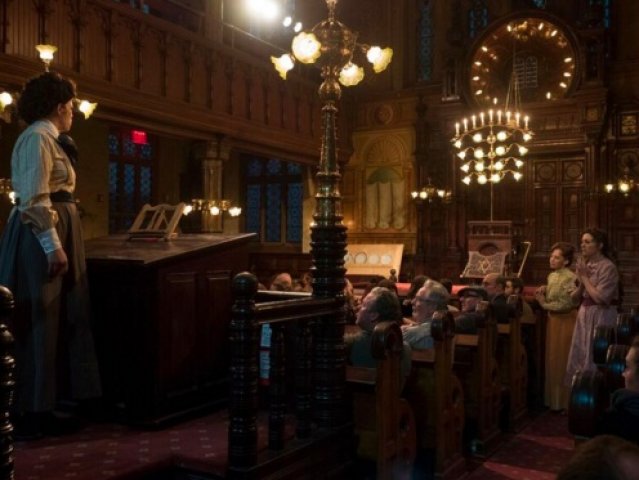 Sadie (Blythe Gaissert) faces off her with her sisters (Jennifer Zetlan, Cree Carrico) 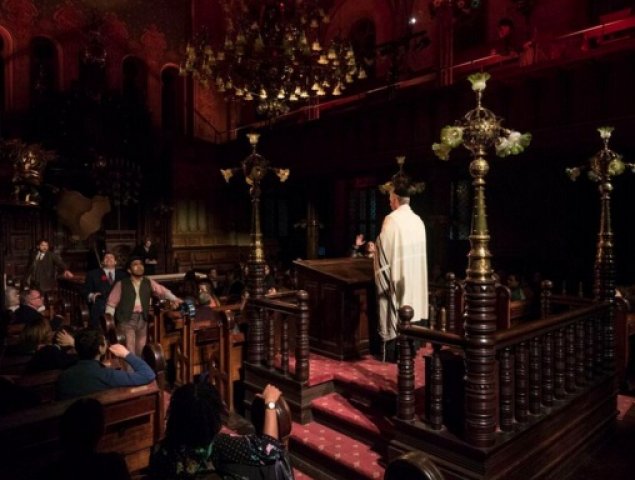 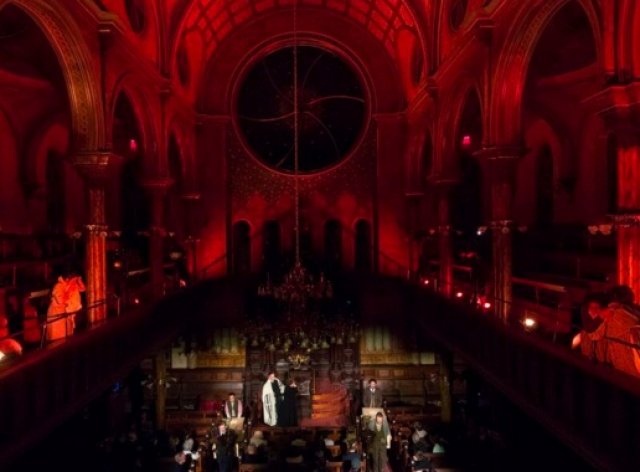 The Triangle Fire and the funeral

The Triangle Fire of 1911, in which more lives were lost than in any other disaster before 9/11, flames in the background of Ricky Ian Gordon and William Hoffman’s opera Morning Star.

The powerful impact of the event on a family, which for Gordon echoed his own family history, is dramatized in music and story.

Gordon’s grandmother worked in the Triangle factory, and did not perish because she did not report for the work the day of the fire.

Whatever the reason, Gordon’s music has a special feel in this piece. It is both harsh and melodic. Dissonance is soothed by jazz rhythms, ballads and Tin Pan Alley references. He weaves the various elements together in the score and engages us completely.

On Site Opera chose this opera for production because they located a perfect setting, The Museum on Eldridge Street in lower Manhattan. Within the Museum is a Synagogue built in 1887, a period in which waves of Jews came to New York to find a new life.

Gordon is able to contrast the hope of recent immigrants and the reality of the lives they were able to create. Hope abounds in songs like “Morning Star,” (Venus, the goddess of love). At the same time, women consigned to home life who were not able to pursue their dreams, are finely etched. "If I'm Not Allowed to Sing" is one sister’s cry for liberation. She will leave her husband and is hopeful, at 38, that she will be able to launch a career, although her husband keeps saying, "Thirty-eight is too late."

Three sisters must be the perfect triangle for drama. The eldest girl forces her mother’s marriage and ended the mother’s own career as a singer. This family came from Latvia, which certainly in this generation we have come to know as a breeding ground for musicians.  Nelsons, Opolais, Garanca, and Atonenko were all born there. One prime subject of the opera is the voice.

Gordon composes wonderfully for the human voice. While characters sometimes stretch and agonize, it is within the range and gives us an opportunity to enjoy again an On Site regular like Jennifer Zetlan.

Pearl's "So Many Colors," in which the young woman, an African-American from the rural South, laments the loss of her home and family, is beautifully sung by Chrystal E. Williams.

The widowed mother, struggling with her three daughteres, is memorably created by Emily Pulley. Joshua Jeremiah, Blake Friedman, and Andrew Lovato are touching men whose part in these women’s lives is beautifully sung.

Eric Einhorn, the brilliant moving force behind On Site Opera, directed. Remarking on the even tones in the cavernous Synagogue, whose aisles and balconies became parts of the set, Einhorn said that he had not maximized seating by packing more people in, but kept people located in pews where the sound could be best heard.

Geoffrey McDonald is On Site’s Music Director and conducts with seeming ease in often awkward locations. He will be leading Lembit Beecher’s new opera at the Perelman Theater in Philadelphia this fall, and travels the country participating in events like the Omaha Opera Festival. His contribution to making music on location for On Site is remarkable. The music always rings out, even if it is hidden at the back of a synagogue or emerges from daffodils.

Summer Lee Jack created costumes to reflect the period. Twenty one years pass between the first and second acts, and Jack ages characters in dress. The mother becomes dumpy. Sadie, the wicked oldest sister, spiffs up as she becomes a successful entrepreneur.

Shawn K. Kaufman cast the red of fire over the Synagogue when the Triangle disaster occurs. Less obvious are spots for arias, and a softening of the light for recitative.

This production is sold out.   Next up for On Site is a production of Mozart’s Secret Gardener at Caramoor.