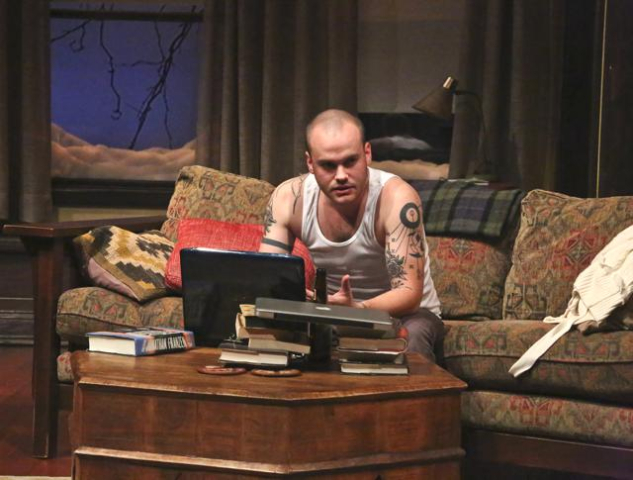 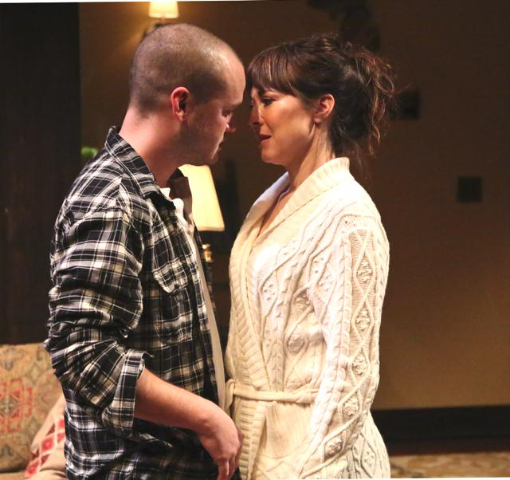 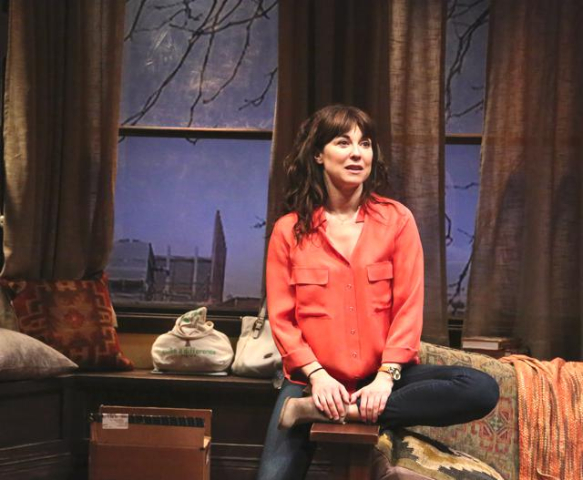 In the past, one could usually rely upon the Geffen Playhouse to present new and/or edgy plays that captured the attention of audiences. This was a recipe that resonated with their wide age demographic. Toss into the season a couple quality plays, and the Geffen had another successful season.

I’m not quite sure what’s going on with their play selections of late. But the current offering at the intimate (114 seats) Audrey Skirball Kenis stage of the two theatre complex in Westwood, comes off as flaccid as the on-stage story it’s trying hype with the provocative and sexy title of “Sex with Strangers”.

In “Sex with Strangers, the plot revolves around Olivia (Rebecca Pidgeon), an intelligent, mid-career, one-book novelist who is having second thoughts about her ability is a writer, and Ethan (Stephen Louis Grush), a wildly successful, young, hyper-energetic stud/blogger with an ego to match, who meet in a mutual friend’s borrowed cabin on a snowy winter night in Michigan.

Apparently, the friend has neglected to inform Olivia of the cabin arrangements. The wary Olivia is not too thrilled with the coarse and boorish behavior of the younger Ethan who is oblivious to his manner. As the ice begins to thaw between them over glasses of wine, conversation and ‘writer talk’ about the state of a changing literary world, young hormones win the day over the resistance of older hormones being awakened in Olivia. Echoes of ‘summer romance’ novels begin to appear in the plot.

It’s natural to expect, in literature at least, for opposites to attract. It’s a staple plot device that has served authors, readers, and audiences alike for centuries. However, in ‘Sex with Strangers’ it’s hard to become engaged in a banal two character play that is nowhere even near the zip code of reality and believability. Yes, sex is how we all got here; it’s an intoxicating experience, an addicted activity (thank God) that keeps us all on the treadmill of life. But sex is not a spectator sport, “Oh, Calcutta!” notwithstanding. And, we’re still capable of following plot points without actually seeing them. To her credit, director Senior does a tasteful orchestration of the sex scenes.

If we are to become engaged in Olivia and Ethan’s story, in order to root for either, somethings would have to change. He’s tattooed all over his upper body, and looks as if he’s just one speeding ticket away from landing a month’s stay in the city lock-up. Olivia, as played by Pidgeon, is just too low key and one dimensional, with a very expressionless face. I kept wondering what the females in the audience were thinking about her choices in men. I expect the males in the audience were thinking ‘what’s the matter with her? He’s a loser, dump him and go back to reading a good book instead!’. Of course, if that were to happen then we wouldn’t be spending an evening in the theatre, eh?

Yes Ethan, as played by Grush, does comes across as a con man at first, and later not so much but as just another of society’s flawed, youthful young man of promise who never reached his full potential despite his early success in a blogging career. Even in my rant…no spoiler alerts here.

Senior’s creative team has scenic designer Sibyl Wickersheimer providing a cozy cabin set which then doubles for a Chicago apartment in the second act. Lighting designer Joshua Epstein’s warm and mood inducing low key lighting provides just the right amount of light to see and appreciate the costumes of Olivia as designed by Elisa Benzoni. Sound design is provided by Cricket S. Myers.

“Sex with Strangers” performs on the Geffen Playhouse’s Kenis Stage, and runs through April 10, 2016.