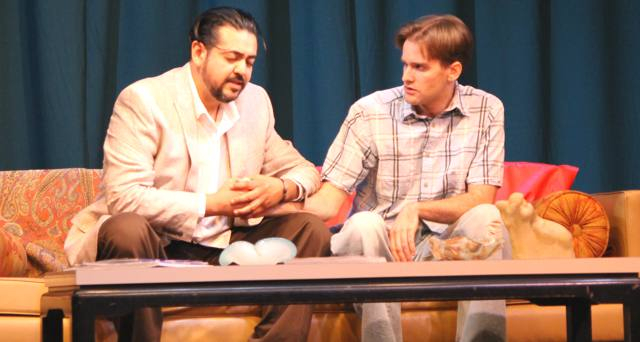 Tony Padilla, award-winning playwright/director, and Founding Producing Artistic Director of Desert Ensemble Theatre, for years preferred the shorter, one-act format to tell his stories.  When he finally did branch out into two act plays I think he found his groove. Padilla has covered a broad spectrum of genres and subject matter over the last ten years, winning accolades and awards along the way for himself and for the actors who perform in his productions.

His compelling 2016 drama “Endangered Species”, explored how human beings react differently to incidents and situations outside their comfort zones, and once again won awards for the production. It is one that still remains with me as an example of Padilla’s insight into the human condition.

In his latest comedy  “Lovesport”, now performing on the Pearl McManus Theatre stage at the Palm Springs Woman’s Club, Padilla takes a look at gay marriage from the point of view of one couple who took the marriage plunge and one couple that didn’t. Everyone under forty in America, no matter your orientation, it seems, can relate to this issue.  Guess what?  To tie the legal knot or to leave one’s status to the interpretive whims of today’s society, for example, to shack-up or not, is now a non-issue in many social circles.

The story centers around the twenty-five-year married couple Josh (Jerome Elliott) and his husband Marty (Alan Berry).  They are a committed, non-open marriage, couple who are comfortable in their own skins and with their marriage state.  Following a dinner party with mutual friends, Marty has invited a young couple Gary (Cameron Shingler) and his partner of two years, Ben (J. Gazpar Ascencio) back to their home for nightcaps and conversation.

Gary is hyped on the subject of bringing a baby into their relationship.  Ben, on the other hand is not warm to the prospect of sharing his lifestyle or home with a baby. How these two couples maneuver the shoals and rapids of gay lifestyle in America, especially after too many glasses of wine and whiskey, is the meat of Padilla’s play Some may see echoes of “Virginia Woolf”, others might see shades of “God of Carnage”.  And like those plays, “Lovesport”, also has moments of comedy, pathos, poignancy, and resonance.

It’s difficult to hit a home run every time at bat even for the best of pro baseball players Pro playwrights who direct their own plays, are not immune from the guilt of not being able to throw their ‘theatrical babies’ out with the bathwater, when it might be called for.  “Lovesport” is relevant in today’s society with some excellent comedy lines, however, it’s in need of some tightening, pruning, and sharper pacing.  It also shoots itself in the foot with a lack of comedy energy. One could almost see it being performed without an intermission if tweaking here and there were done.

Jerome Elliott is more familiar to desert audiences and his fans as a club and cabaret star. So his Josh portrayal will come as revelation to them, as it was to me.  Alan Berry, a former touring Rock ‘n’ Roll musician from the desert, plays Marty, as a spouse that anyone would be happy to have around the house 24/7.  There is nice on-stage chemistry between Elliott and Berry, which helps set the tone of the play.

Cameron Shingler, has the unenviable role of playing the nagging spouse who wants a baby to care for and raise even after his partner makes it quite clear that he’s not interested.  Both gay and straight couples have been coming to grips with this issue for millennia.  J. Gazpar Ascencio, plays the ‘heavy’ as Ben.  It was jolting in the short second act when Ascencio finally explodes in frustration in a scene with Shingler. There is a lot of heated yelling taking place on that stage for a comedy.  Sometime less is better making it easier for shaping and shading performances.

“Lovesport” performs on the Pearl McManus stage at the Palm Springs Woman’s Club on Friday and Saturday evenings at 7:00 PM and on Sunday at 2:00 PM until March 26, 2017. For reservations and ticket information call the box office at 760-565-2476.