Comedy-Drama About the Past and Bullying 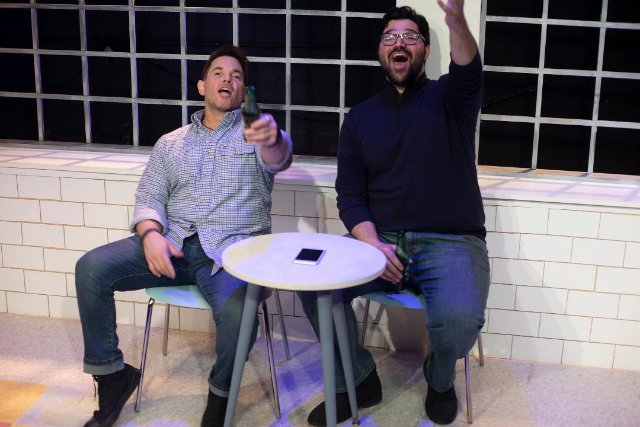 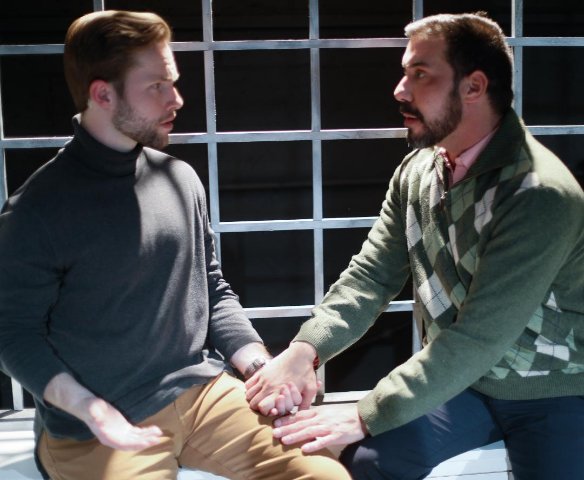 William Faulkner wrote, “The past is never dead. It’s not even past.”

Specifically, Warren noted that, “We are products of our past, but we don’t have to be prisoners of it.”

Actually, From White Plains’ characters are clearly (and, judging from the set design and sound effects) literally prisoners of their past.

In fact, they are trapped in a suffocating, spinning web of guilt, shame, revenge and sorrow which proves that time does notnecessarily heal all wounds.

Quite the contrary, the effects of the past, however many years back, can fester like dissent in today’s halls of government.

The emotionally injured in Perlman’s play include Ethan Rice and Dennis Sullivan.

When the play begins, both had graduated high school some 15 years ago. In particular, Ethan thought his acting like an “asshole” as a teenager would have no bearing on the present.

How wrong he was.

Indeed, Dennis, now a screenwriter, makes sure that karma catches up with Ethan.

From White Plains begins innocuously enough: Ethan and his friend, John, are watching the Oscars. Then, suddenly, the bombshell hits them like a Mike Tyson-delivered knockout. Dennis mentions Ethan as the inspiration behind his Oscar-winning film. Dennis has based it on Ethan’s alleged role in the suicide of the filmmaker’s gay best friend.

Of course, nobody can prove that Ethan bullying Mitchell Cole directly led to his suicide. And yes, Ethan has a point: Who can prove that Dennis’ film is factual?

Still, the fact remains that we’re left to ponder many questions about remorse, revenge, regret, responsibility, and forgiveness.

Listen to Dennis’ statement, which he airs on social media.

“Ethan Rice is a hateful, deceitful, poor excuse for a human being. This world would be a better place if Ethan Rice wasn’t in it and Mitchell Cole still was.”

To be sure, the playwright is sensitive as to the magnitude of the school bullying problem.

So true these days.

For his part, Dennis blames the bullying and its roots on politicians, parents and general apathy among people, including Greg and his folks.

“Their own son believes it’s better for him to be in the closet than introduce himself and who he is to his parents,” Dennis angrily remarks.

To his credit, Perlman shows that these two men still love and care deeply for each other. In fact, some scenes between Dennis and his boyfriend are sultry, sexy and steamy.

Set pieces are minimal. They merely suggest locales such as apartments and a bar. But the symbolic set’s main structure is a wall with prison bar-like squares. Through them, one sees darkness. The actors, at times, look out from behind the bars, suggesting that they are “inmates.”

In addition, Hart’s sound design includes noises suggesting the shutting of a cell.

The symbolism is clear: These characters are stuck in a “prison,” unable to move on from past actions. However hard they may try to escape their past, it has crept up on them. Now, it suffocates and confines them.

Ironically, Mitch freed himself from the grips of bullying, Dennis notes toward the end of the play.

“I’m jealous that he got to escape (your voice),” he tells Ethan.

The quartet of actors delivers passionate performances without appearing to force emotions, which always come across as sincere.

While cast members disappear into their characters through mostly masterful acting, a couple of improvements would further strengthen their portrayals.

For instance, at the beginning, Ethan (Todd Bruno) and John (a natural, dreamy and sincere Alex Alvarez) need to register more shock and for a longer period after they hear Dennis (Billy Hutto) mention Ethan’s name on television.

Also, there are quite a few silent moments in Perlman’s script. The actors could better use these instances to express their feelings and emotions non-verbally.

With that out of the way, the actors, some of whom will be new to South Florida audiences, shine in these roles.

As Dennis, Billy Hutto, an actor with dark blonde hair, beard and piercing brown eyes, conveys a myriad of authentic-seeming emotions with those eyes. They communicate, at turns, bitterness, sarcasm, intensity, passion, vulnerability, emotional pain and anger. Of course, these emotions also come clearly and convincingly across through Hutto’s voice.

Urgency, intensity and sometimes irrationality seem to emanate from every fiber of Dennis’ being, as Hutto portrays him.

By contrast, Dean Nigro invests Gregory with a quieter demeanor. Nigro’s Gregory possesses a calmer voice, one of reason, but not without frustration. Picture a more youthful Donald Sutherland.

Clearly, Gregory is taken aback by his boyfriend’s hateful remarks toward Ethan. It’s also clear, through Nigro’s performance, that Gregory feels Dennis is more bent on revenge than on the couple’s relationship.

A dark-haired and dark-eyed Todd Bruno has a difficult task portraying Ethan. He must convince us that Ethan was once a bully. But at the same time, he cannot turn Ethan into an entirely hateful character, one who is completely beyond redemption.

His Ethan starts out as a cocky, impulsive, frat-like dude who swears as though it’s second nature to him. But as the play progresses, he gradually softens. Slowly, but surely, a sense of vulnerability envelops Bruno’s Ethan. You feel as though he truly believes his world is spinning out of control and he’s emotionally devastated. We’d feel for him even more, however, if he shed a tear or two.

Also, Perlman could develop Ethan more. For instance, at one point, we learn that Ethan loses his job as the revelation of what he did in high school comes to light. But what was Ethan’s vocation?

This production makes a so-so ending stronger. Gregory, the last character to talk, is looking ahead toward the future. He is bathed in light (credit Joe de Sousa for creating focus, intensity and enhancing mood with his lighting design).

Also, wisely, de Sousa leaves Dennis and Ethan in the dark at the end. Both men are looking through the bars, into the darkness. They seem to have moved on, if only for their sanity.

But emotionally, they’re stuck with the demons from their past — with seemingly no freedom in sight.