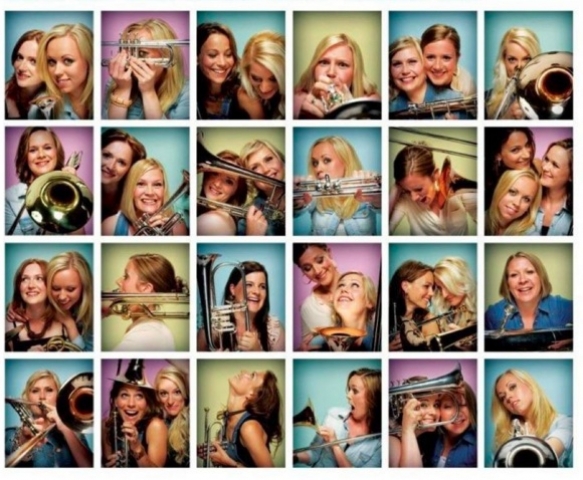 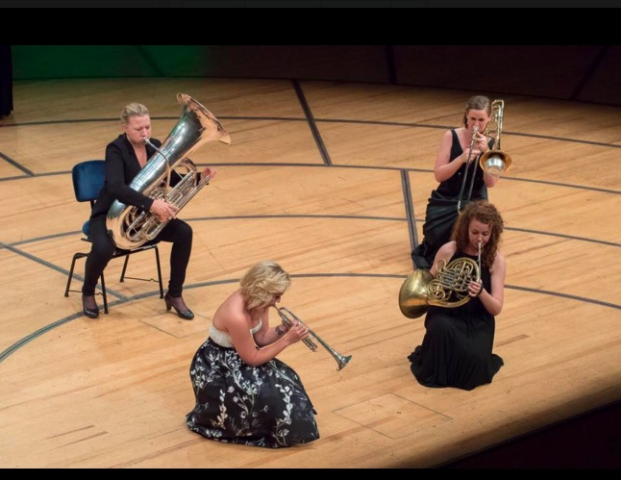 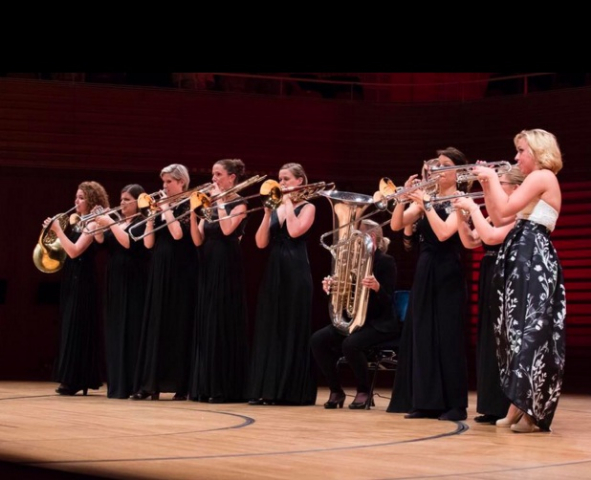 There is nothing like a brassy group of dames 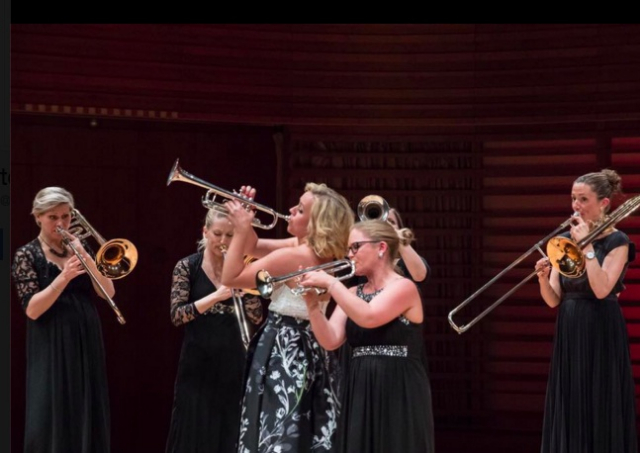 Tine Thing Helseth is a Norwegian trumpet player who has performed at the Nobel Prize Awards ceremonies and with orchestras across the globe. A decade ago, she put together a group of fellow female brass players and today they form tenThing expanded to a total of ten players, four on trumpet, four on trombone, one on horn and one on tuba.  The group have been touring the US to enthusiastic audiences. They are as infectious as they are intimate.

Helseth leads the group.  All ten of these long-stemmed women are glamorous.  Helseth is distinguished by a print skirt, which swoops as she choreographs the group when they are off book.  Edvard Grieg's Praeludium opened the evening and was heraldic.  Helseth than spoke about Grieg whose pieces were performed in motion across the stage.  The Grandmother's Minuet was a cause for dance.  A lullabye had some instrumentalists crouching and bending over an invisible bassinet. Trolls are Norway's mythical giants or dwarfs and notoriously ugly.  Neither the music nor the ladies matched the characters.

Brass instruments are lip-vibrated wind instruments or aerophones.  The air is set in motion by the players lips vibrating in a cup-shaped mouthpiece.  Not all the instruments that make up the group are actually made of brass.  No matter.  The shimmering, glimmering trumpets and trombones looked and sounded risqué-brassy on stage.

Helseth's tone is clean and melodious.  She arches back and weaves her musical lines. Her gifts are rare and seem easy for her to share. We can enjoy quicksilver runs of notes and flawless execution,  which is not too smooth. She is versatile and can unleash passion, but remains in control.  An adventurer, you want to join Helseth on the journey.

Trombones of course change the length of their tubing by sliding.  The four ladies were unerringly accurate as they slid.  With the exception of one piece by Dutch composer Jan Koetsler, all the other pieces performed were written for other instruments.  Jarle Storlekken regularly arranges for Helseth and well understands the instruments he is putting on display.

With the trombone, notes are often carried one to the next.  The overall impression is one of presence in short, sharp passages punctuated by staccatos.  It would have been fun to hear Mozart unleash trombones in the dinner scene from Don Giovanni.  Instead we had a Rondo alla Turca in which the double beat arrangement displayed shaped phrasing and subtle dynamics.  The horn was mellifluous, often suggesting a distant lyricism.  During one performance, the ladies spread across the orchestra seats, thrusting their instruments out at audiences members who responded with shock and awe.

Hands were seldom in the bells.  Handel had originally called for just two horns for his Water Music.  He would have been delighted with these ten, quintupling the Fireworks portion of his famous barge piece.

The tones were boisterous and clear.  Technique on display was impeccable and versatile providing an evening of infectious and intimate brass.